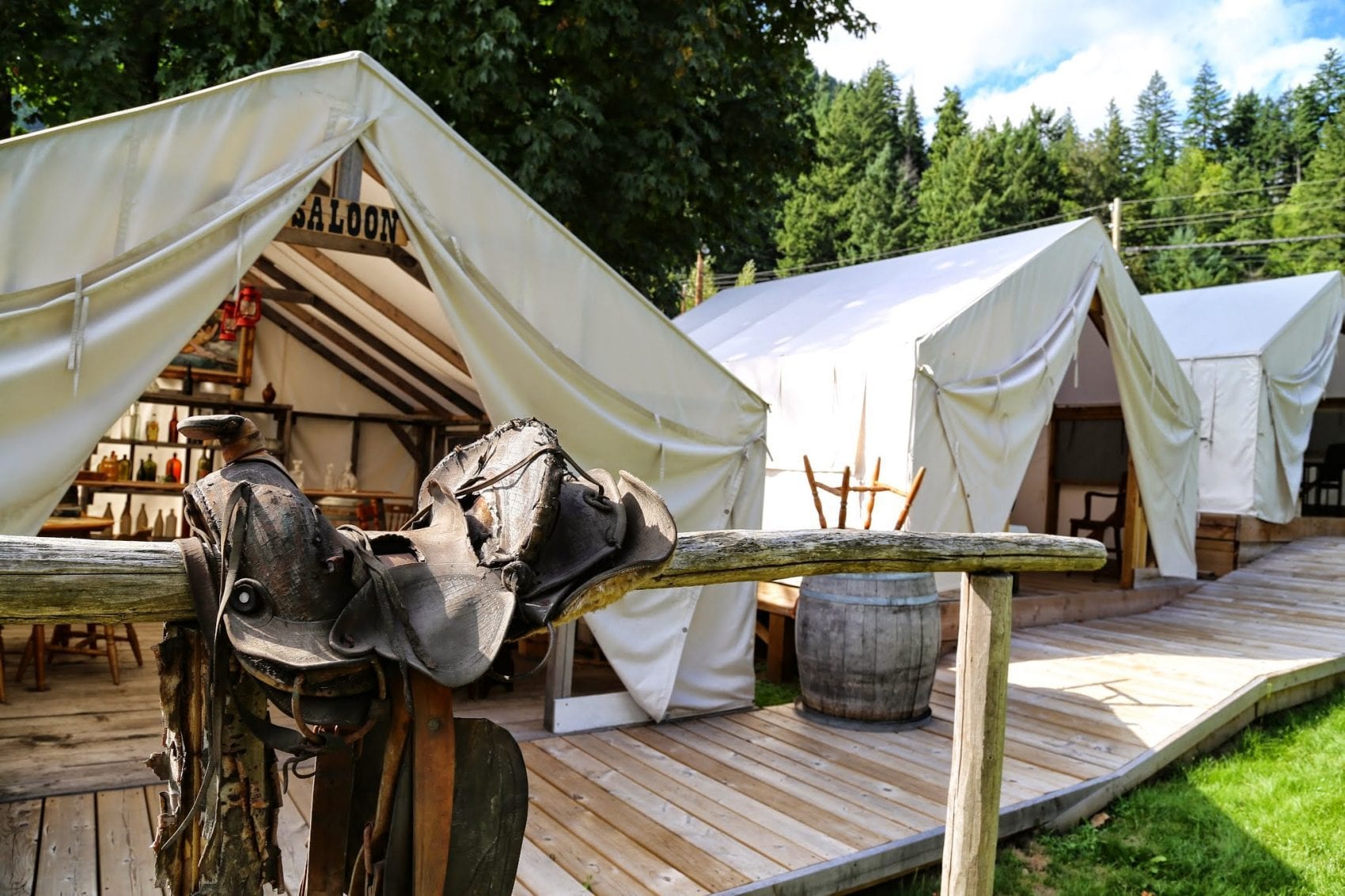 Located on the Fraser River and surrounded by the majestic Rocky Mountains, the town of Yale was designated a British Columbia Heritage Site in 1974. Yale was originally a Hudson’s Bay Company trading post, founded by French Canadian Ovid Allard in 1848. A gold strike ten years later drew thousands of prospectors to the area. The legacy of the British Columbia gold rush is preserved at this unique historic site, featuring a recreated camp showing how the prospectors lived, period buildings and numerous exhibits. Visitors can take part in black-powder shooting and ironwork demonstrations and try their hand at gold panning. Yale was also an important centre during the construction of the first transcontinental railway in North America, built by Canadian Pacific.

Site of three historic events in the founding of British Columbia

In 1848, when Hudson’s Bay Company clerk Ovid Allard founded the Company’s trading post he called Yale, a significant number of French-Canadian and Métis voyageurs worked in the fur trade alongside British traders and explorers. At the time, Francophones accounted for about 65% of the Company’s workforce. When the Fraser River gold rush hit in 1858, the population of this British colony in the West swelled a thousand-fold in a matter of months. Yale suddenly became a boomtown – at its peak, it was the largest city north of San Francisco and west of Chicago. Local gold deposits were rapidly depleted, but within a few years Yale had become a busy river port for the transshipment of supplies to the Cariboo Mountain goldfields. In the 1880s, Yale experienced another boom during the construction of the railway through the Rockies, and also served as the headquarters for the huge project.

Three heritage buildings stand as reminders of this history: St. John the Divine Church, built in 1863, is the oldest church in the province still on its original site; the Creighton House, which dates back to the 1870s; and the Ward House, built in 1880.

The life of the prospectors

The Creighton House museum highlights the gold rush and the railway construction. On display are many artifacts, photos and archives associated with prospecting, transportation and the town’s role as supply depot and shipment point. The Pearson collection of cedar root baskets showcases the remarkable workmanship of women of the local Nlaka’pamux First Nations. These intricate baskets are decorated using imbrication or beading techniques, which involve weaving coloured bark and grasses into the basket as it is being constructed.

A “tent city” with costumed interpreters recreates a prospectors’ camp, complete with general store, saloon and barber’s shop. Displays trace the rise in the number of different trades from 1858 to 1888as a result ofYale’s economic boom. In summer months, visitors can learn the art of gold panning, named for the pan used to scoop up dirt and water from the river, which is then swirled around and poured off, hopefully leaving gold flakes or nuggets at the bottom. A varied menu at the Ward House celebrates the local culinary heritage. “Living History” programming includes story-telling evenings and demonstrations of various trades and skills.

The Anglican church houses a liturgical collection and a period pump organ. Visitors can pull the rope and ring the bell. The nearby Pioneer Cemetery, facing the Fraser River, has headstones dating back to 1862.

Impact of the gold rush on Francophones

The Yale Heritage Site also reflects a radical transformation in British Columbia that began in 1858. Until then, most of the area’s few hundred inhabitants of European origin were French-speaking, and the fur trade was the main economic activity. In the 1850s, the Hudson’s Bay Company started to diversify and gold prospectors (most of Anglo-Saxon descent) arrived by the thousands, accelerating economic change and making the Francophones a minority. Many of the French-speaking Company men also joined the gold rush, while others worked in transportation. One of these was Quebec–born Francis J. Barnard, who in 1862 founded what would long be British Columbia’s main transportation company, starting by delivering mail and then moving goods, gold and people. A plaque commemorates the site of his “Express Office”, on a corner of Front Street in Yale. There can be no doubt that the gold rush helped shape the identity of the town of Yale.