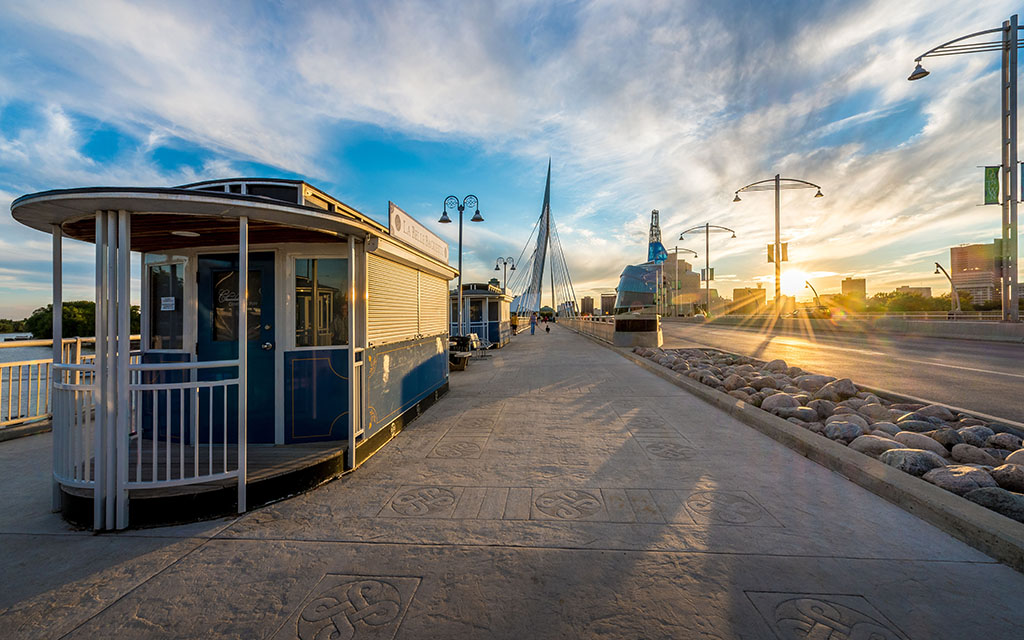 The Esplanade Riel bridge for pedestrians and cyclists spans the Red River, connecting Winnipeg’s French Quarter, Saint-Boniface, with the heart of Manitoba’s capital. One of the most recognized visual symbols in Winnipeg, this elegant construction designed by Franco-Manitoban architect Étienne Gaboury is also designed to bridge the gap between the city’s Francophone and Anglophone communities, who live “on the other side of the river” from each other, as Winnipeggers say. Gaboury also designed the Provencher road bridge, which is paired with the Esplanade Riel. With the same goal in mind, he graced the sides of the bridge with patterns representing the diversity of Winnipeg’s cultural origins (Indigenous, French, British and Métis), interwoven like the threads in a ceinture fléchée (traditional sash). The Esplanade Riel, a side-spar cable-stayed bridge and the only bridge in the world to have a restaurant at its centre where people can meet, dazzles pedestrians and cries out to photographers.

At Esplanade Riel’s grand opening in December 2003, Jim Thomson, Director of Public Works for the City of Winnipeg, said that walking on the pedestrian bridge gave one “the impression of walking in an outdoor cathedral.” Everywhere along the Red River, this amazing white pyramidal structure piques people’s curiosity and draws them like a magnet. Once you reach the bridge, you want to cross it, strolling under the magnificent web of its support cables and taking in the beauty of its unique structure: the large windowed restaurant at its centre, the tall spire, the aerial impact of the cables moving to create a variety of patterns. This bridge is an attraction in itself.

Since 2014, the remarkable architecture of the Canadian Museum for Human Rights next door to the Esplanade Riel on the west bank of the Red River has added to the postcard-like image of the two masterpieces viewed from the east bank. The Esplanade Riel connects the tourist and recreational area of The Forks, The Forks National Historic Site and the Canadian Museum for Human Rights to the west and the French Quarter of Saint-Boniface to the east. Pedestrians can then follow Provencher Boulevard, a cultural and commercial district, or Taché Promenade, which leads to the Saint-Boniface Museum, the oldest building in Manitoba, as well as the Saint-Boniface Cathedral and its cemetery, where Louis Riel is buried.

In the late 1990s, several economic development organizations in Saint-Boniface developed projects to revitalize the French Quarter, which was isolated from Winnipeg’s main residential and commercial sectors. Two of these projects were major: the rehabilitation of the old Provencher road bridge, now obsolete, and the addition of an attractive pedestrian crossing between Saint-Boniface and downtown Winnipeg.

The Franco-Manitoban population demonstrated its vitality and creativity with a landmark project that would be both a symbol of their heritage and a source of pride. Famed architect Étienne Gaboury answered the call and designed a bold and beautiful project unlike any pedestrian bridge ever seen. He worked with Wardrop Engineering to ensure the feasibility of the innovative structure he was proposing, a bridge cable-stayed from a single, transversely inclined pylon. The rehabilitation and widening of the Provencher road bridge were done at the same time. The Provencher road bridge was completed in 2003, a few months before the grand opening of the Esplanade Riel. These projects were part of a series of initiatives aimed at beautifying and revitalizing Winnipeg’s old industrial downtown core located along the Red River, a sector that is now popular among Winnipeggers and tourists alike.

A contest was held in the Franco-Manitoban community to name the pedestrian bridge. Esplanade Riel was the winning suggestion. It was chosen in honour of the great Métis leader Louis Riel, hanged for high treason in 1885, but since recognized as an important political figure and co-founder of the province of Manitoba. Franco-Manitobans took this opportunity to anchor the innovative project in their history and to affirm their Francophone identity. The choice was willingly accepted by the majority English Canadian and multiethnic community of Winnipeg, although with some objections. It is not that easy to erase such long-lasting ethnolinguistic tensions. Nevertheless, in the end, the project largely achieved the objectives set by Étienne Gaboury and the economic development organizations of Saint-Boniface, which were to build bridges between the communities and stimulate the French Quarter’s economy.