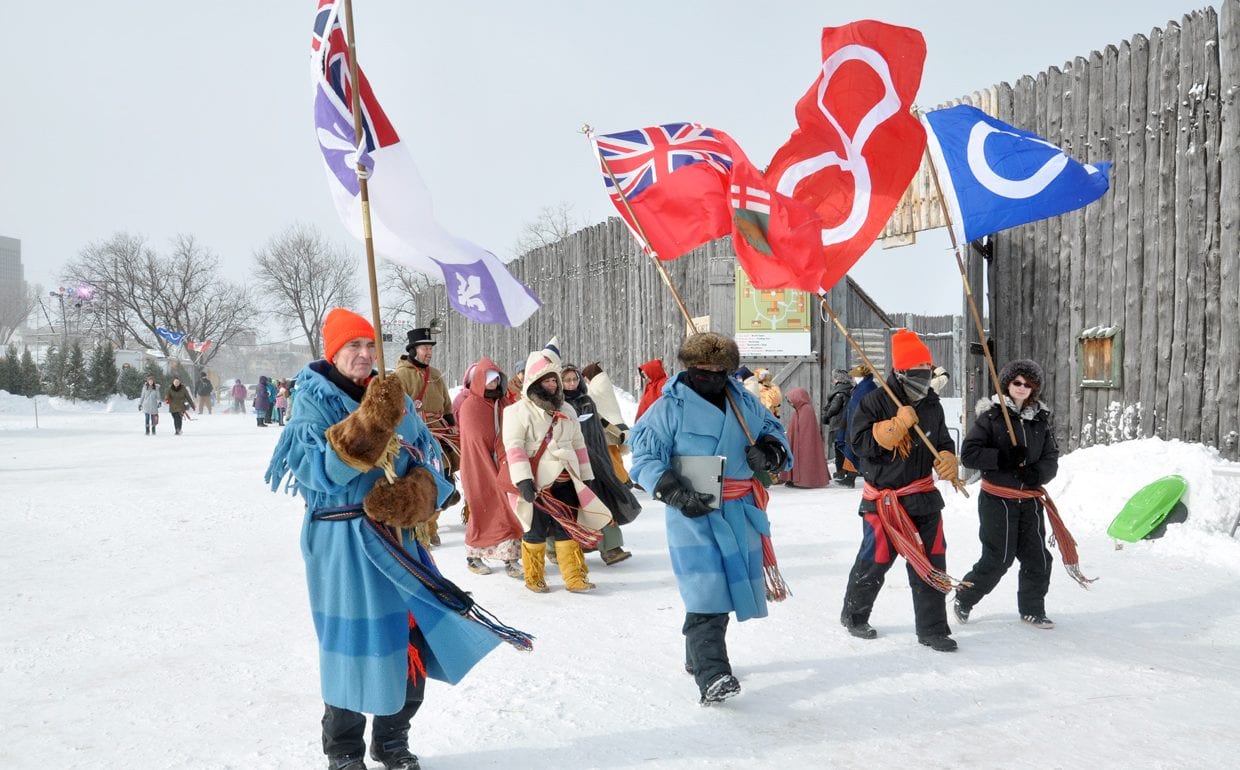 Every February since 1970, the Festival du Voyageur brings some warmth to the cold season in Winnipeg. This major festive event pays homage to the first inhabitants of European origin to settle at the forks of the Red and Assiniboine Rivers, who were French, and the thousands of Francophone voyageurs of the fur trade who followed them. The festival includes music, dance, a snow sculpture contest, a parade, period food, a sugar shack, a bar, a live presentation on the life of the voyageurs, and so on. Thousands of people take part in the uninterrupted activities in Whittier Park, Fort Gibraltar and St. Boniface, over a period of ten days. The joie de vivre of the Francophones and the French language are showcased throughout the Festival du Voyageur.

A festive mood in Winnipeg

Both the origin of the Festival du Voyageur and its varied programming reflect the pride, joie de vivre and the warm welcome typical of Winnipeg’s Francophone community. Like Francophones in the other regions of Canada, Franco-Manitobans love to get together, have fun and encourage their guests to take part in the festivities. The original idea of a Francophone winter festival, first celebrated in 1967, quickly grew, adding the idea of paying homage to the founders of the city of Winnipeg: the voyageurs of the fur trade. Since its first edition in 1970, the Festival du Voyageur has expressed its own original personality and distinguished itself from other winter celebrations through its historic roots and by showcasing the heritage of the voyageurs.

The initiative for the festival came from Georges Forest, a businessman from St. Boniface, originally an independent city that became Winnipeg’s Francophone neighbourhood in 1972. Georges Forest was responsible for promoting the new event. To achieve that, he dressed as a voyageur, with the traditional, tuque, ceinture fléchée, boots and snowshoes. He won over his peers and became the first “official voyageur”, the first ambassador of the festival. This tradition has continued to this day with the choice of a “family of official voyageurs” that embodies the family dimension of the festival, for the family is very important to Franco-Manitobans and their guests.

Over the years, the festival, which initially mobilized the Francophone community of St. Boniface, grew and made its mark throughout the City of Winnipeg as a major event on the winter calendar. As the original organizers wished, the festival has also become an occasion for Franco-Manitobans from other regions of the province to get together and celebrate the fact that they all belong to the broader Francophone community and share French culture. While the theme of the voyageur is certainly historical, it is also very much a reflection of today’s multicultural society, as the fur trade at the beginning of the 19th century brought together Francophones, Anglophones, Métis and Indigenous people. It thus lends itself very well to the multicultural evolution of today’s social fabric, while enabling those who participate in the festival to discover some of the striking aspects of Franco‑Manitoban culture.

Who are the voyageurs?

In 1738, Pierre Gaultier de Varennes et de la Vérendrye, a Canadian, (in other words, a Frenchman born in New France) reached the Red River for the first time and had Fort Maurepas built at the forks of the Red and Assiniboine Rivers, where the many Indigenous peoples of the Prairies had been meeting for centuries. De la Vérendrye was accompanied by a number of other Canadians who were to develop the fur trade in the territories of what are today Manitoba, Saskatchewan, Alberta and the American states of North Dakota, Montana and Wyoming.

After New France was ceded to the United Kingdom in 1763, the British took over control of the fur trading enterprises based in Montreal, in particular the North West Company, the largest of them, for which hundreds of French Canadian and Francophone Métis employees worked. They were habitually referred to as “voyageurs”, that is, individuals who travelled over great distances in birchbark canoes to transport trade goods and furs between Montreal and the territories where Indigenous peoples lived, hunted and prepared furs.

In 1821, when the North West Company merged with its rival, the Hudson’s Bay Company, based in London, it had about 6,000 voyageurs. The majority of them were French Canadians. These are the voyageurs to whom we pay homage at Winnipeg’s Festival du Voyageur. After the two companies merged, the number of voyageurs decreased, because the Hudson’s Bay Company moved its merchandise and furs over a shorter distance (through its posts on Hudson’s Bay) and employed more British people. Nonetheless, many French-Canadian and Métis voyageurs continued to travel over the Prairies to trade in furs, bison hides and pemmican (dried bison meat mixed with fat and small dried fruit), until the bison herds declined around 1875.