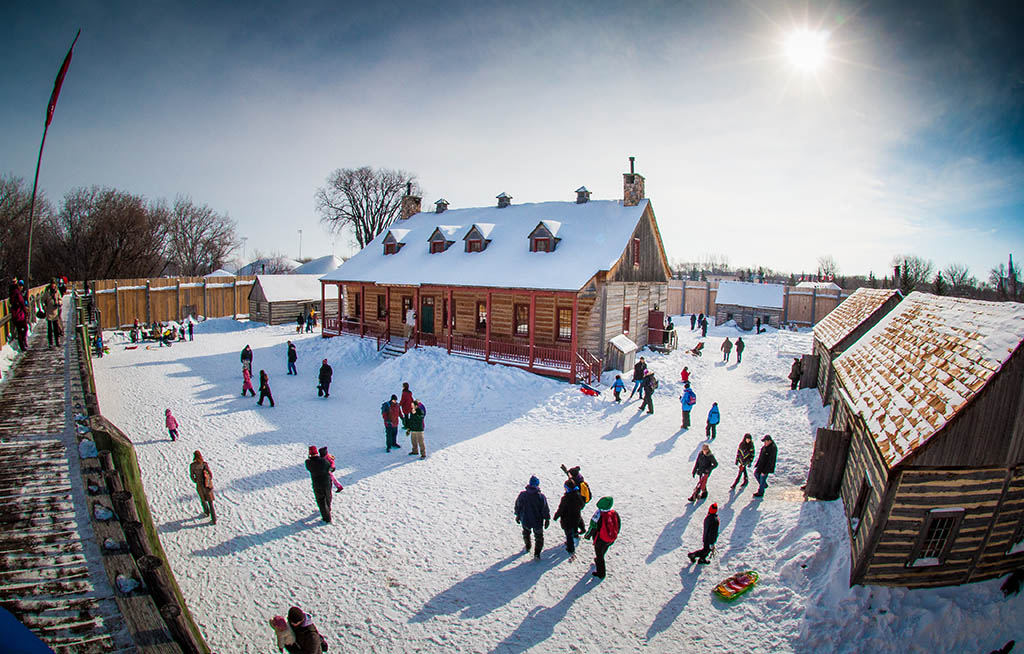 Fort Gibraltar, which today welcomes visitors to Saint-Boniface (Winnipeg) in the summer, is a reconstruction of the real Fort Gibraltar built by the North West Company in 1809 at La Fourche, a strategic area located at the confluence of the Rouge and Assiniboine rivers in Winnipeg. At the time, the objective was to develop the fur industry and control travel on these two major rivers. Today, the purpose of this important tourism site is to make known the lifestyle of the Voyageurs who were the original members of the Franco-Manitoban population and to ensure that visitors experience a fur-trading experience. In the 10 buildings rebuilt according to the techniques of that period, which are located inside a large picket palisade, heritage interpreters wearing costumes of the era personify French-Canadian Voyageurs, Métis spouses, traders and artisans who showcase their know-how, leisure activities and daily work, while providing visitors with information.

Reconstructing the life of the Voyageurs in 1815

The Fort Gibraltar heritage interpreters personify figures of the year 1815. Through their occupations, gestures and comments, they immerse visitors in that period. Using ancient tools, they make furniture and wooden objects in the carpentry workshop, carve iron objects on the anvil and the fire that is kindled by a large manual bellows, decorate clothing with glass pearls the way Métis women did and, in the wintering hut, prepare a meal or play the Voyageurs’ favorite games of strength and skill.

Visitors also find in the trading post a variety of furs acquired from Indigeonous hunters during that era and an amazing variety of staples and diverse items that traders of European gave in exchange. By going around the fort, visitors understand how the network of trading posts, running across the whole of western Canada, was the basis of the North West Company’s (NWC) transcontinental trade. They also understand the workings of the fur trade, a fundamental business in the history of Canada. It was primarily based on the beaver and on goods that the Indigenous Peoples did not own: iron and steel items, fabrics, glass beads, firearms, and certain agricultural products. Fort Gibraltar also highlights the partnership relationships that existed between Indigenous hunters, and French-Canadian Voyageurs, Métis guides and interpreters, and Scottish owners.

The origin of the Franco-Manitoban population

The organization of Le Festival du Voyageur, which plans this yearly festival held in February, is also the one that rebuilt Fort Gibraltar at the end of the 1970s, in order to pay homage to the Voyageurs who were the first inhabitants of European origin to settle in the region that is now Manitoba. These thousands of Voyageurs—the North West Company had over 2,000 employees, most of whom were French-Canadian around 1815—transported in bark canoes furs and goods between Montreal and the vast expanses of Canada’s West and Northwest, a journey that took several months and covered a few thousand kilometers. About half of these Voyageurs only travelled in the West and many settled there. As the NWC authorized “country marriages” between its employees and Indigenous women, that is, according to Indigenous customs, a large number of these Voyageurs built stable families. They are the forerunners of the Métis People who, at the beginning of the 19th century, formed the majority of the Francophone population of Manitoba as it is today. Men and women of religious orders and settlers arriving from Quebec increased the Francophone population from the middle of the 19th century, followed by French, Belgian and Swiss immigrants who increased its diversity toward the end of the 19th century.

Built in 1809 by the NWC on the western shore of the Red River, at the confluence of the Assiniboine River, in Winnipeg’s current downtown area, Fort Gibraltar soon ceased to be an important trading post because beaver quickly became in short supply. Nevertheless, it maintained an essential role as a pemmican warehouse and distribution centre as this traditional Indigenous food became the Voyageurs’ main food source. Pemmican consists of approximately 40% of dried bison meat, crushed into a powder and mixed with 60% of bison fat, to which dried fruit, also reduced to powder, is sometimes added. It has a high nutritional value and can be kept for a long time. Bison hunting and making pemmican remained central to the Métis economy for a long time. Part of Fort Gibraltar’s current interpretation program focuses on these practices.

Fort Gibraltar was also affected by the rivalries between the Francophone community of the NWC and the Anglophone colony that Lord Selkirk, the major shareholder of the Hudson’ Bay Company (HBC), a rival of the NWC, established nearby in 1812. Control of bison hunting and the supply of pemmican, which was at the core of this rivalry, provoked the destruction of Fort Douglas, the Red River colony and Fort Gibraltar. Lastly, when the HBC and the NWC merged in 1821, Fort Gibraltar fell into the hands of the HBC and was renamed Fort Garry.