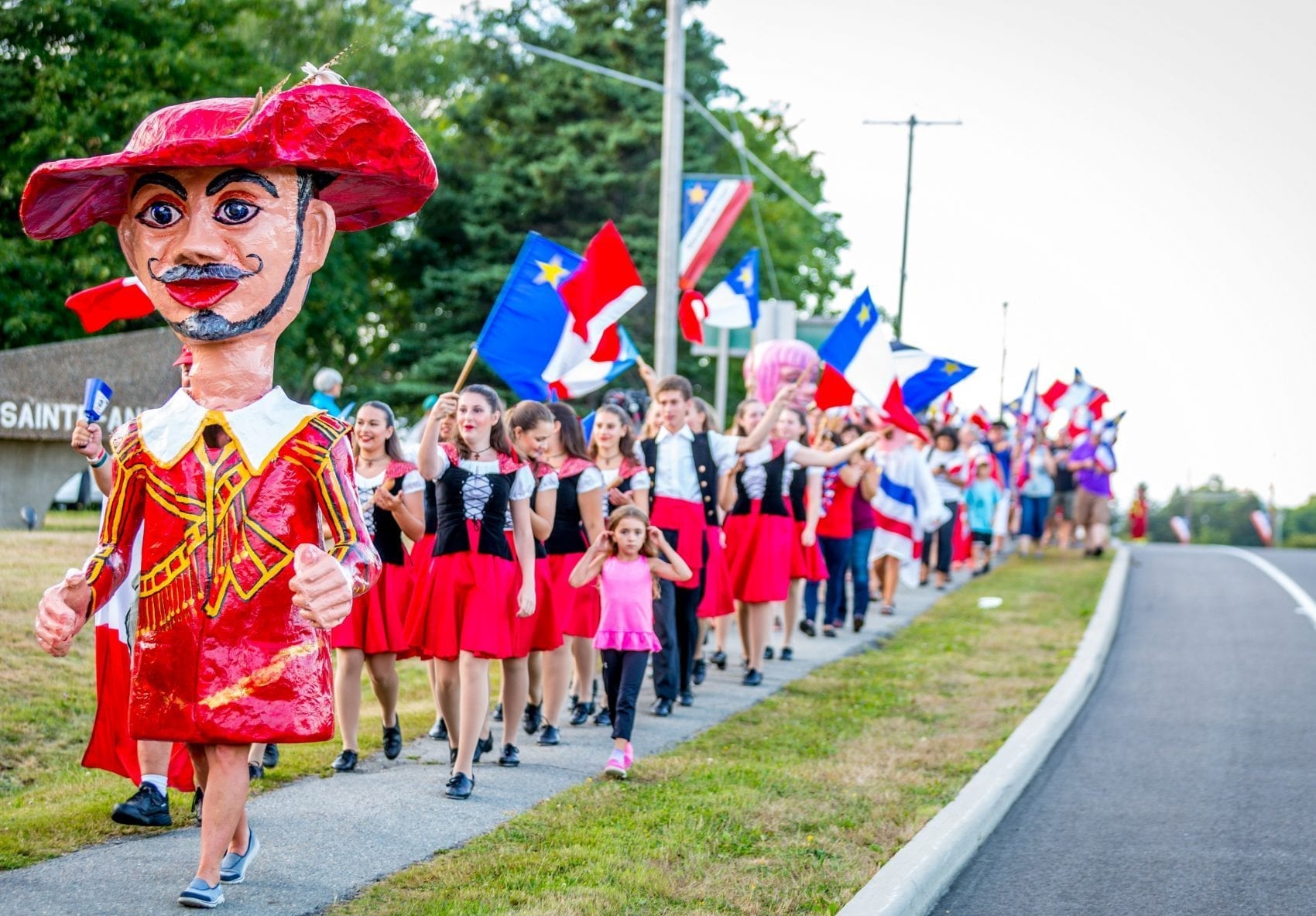 Saint Mary’s Bay is home to the largest French-mother-tongue Acadian community in Nova Scotia, where some 5,000 people have been celebrating their language, heritage and culture since 1955, at the Festival acadien de Clare, the oldest festival of its kind in Acadia. For one week in early August, the villages from St. Bernard to Salmon River welcome thousands of visitors who attend musical performances and parades, dance, sing, sample traditional Acadian dishes and seafood, and meet other Acadians. These celebrations naturally conclude with the Grand Tintamarre on August 15, the National Acadian Day. In addition to the Festival, the region hosts many other activities throughout the summer featuring talented local artists.

Coming together to celebrate their identity

The Festival acadien de Clare is held primarily in a number of villages along a 20-kilometre stretch of Highway 1. A total of six villages take part in the Festival: St. Bernard, Church Point, Saulnierville, Meteghan, Mavillette and Salmon River. This 50-kilometre corridor is home to most of the descendants of the Acadians who settled in the region after the Expulsion. Here they recreated a proud, supportive community that has kept its traditions against the odds while building a future for itself.

The Festival acadien de Clare is an excellent opportunity to become immersed in the cultural pride that unites these Acadians and furthers their development. The event includes a range of activities over the course of one week: the opening parade featuring iconic characters, dinner theatres, musical performances, the bazaar featuring food tastings and arts and crafts kiosks, traditional food competitions, storytelling events, conferences, community picnics, evening dances and activities for children. The Festival closes with the final concert on National Acadian Day, August 15, ushered in by the famous tintamarre. Starting in St. Bernard and Salmon River, participants drive to Church Point to meet at the Église Sainte-Marie, the largest wooden church in North America, then proceed on foot to the Université Sainte-Anne campus where the concert is held.

On their way to the Rendez-vous de la Baie, located on the campus of Université Sainte-Anne, visitors can plan their stay, be it during the Festival or at any other time throughout the summer. Here they will find a visitor information centre, a café, an interpretive centre and museum presenting the Acadian culture of Saint Mary’s Bay, and an art gallery, Le Trécarré, which displays the work of local artists. Other artists show their work in the sacristy of the impressive stone church in St. Bernard. The programming for La Musique de la Baie provides talented local musicians with opportunities to play outdoors or in restaurants in Belliveau’s Cove, Mavillette and Saulnierville. Hiking trails run from the Cape St. Mary’s lighthouse, skirt the sea coast in Belliveau’s Cove or explore the history of Collège Sainte-Anne, which later became Université Sainte-Anne. There are also a number of beaches and nautical activities.

Settling and thriving in Saint Mary’s Bay after the Expulsion

The British deported 11,000 Acadians beginning in 1755. Approximately 1,600 stayed in Acadia, while others escaped to New France (now the province of Quebec). In 1764, the British allowed them to return to Nova Scotia, but not to their former lands. The dispossessed Acadians had to start from scratch. Many chose to settle in Saint Mary’s Bay to start a new life. One third of the 50-odd pioneer families came from Massachusetts, where they had been deported. Others had retreated here and there across Acadia. Half of these families were originally from Port Royal, the birthplace of Acadia, located some 60 kilometres to the east. They were given land in Grosses Coques and Church Point in 1769. Other families they knew came to join them. Many of their children and grandchildren would later settle a bit further west, from Meteghan to Salmon River.

These Acadian pioneers struggled after the Expulsion. Their new lands were not very fertile. They practised subsistence farming, logged the forest, worked as fishers, boat builders, ship builders and merchants. The Eudists from France founded Collège Sainte-Anne in 1890, and stimulated the development of this Francophone community through education and the creation of religious organizations. Their hard work and resourcefulness paid off. By the mid-20th century, thousands of Acadians in Saint Mary’s Bay had overcome their past hardships and began celebrating their success and their ability to reclaim their destiny. They held a joyful celebration to mark the 200th anniversary of the 1755 Expulsion. The following year, they created the Festival acadien de Clare. Through this festive event, the Acadians of Saint Mary’s Bay preserve, enrich and celebrate their Acadian cultural heritage.