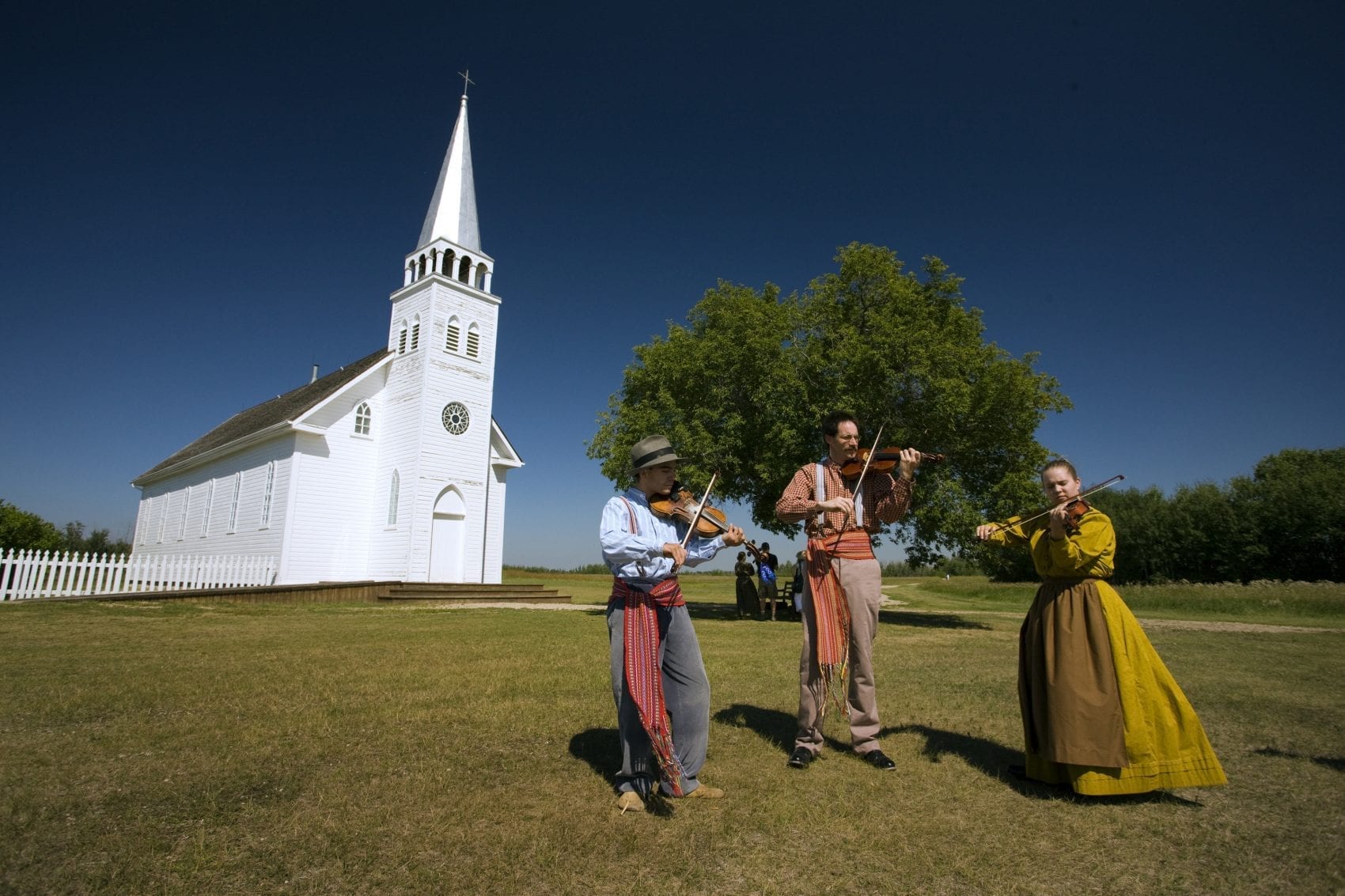 Batoche National Historic Site commemorates a decisive event in the history of the Métis. It was in this fertile region that they tried to make a new life for themselves after being forced to leave Red River (Winnipeg) in the 1870s. Unable to obtain the property rights they were claiming over their new lands, and threatened by famine because of the bison’s disappearance, the Métis rebelled in 1885. The Canadian armed forces, more numerous and better armed than the Métis, defeated them at Batoche on May 12, 1885, despite their courageous resistance. For the Métis, this was the beginning of a long period in the shadows. Batoche now testifies to the new recognition of the Métis people in Canada.

Batoche, laden with memories and symbols

This national historic site comprises the remaining dwellings of the village of Batoche and also a part of the battlefield where the provisional Métis government, led by Louis Riel and Gabriel Dumont, and the Canadian armed forces confronted each other in May 1885. In the rectory—whose walls still bear scars left by bullets from that battle, the church and the house of habitant Jean Caron, a number of exhibits illustrate the lifestyle of the Métis in the late 19th century. Holes used by Métis skirmishers and the reconstitution of the camp occupied by the Canadian soldiers evoke the battle. Visitors are also made aware of the serious problem with the land, which was the main reason for the North-West Rebellion. The Métis had divided these lands in the French manner, in other words, in long strips perpendicular to the South Saskatchewan River, so that each owner would have access to water, whereas the Canadian government wanted to subdivide them in the English way, into square townships, and then transfer them in large lots to English companies.

Today, the Batoche commemorative site and the Back to Batoche Festival, held right beside the site, help to renew interest in the Métis people of Canada and in the recent recognition of their rights. The majority Francophone towns surrounding Batoche perpetuate these French roots.

Who are the Red River Métis?

The Red River Métis were recognized as a distinct people in 1816. These employees and Francophone sympathizers of the Montreal-based North West Company were the product of a long tradition of proximity between voyageurs in the fur trade and Indigenous peoples. This tradition, which originated in the time of New France, continued under the English Regime. The Francophone voyageurs had relationships with Indigenous women and founded families. This gave birth to the Métis people of the Red River, who were naturally related to the Francophones of New France, then to the French Canadians who worked for the North West Company. There were also some Anglophone Métis, often referred to as Half-Breeds, born from relationships between Scottish and English men and Indigenous women.

The Métis hunted bison, like the Indigenous peoples, but also engaged in trade with the white men. They were part of both groups. They had a multiple identity.

In 1821, after the North West Company and Hudson’s Bay Company merged, the Red River Métis obtained the right to remain on and farm the lands they had occupied in that region for generations. But this agreement was only verbal. When the Hudson’s Bay Company sold its territory to Canada in 1870, the Canadian government did not immediately recognize the property rights of the Métis over these lands, and then subjected them to punitive restrictions.

In 1869, the Indian Act established measures designed to assimilate the Indigenous peoples. Some restrictions also affected Francophones, particularly in the area of education. As for the Francophone Métis of the Red River, the Canadian government, after granting them a place in the country in 1870 by incorporating the Province of Manitoba led by Louis Riel, immediately took advantage of a controversial trial (and the execution of a citizen of British origin) to send troops to “normalize” the situation on the Red River. Following violent confrontations, various forms of harassment drove large numbers of the Métis to leave their ancestral lands and seek refuge farther to the west.

Meanwhile, the Americans started to exterminate the herds of bison in order to starve the Sioux, who opposed the colonization of their ancestral lands by American settlers. This initiative obviously had repercussions in Canada, because bison roamed the North American prairies without any regard for borders. The way of life of the Métis and of many Indigenous people in Canada was threatened by these developments.

A new way of life in the Batoche region

Around Batoche, in the 1880s, the Métis who had left the Red River resolutely turned to farming to make a living. They built dwellings and a church, tilled and sowed the soil, and asked the government to officially recognize their property rights over these new lands, so that they would not lose them again. They also asked for food aid to escape famine while waiting for their land to produce good yields. Since the government did not meet their demands, the Métis, whose resources and patience had run out, decided to resort to force.

In response to the Métis uprising, a large number of well-equipped troops were sent to Batoche, thanks to the railway line that had just been built. The Canadian armed forces easily put down the rebellion, which had been joined by some groups of Indigenous people. The victory of the Canadian armed forces marked the end of the Métis way of life and the recognition of this people in Canada for a century. The principal leader of the Métis, Louis Riel, was hanged on November 16, 1885, for high treason. Batoche recalls this sad aspect of our historical heritage.

Today, various legal steps taken before the courts have clarified the rights of the Métis, who have been recognized by the Canadian Constitution of 1982.