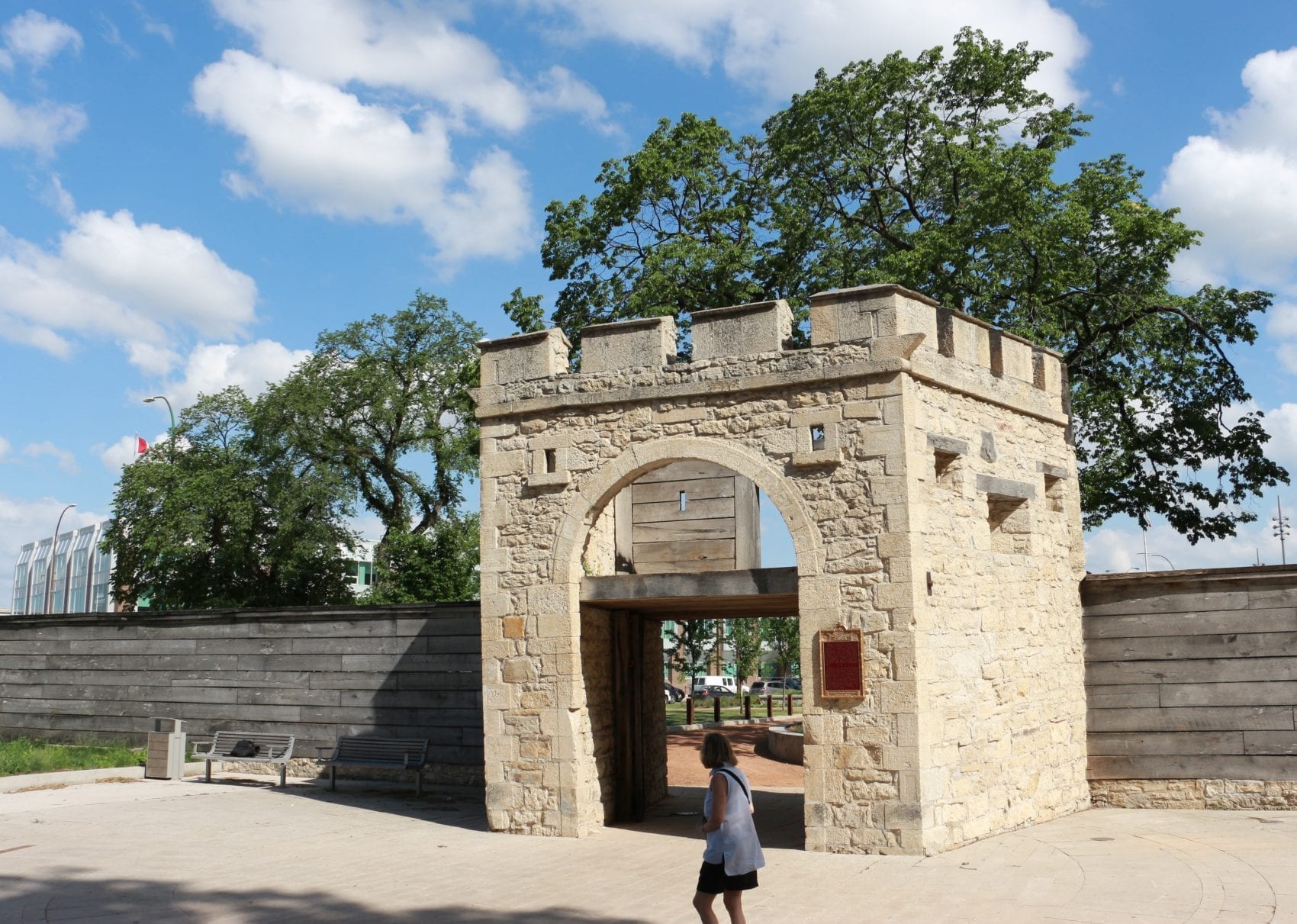 The significance of Upper Fort Garry Provincial Heritage Park was fading into oblivion when it gained an impressive new lease on life in the early 2000s. Long in ruins, Fort Garry had once played a key role in the development of the province of Manitoba and Western Canada, which is what this park, opened in 2014, was designed to commemorate, while offering passers-by an oasis of calm. Stone walls soberly mark the contours of the ancient buildings, and a long steel wall illustrating episodes in Manitoba’s thousand-year history stands at the exact location of one of the ancient boundary walls. Thousands of LEDs in the wall create video-like images evoking a Métis buffalo hunt. A georeferenced mobile app and a website provide a wealth of information about the buildings, events and people that marked this site in Winnipeg’s downtown core.

There was nothing left of the imposing Upper Fort Garry, half built of stone in the mid-19th century, but the governor’s gate on the north side. The new design obviously preserved this authentic element dating back to 1853, one of the oldest in Winnipeg, but everything else is new.

A distracted passer-by might not notice anything special about the park, since most of the information available is online. It can be consulted on a tablet, smart phone or computer. During the day, visitors admiring the engravings on the heritage wall, a tall steel structure measuring 130 metres in length along the west side of the park, might not notice the light and sound show that animates it. But anyone who sees the light show creating movement or, better yet, who waits for dark, will truly enjoy this innovative work of art.

If you download the mobile app or consult the website, you can learn about the history of Upper Fort Garry and its role in the history of Canada by exploring the interactive map and the hundreds of images, texts and videos. The georeferenced mobile app displays the appropriate information as you move around the park.

The story of a revival

In 1890, the Hudson’s Bay Company (HBC), which built and occupied the fort, left the remaining gate and the unoccupied land around it to the City of Winnipeg to be used in perpetuity as a park. By the early 2000s, however, the significance of Upper Fort Garry for the economic, political and cultural development of Western Canada, Manitoba and Winnipeg had largely been forgotten. In 2004, the City, which considered the gate and its surroundings “surplus property,” invited citizens to suggest ways of using the land. That sparked the creation of the non-profit group The Friends of Upper Fort Garry, which suggested preserving the park and making it a place where history comes alive, and eventually adding an interpretation centre.

In 2008, the emergency public fundraiser aimed at stopping construction of a building on the site raised $10 million in less than four months! This ensured the creation of the historic park, commemorating, among other things, the fact that the Francophone population, comprising Métis and French Canadians, made up the majority in the Winnipeg region in the 19th century—which is why all of the information is available in both French and English.

The HBC built Upper Fort Garry after the first Fort Garry was severely damaged by flood waters in 1826. The new fort was located on high ground to protect it from flooding from the Red River, and was surrounded by a stone rather than wooden boundary wall. This imposing structure unlike anything else in the Prairies protected the fort and, at the same time, demonstrated the extent of the HBC’s power. Upper Fort Garry, which doubled in size in the next 20 years, was both an important commercial trade centre and the centre of legislative, administrative and judiciary power in the Red River Colony, whose population lived around present-day Winnipeg. This power also extended to the immense territory owned by the HBC covering one third of present-day Canada and part of the United States, although, at the time, Aboriginal and Métis traditions still dominated in most of the territory.

Two events at Upper Fort Garry impacted the Métis. In 1849, Louis Riel Sr., leading a company of 100 armed Métis, surrounded the fort during the trial of Guillaume Sayer, a Métis merchant accused of violating the HBC monopoly. Riel’s group took advantage of Sayer’s acquittal to proclaim freedom of trade for all, a decisive stage in the development of the Métis communities. Twenty years later, in 1869, around 40 Métis led by Louis Riel took the fort. Riel took official possession of the fort and, in January 1870, wrote the List of Rights of the people of Red River. A provisional government, inspired by the large buffalo hunts involving hundreds of people, and led by Louis Riel, was established at Upper Fort Garry. When Canadian Prime Minister John A. Macdonald recognized the legitimacy of the government, three delegates left for Ottawa to negotiate Manitoba’s entry into Confederation in July 1870. All of this information, and much more, is available online and in Upper Fort Garry Heritage Provincial Park’s mobile app.