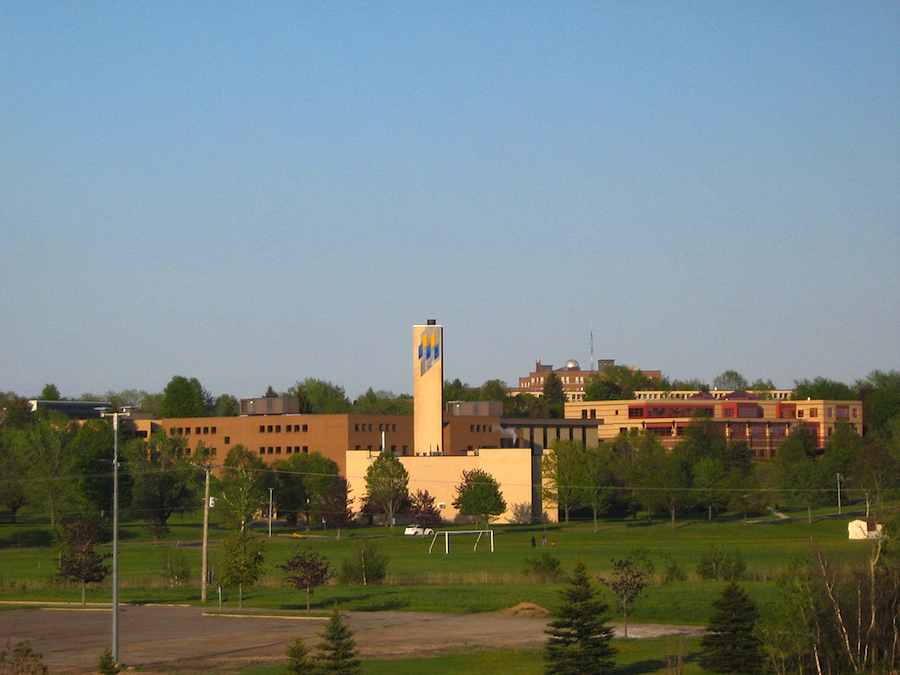 The University of Moncton is not only the largest Francophone university in Canada outside Quebec, but also a thriving Francophone community that benefits the entire Acadian community. It welcomes around 6,000 students a year on its three campuses, in Moncton, Shippagan and Edmundston. Four hundred professors teach in eight different faculties that offer a total 180 programs. French-language theatrical, cinematographic and musical events, which are open to the general public, are scheduled on a regular basis. The Moncton campus is also home to three major public institutions: the Acadian Museum, the Centre d’études acadiennes Anselme-Chiasson and the Galerie d’art Louise-et-Reuben-Cohen. The other campuses also contribute in their own way to sociocultural life in their communities.

A university for the entire community

The University of Moncton (UofM) plays such an important role in the development and vitality of New Brunswick Acadians that the community keeps a close eye on the institution’s development and activities. The local population is proud of and benefits from the concentration of French-language cultural activities organized by the UofM’s facilities, not to mention its human and financial resources, which are indispensable to the accomplishment of its educational mission. UofM student and sociocultural services reflect the institution’s dual mission of enhancing academic and community life.

Although the Moncton campus holds the most cultural activities, a smaller number are held on the Edmundston and Shippagan campuses. The following sites and organizations are dedicated to them: a) the Acadian Museum of the UofM, the largest Acadian museum in Canada, which presents exhibits on Acadian history, society and culture; b) the Centre d’études acadiennes Anselme-Chiasson, which has the largest documentary collection on Acadia, including a general library that has an exceptional number of works, textual, photographic, cartographic and audiovisual archives, not to mention ethnological and folklore archives, and which also makes many genealogical research tools available to the public; and c) the Galerie d’art Louise-et-Reuben-Cohen, which exhibits contemporary art works of Acadian and international artists, as well as that of UofM graduates. Across from the Moncton campus, visitors can find the Millennium Ecological Park, with pedestrian trails embellished with works of art.

The creation of the University of Moncton in 1963 stemmed from a general movement of awakening and emancipation among the New Brunswick Acadians. However, the UofM was also to be an essential driving force, since this institute of higher education was to multiply the fields of specialisation and provide further training to Acadian professionals, in more sectors than ever before. The reconfiguration of the UofM in 1972 gave concrete form to the expansion of its mission. Programs of studies were then offered in administration, law, engineering, pure science, education sciences, health sciences and community services, as well as the arts and social sciences. The university also preserved a particular sensitivity towards the study of Acadian history and culture, a focus that would contribute to extending the influence of Acadia in Canada and on the international scene, and would stimulate the vitality of the Acadian community.

The UofM is undeniably a key factor in promoting the health and prosperity of contemporary Acadian culture and society.

Looking at the origins of the University of Moncton

Although the UofM is the largest Francophone university in Atlantic Canada, it is not the first in New Brunswick. It inherited classical colleges for boys and girls founded by the religious congregations in various regions of the province. It is intimately connected with Collège Saint-Joseph, which opened at Memramcook in 1864 and became a university in 1888, since the latter directly bequeathed its role and university status to the UofM in 1963. The new institution also inherited Notre-Dame d’Acadie of Moncton, a women’s college that closed down in 1965.

On the Acadian Peninsula, Collège de Bathurst became affiliated with the UofM in 1963 but closed down in 1975 to leave room for the UofM campus at Shippagan, opened in 1977 in a former women’s college founded by the religious order of Sainte-Marie in 1959. As for the UofM campus in Edmundston, its origins go back to Collège Saint-Louis, founded in 1946 and elevated to the rank of university the following year. The Saint-Louis-Maillet women’s college in Edmundston merged with University Saint-Louis in 1972.

The University of Moncton is thus the culmination of many efforts made to enhance French‑language higher education for New Brunswick Acadians.