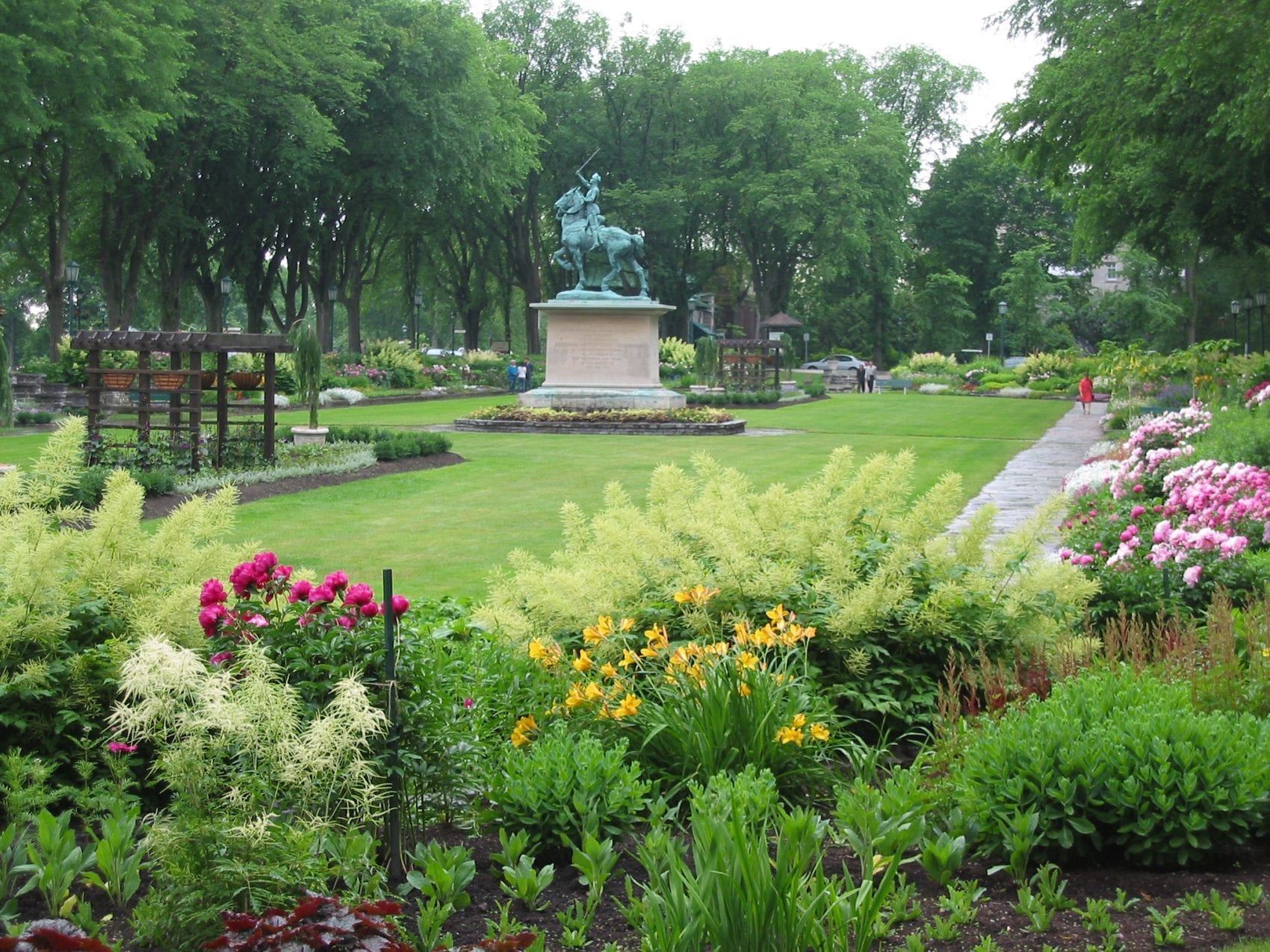 The Plains of Abraham are an expansive park overlooking the St. Lawrence River in downtown Quebec City. Millions of people visit it year-round. This historic site was the theatre of a defining battle in North American history: the Battle of the Plains of Abraham, where the British defeated the French in 1759, ensuring the conquest of New France. The Plains of Abraham Museum commemorates this event through a major exhibition re‑creating the battle through a captivating, immersive projection and a collection of original artefacts and reproductions that visitors are free to handle. The Plains of Abraham host world-class musical performances in an extraordinary natural amphitheatre. Visitors are also drawn to the spectacular flowerbeds of Joan of Arc Garden, an enchanting variety of landscapes, intimate performances at Edwin‑Bélanger Bandstand and the Musée national des beaux‑arts du Québec. The Plains are also enjoyed by many sports and recreation enthusiasts. In the City of Quebec, the Plains of Abraham are not to be missed.

Besides the Plains of Abraham being the site of the most well-known event in the province’s history—the decisive battle of September 13, 1759, between British forces led by General Wolfe and French forces led by General Montcalm, which ended in the capture of the City of Quebec—Battlefields Park is also a fantastic recreational area for all.

If you love nature, you will be drawn to the Plains’ abundance of dense old-growth forests, expansive grassy areas, flowerbeds—including the splendid Joan of Arc Garden—fountains, and spectacular lookouts. Are sports and recreation more your style? In winter, you can find dozens of kilometres of cross-country ski trails, a skating rink, tobogganing hills and plenty of snow for snowshoeing. In summer, people are regularly seen playing soccer and football, in-line skating on the designated rink, jogging, biking and playing a variety of pick-up games with friends. Are you a patron of the arts? In 1933, the first pavilion of the Musée national des beaux-arts du Québec was built here. In 1990, a former prison was converted into Charles Baillairgé Pavilion. And most recently, the exhibition space was expanded considerably with the addition of the Pierre Lassonde Pavilion. If the performing arts are more your style, you will be delighted to know that the Plains have long hosted major concerts, particularly for occasions such as Quebec’s national holiday, Saint‑Jean‑Baptiste Day. The Plains’ reputation as an ideal natural amphitheatre was solidified in the late 1990s, when the Festival d’été de Québec set up its main stage near the Citadelle, on a site that can easily and safely hold more than 100,000 people. There is also the Edwin‑Bélanger Bandstand, which offers smaller-scale shows free of charge in another section of the Plains.

If you prefer history and heritage, the Plains of Abraham are a gold mine!

The Plains of Abraham Museum has a variety of permanent and temporary exhibits. The Battles 1759 ‑ 1760 exhibit tells the story of the battles of the Plains of Abraham and Sainte-Foy. The Identities and Traces exhibits both present artefacts from the Park’s archaeological collection. These remains were discovered during various archaeological digs carried out on the Plains. The Museum also serves as the starting point for guided tours of the Park. Throughout the Plains, a number of interpretation panels, historical plaques and monuments provide information about what went on during the famous battle and how the Park was developed, starting in 1908. The recent Plains of Abraham Trail linking Battlefields Park to the Promenade Samuel‑de‑Champlain, at the base of the cape that British soldiers scaled on the night of September 12–13, 1759, also features some highly informative interpretation panels.

The Musée national des beaux-arts du Québec’s Charles Baillairgé Pavilion has been classified as a heritage building since 1997. The two original Martello towers are rare, round-shaped military structures, one of which is open to visitors. Lastly, overlooking one end of the Park is the Citadelle of Québec, located on the Old Québec heritage site.

The name “Plains of Abraham” refers to Abraham Martin, a navigator who settled in New France in 1620. From 1635 to 1667, he owned part of the land that makes up the modern-day Plains of Abraham, where he grazed his cattle. The term “Heights of Abraham” was undoubtedly in use from that time, but it was not until 1759 that it appeared in documents penned by New France’s Chevalier de Lévis and by the British conquerors.

In the era of New France, this vast rolling terrain located outside fortress walls had no buildings on it. After the British conquest, the military acquired the land and kept it clear to better defend the city. When the British garrison left Quebec City in 1871, several developers were interested in this highly valuable land overlooking the river, but the plan for a commemorative park won out. In 1901, the Government of Canada purchased the first section of the current park. Then, in 1908, for the tricentennial of the founding of Quebec City, it established the National Battlefields Commission to organize the 300th anniversary celebrations and to create Battlefields Park.

Montreal landscape architect Frederick G. Todd drew up plans in the English picturesque style. Landscaping and planting work began in 1912, but the entire park’s development would span several decades, with the final phase taking place in the 1950s. Today, Battlefields Park reflects every aspect of Todd’s design in terms of dimensions and overall layout—to the enjoyment of millions of visitors and residents!