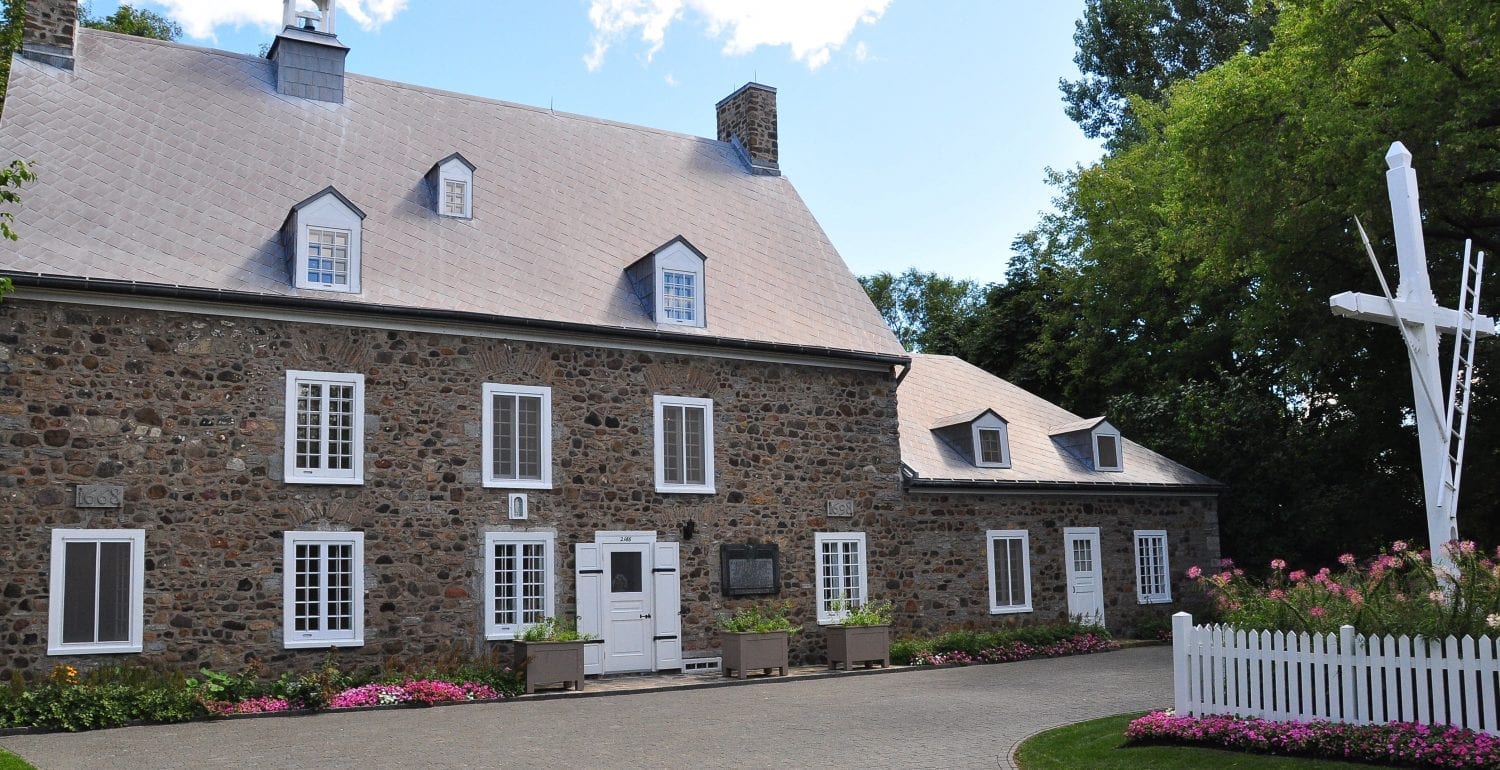 In 1668, Marguerite Bourgeoys acquired the Maison Saint-Gabriel and the land around it to feed the sisters of the Congrégation de Notre-Dame which she had founded nine years earlier. Recognized today as one of the finest examples of traditional rural architecture in Quebec, the house became the centre of a model sharecrop farm that the sisters would manage for three centuries. In 1966, they transformed the house into a museum to pay homage to the members of the congregation and to the Filles du roi who were lodged and educated there between 1668 and 1673. Since then, a wide range of heritage and historical interpretation activities have enhanced the exceptional value of the house, officially declared a historic site by Quebec’s Ministère de la Culture et des Communications and designated a National Historic Site by the Government of Canada, and of the hundreds of artifacts exhibited there. The extraordinary vitality of Maison Saint-Gabriel, one of the oldest historic sites on the island of Montreal, has earned it numerous awards and distinctions.

The young interpretive guides who give tours of the Maison Saint-Gabriel enthusiastically transmit knowledge and memories handed down over three centuries of uninterrupted occupation. Whether it involves the 17th-century stone sink, Marguerite Bourgeoys’ writing desk, the kitchen utensils or the holy pictures before which the sisters meditated, the knowledge transmitted from generation to generation is kept alive. The guides draw visitors’ attention to the vestiges of the 1693 fire, the usefulness of an object no one today could identify and the different materials used when the house was extended in 1826.

In an hour’s time, from the cellar to the attic, through the furniture, costumes, devotional objects, works of art and tools from different periods, visitors learn about the evolution of the lifestyle of these active and ingenious women between the 17th and 20th centuries. They also gain an appreciation of the extent of their skills and the magnitude of the tasks they performed on this sizeable farm with the assistance of their employees. As surprising as it may seem, although it is located in the heart of Montreal, the site has a rural cachet with its large centuries-old trees and gardens.

In the same spirit, dinners and musicales make learning history even more fun. The meals served in the refectory located in the reception pavilion are also facilitated by an interpretive guide. The Maison Saint-Gabriel has even set up special acitivities to strengthen ties between the house and the community, such as the bread run, in which the breadman goes from door to door along a dozen or so streets in an old-fashioned horse cart (of course, the horse is a Canadian breed) to sell bread baked in the traditional manner. The beekeeping workshop and the Bee a Friend campaign support the local production of Miel de la Métairie, made from the nectar of flowers found on site and sold locally. The vegetable patch, very similar to those popular in New France, contains the most common vegetables of the time, as well as aromatic, fragrant and medicinal plants found in the farmhouse garden in the 18th century. The Jardin des Origines recalls the contribution of Aboriginal women to the body of horticultural and medicinal knowledge, and testifies to the meeting of the French and Aboriginal cultures in New France.

The Congrégation de Notre-Dame played a key role in the education of young women in Quebec. After Marguerite Bourgeoys opened her first school in Montreal in 1658, the congregation opened dozens of schools and convents to teach young women around the province until the 1960s. The congregation was also present in other provinces, the United States and Japan.

By acquiring the house built by Jacques Le Ber in the early 1660s and the land surrounding it, Marguerite Bourgeoys added to the land Maisonneuve had granted her in 1662. The large plot of land was cleared and cultivated to feed the members of the congregation and their student boarders. From 1668 to 1673, the sisters housed Montreal’s Filles du roi. These French immigrants played a key role in the development of New France by marrying settlers and having families. The vast majority of them adapted well to their new country, in particular thanks to the education they received from the sisters of the Congrégation de Notre-Dame, which included a large practical component.

A document from 1684 reported that the smallholding was very productive. The sisters grew wheat, rye, barley, oats, buckwheat, peas, hemp, flax and a wide variety of vegetables and herbs, and raised livestock. In 1693, a fire destroyed much of the house, which was rebuilt on the same foundation in 1698. The farm continued to grow throughout the 18th century. The house itself was extended in 1824. At the time, in addition to fresh produce, the sisters put up to 40,000 jars of preserves a year. In the second half of the 19th century, the construction of the Lachine canal led to a wave of industrialization and rapid demographic growth in the area. The farm ceased operations in 1960. The museum opened in 1966. In 2007, the Historic Sites and Monuments Board of Canada designated the Maison Saint-Gabriel a National Historic Site.