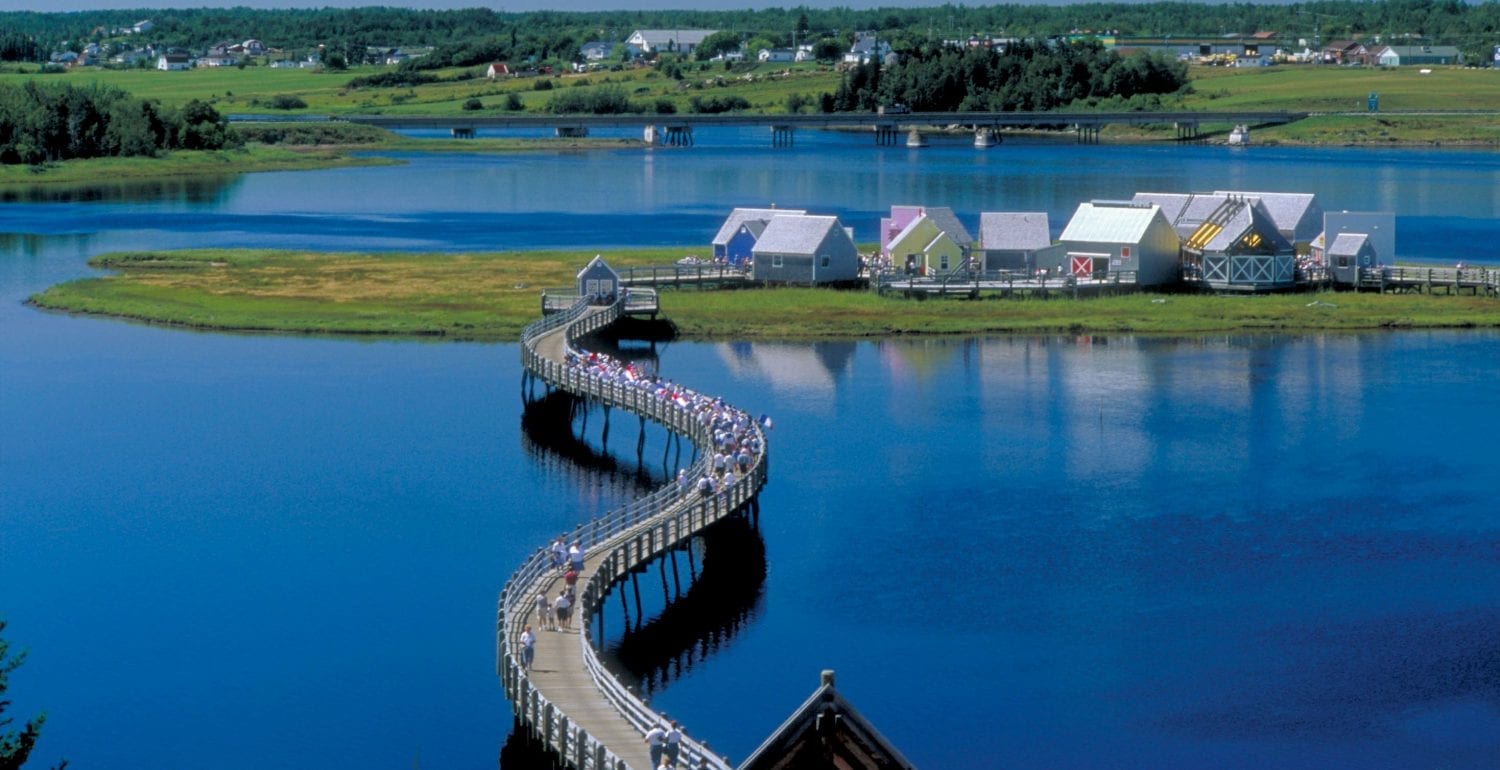 On Île-aux-Puces, at Bouctouche, the stories of author Antonine Maillet will transport you to the traditional Acadia that she recreated around her most famous character, La Sagouine. Professional musicians and actors lead visitors on a voyage between the realm of imagination and the real world, between laughter and emotion, in the artist’s truculent and delightful universe. In addition to this colourful Acadia of Île-aux-Puces, the Pays de la Sagouine offers contemporary Acadian musical performances, dinner theatre, brunches and special events in its large modern hall. Through the diversity of its productions, the Pays de la Sagouine stands out as a major feature of Acadia’s theatrical arts.

Antonine Maillet wrote a play for the character La Sagouine in 1971. The only actor who has ever acted the part, Viola Léger, has performed the play on stage over 2,000 times. La Sagouine was such a big hit that it propelled its author and its actor to stardom, and spread far and wide a specific image of Acadia that is close to its historical roots.

The play depicts a poor 72-year-old cleaning lady who, with humour and wisdom, tells the story of her difficult life, in the traditional and colourful Acadian language. In 1979, Antonine Maillet won the prestigious Prix Goncourt for her novel Pélagie-la-Charrette, which takes place a few years after the Deportation of the Acadians in 1755.

Since the Pays de la Sagouine opened in 1992, in the village where Antonine Maillet was born, the writer has written plays only for this site. She develops the characters that La Sagouine speaks about in the original play, and draws on her work to add new characters. For some years now, young authors have been helping her by remaining faithful to the universe she created and the language she employs.

The original intent of Le Pays de la Sagouine was to stage plays and develop an original tourist attraction, which so far more than a million and a half people have visited.

A site under development

In addition to the traditional music and theatrical productions presented on Île-aux-Puces, which are renewed every year, plays written by Antonine Maillet and other Canadian authors are presented in the form of dinner theatre in the great hall of the Ordre du bon temps, the restaurant at the entrance to the site. Unlike Île-aux-Puces, which is open for 71 consecutive days during the heart of the summer, the hall and restaurant are open from early summer to Christmas. Five to seven musicals, comedy shows and special events are also presented there.

For some years now, the Pays de la Sagouine has been offering a one-week theatre camp to children aged 8 to 15. They act out Antonine Maillet’s plays, write new skits, don costumes and produce their shows on the Île-aux-Puces stage at the end of their week of training. This initiative helps to keep alive the Acadian language tradition so dear to Antonine Maillet.

Appropriation of the Pays de la Sagouine by the community, and vice versa

On National Acadian Day, celebrated on August 15 each year, the second largest tintamarre of Acadia—a parade that noisily celebrates Acadian pride—takes place in Bouctouche. It concludes with a major celebration on Île-aux-Puces, testifying to the appropriation of the Pays de la Sagouine by local residents. Many locals also attend various other shows and special events during the season.

The Pays de la Sagouine makes a significant contribution to the development of French-language dramatic art in New Brunswick, by providing work for many professional actors for many months out of the year. The Pays de la Sagouine also enables drama students at the University of Moncton to have their first work experience, whether as actors, set designers or playwrights. Through its various activities and popularity, the Pays de la Sagouine perpetuates a tradition of excellence in Acadian theatre thanks to the most popular Acadian play, La Sagouine by Antonine Maillet.