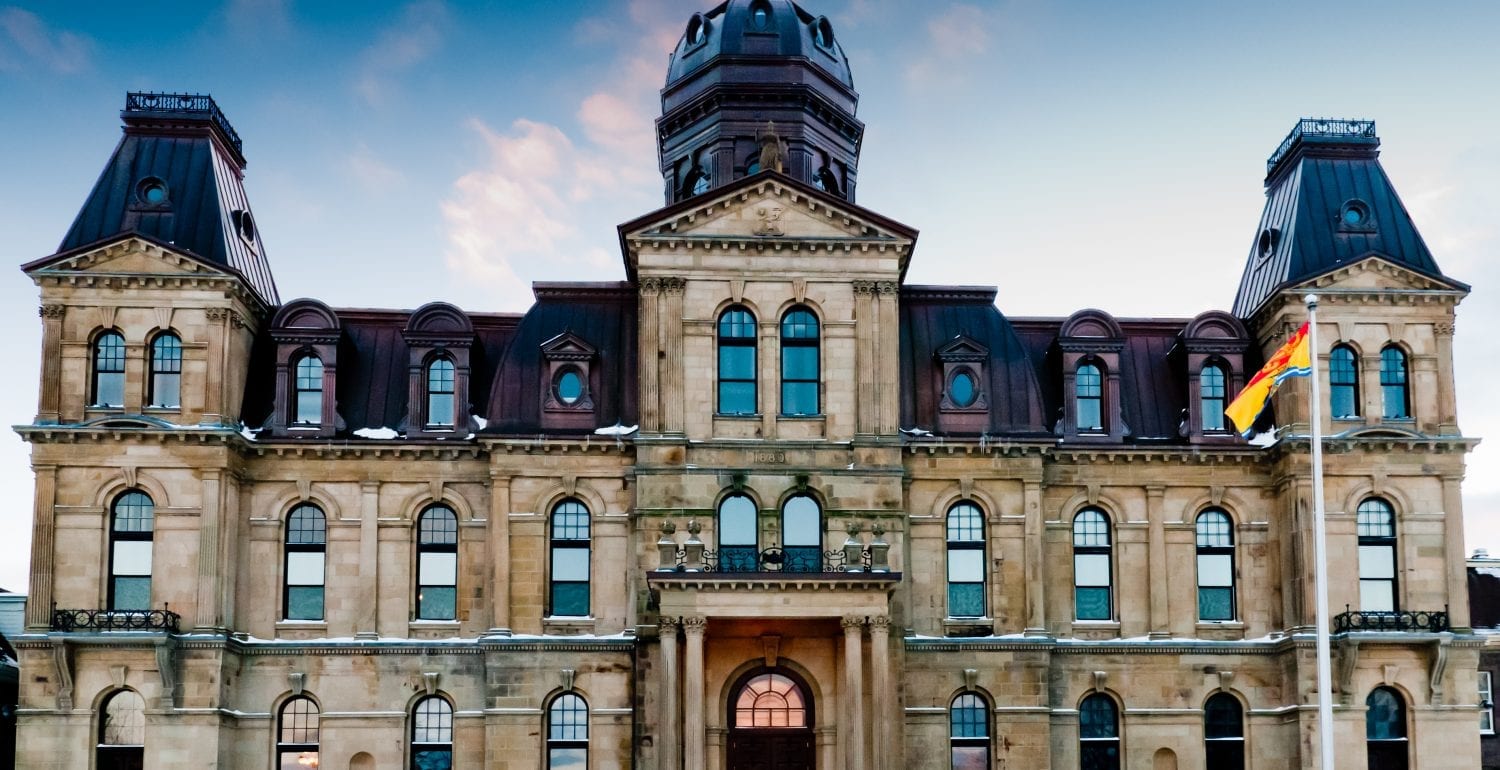 New Brunswick is Canada’s only officially bilingual province, and has been since Acadian premier Louis J. Robichaud enacted the New Brunswick Official Languages Act in 1969. From 1960 to 1970, this leading politician greatly enhanced the standard of living of Acadians by improving education and increasing their inclusion in all aspects of society. Robichaud’s successor, anglophone premier Richard Hatfield, continued in the same vein, also helping to give Acadians more power in the provincial parliament in Fredericton. But it was a long road, beginning with the election of the first Acadian MLA in 1846. Visitors can observe New Brunswick’s parliamentary debates and tour the Legislative Assembly Building, built in 1882 in the Second Empire style and designated a protected historic site and a provincial heritage place.

New Brunswick politics and the Acadians

After the Acadians returned to settle in what is now New Brunswick, following the Deportation of 1755, they would have to wait two hundred long years before they acquired any political power they could use to improve their lot. It was not until 1810 that they secured the right to vote, and 1846 that they got their first MLA elected. Even once the number of Acadians in the Legislative Assembly had swelled, after the creation of Canada in 1867, party lines did nothing to further Acadian interests. Acadian development was of little consequence to the anglophone majority wielding the political and economic power, even though Acadians accounted for one-third of the province’s population.

In 1960, with a progressive mood prevailing in Canada, Louis J. Robichaud, leader of the provincial Liberal party since 1958, was elected premier of New Brunswick on a platform calling for better socioeconomic conditions for Acadians and the centralization of power in Fredericton. Responsible notably for the New Brunswick Official Languages Act and the creation of the Université de Moncton, Robichaud and other Acadian politicians in his government ushered in the first significant improvements in the living conditions of the Acadians. Measures subsequently taken by premier Hatfield resulted in the creation of numerous Acadian institutions active on the political and social scenes and the founding of the Parti Acadien, which defended Acadian interests between 1972 and 1982 even though none of its members were ever elected to the Legislative Assembly. All of these initiatives served to advance the socioeconomic emancipation of New Brunswick’s Acadians. Ever since, Acadian politicians have maintained a strong presence and voice.

The French language is one of the fundamental characteristics of the Acadian culture. As a result, the adoption of the first Official Languages Act in 1969, making New Brunswick Canada’s only officially bilingual province, counts as a true milestone in the political history of the Acadians and the preservation of their cultural heritage.

The federal Official Languages Act, adopted in 1968, served as a model for New Brunswick’s Act, the main difference being that the latter applied only to the services of the provincial government. In 1981, under the Hatfield government, the Legislative Assembly went quite a bit further, adopting Bill 88, or the Act Recognizing the Equality of the Two Official Linguistic Communities in New Brunswick. This Act affirmed the equality of status and equal rights and privileges of the two linguistic communities, and included the creation of separate institutions for cultural, educational and social activities. It also required the provincial government to protect and promote this equal status. The following year, Hatfield had certain Bill 88 language rights entrenched in the Canadian Charter of Rights and Freedoms, which formed part of the new Constitution. In 1993, all the provisions of the Act were entrenched in the Charter.

New Brunswick’s first official languages policy was presented in 1988, and was followed by lengthy reports on its implementation. In 2001, the New Brunswick Court of Appeal declared the City of Moncton’s English-only bylaws invalid. The following year, under the government of Acadian premier Bernard Lord, a new and broader official languages act passed unanimously. It established the position of Commissioner of Official Languages to oversee the implementation of the Act, and imposed obligations on the province’s seven major cities as well as municipalities with a francophone or anglophone minority representing at least 20% of their population.

The seat of the New Brunswick government is the Legislative Assembly Building in Fredericton, constructed in 1882 in the Second Empire style (similar to the City Hall) from a design by Saint John architect James Charles Dumaresq. The central octagonal cupola, made of sandstone, is three storeys high and soars 41 metres above the main roof. A major landmark, it is visible from almost any point in the city. In the entrance hall is a towering circular staircase. The Assembly Chamber has numerous striking features. The room appears as high as it is wide and deep and is decorated in a typically Victorian style, with lustrous crystal chandeliers and Japanesque wallpaper and carpeting (very popular in the western hemisphere at the time). The building was extensively renovated in the 1980s.