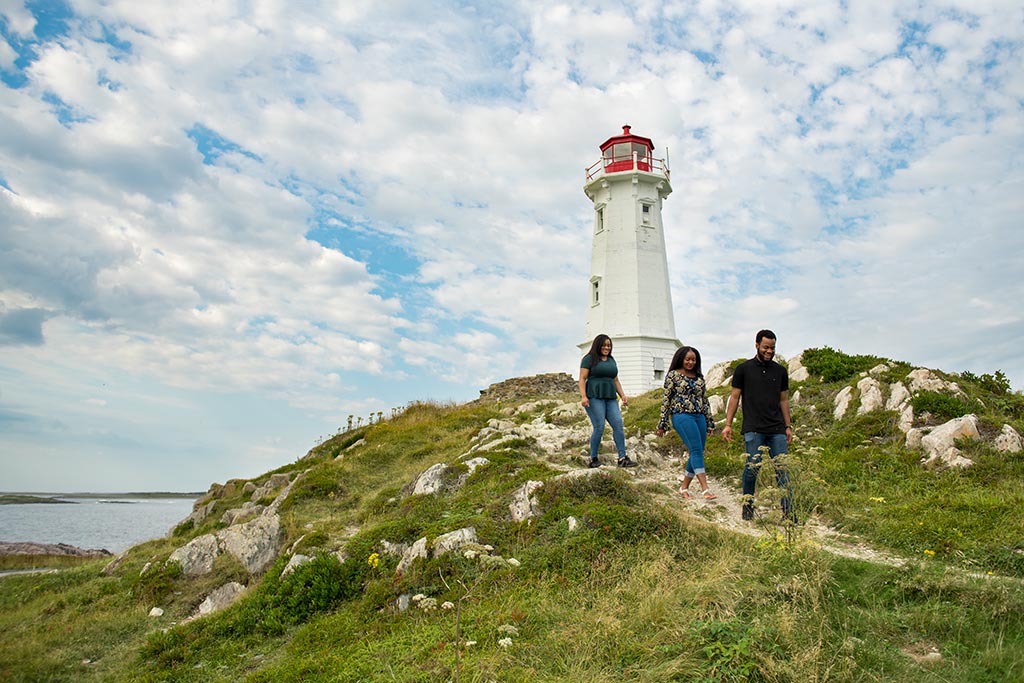 The reconstructed French town and Fortress of Louisbourg is one of the most impressive historical interpretation sites in Canada. High thick stone ramparts surround some 50 buildings, also in stone, as they did in the 18th century. Everything was rebuilt using the original plans and techniques. In this reconstituted fortress town, visitors have the striking impression they are being transported into the past. Dozens of actors in period costume stand guard, fire cannons, bake bread, practice blacksmithing, build boats, do embroidery, play music and dance, just as people did in the glory years of New France. They chat freely with visitors and get them to participate in a number of activities. To visit Louisbourg is to experience authentic life in a colonial French town in 1740s.

Day-to-day life at the time of New France

After a short bus trip, visitors enter the reconstructed town as if they have magically become time travellers. Once inside the fortified enclosure, they explore the buildings, which are furnished and decorated with period or faithfully reproduced objects: the sumptuous apartments of the governor, the elegant dwellings of the merchants, the austere barracks of the soldiers, the warehouses full of kegs, assortments of other materials, and so on. Apprentice artisans use 18th century tools to work wood, iron, the land and cloth as people once did. Visitors can buy soldiers’ bread baked on the premises or eat a meal cooked with the food that was available in Louisbourg in 1744, served on period china, in affordable or luxurious form, depending upon whether they feel more like sailors or captains. The staff embody the kind of people who really lived in Louisbourg: soldiers and officers, merchants, administrators, servants, fishermen and slaves.

You will need a whole day to fully explore this reconstructed town and to stroll around among the ruins, which attest to the incredible size of this improbable town, built on a windy strip of land jutting out to sea, and interact with the people who give the place new life.

The confrontation of two empires in America

In 1713, France had to definitely cede Newfoundland and most of what is now Nova Scotia—in other words, Acadia—to Great Britain in order to save other parts of its empire. However, the colony of New France and the lucrative French fisheries on the Grand Banks of Newfoundland were still threatened by the expansion of the British Empire. France reacted by constructing a powerful fortress town on the Atlantic coast: Louisbourg, which not only served as a rampart against the enemy, but also as a hub for exporting cod to France, and as an immense warehouse that stimulated the triangular trade between the motherland, the Caribbean and New France.

On average, 150 ocean-going ships put in at Louisbourg every year. This fortress town, constructed in an inhospitable region where agriculture was difficult, was an essential link in the chain of France’s economic and military power in North America. This is why it was the target of Anglo-American and British attacks in 1745 and again in 1758. Twice, the “impregnable” fortress capitulated after some 40 days of siege, primarily because it was running out of food. France recovered Louisbourg the first time thanks to a peace treaty signed with England in 1748. However, the city was razed to the ground in 1760 in order to convince the French to permanently give up their colonies in America.

In 1928, the Historic Sites and Monuments Board of Canada classified the ruins of Louisbourg as a Canadian National Historic Site because of the significance of the events that took place there. The government expropriated the property of the several dozen individuals who lived there and opened a museum in 1936. Twenty-five years later, in 1961, the government began the colossal project of reconstructing a quarter of the original town, on the basis of exhaustive archaeological and historical research, carried out on an unprecedented scale. After it opened in 1975, Louisbourg immediately became a major tourist attraction, the leading showcase of our history in Canada. The great quantity of information collected is as impressive as the reconstructed buildings and constitutes a great leap forward in our knowledge of this historical period, and of this site in particular.

Today, this knowledge is embodied in the facilitation and interpretation program, the objective of which is to ensure that visitors have a memorable experience of “living history.”