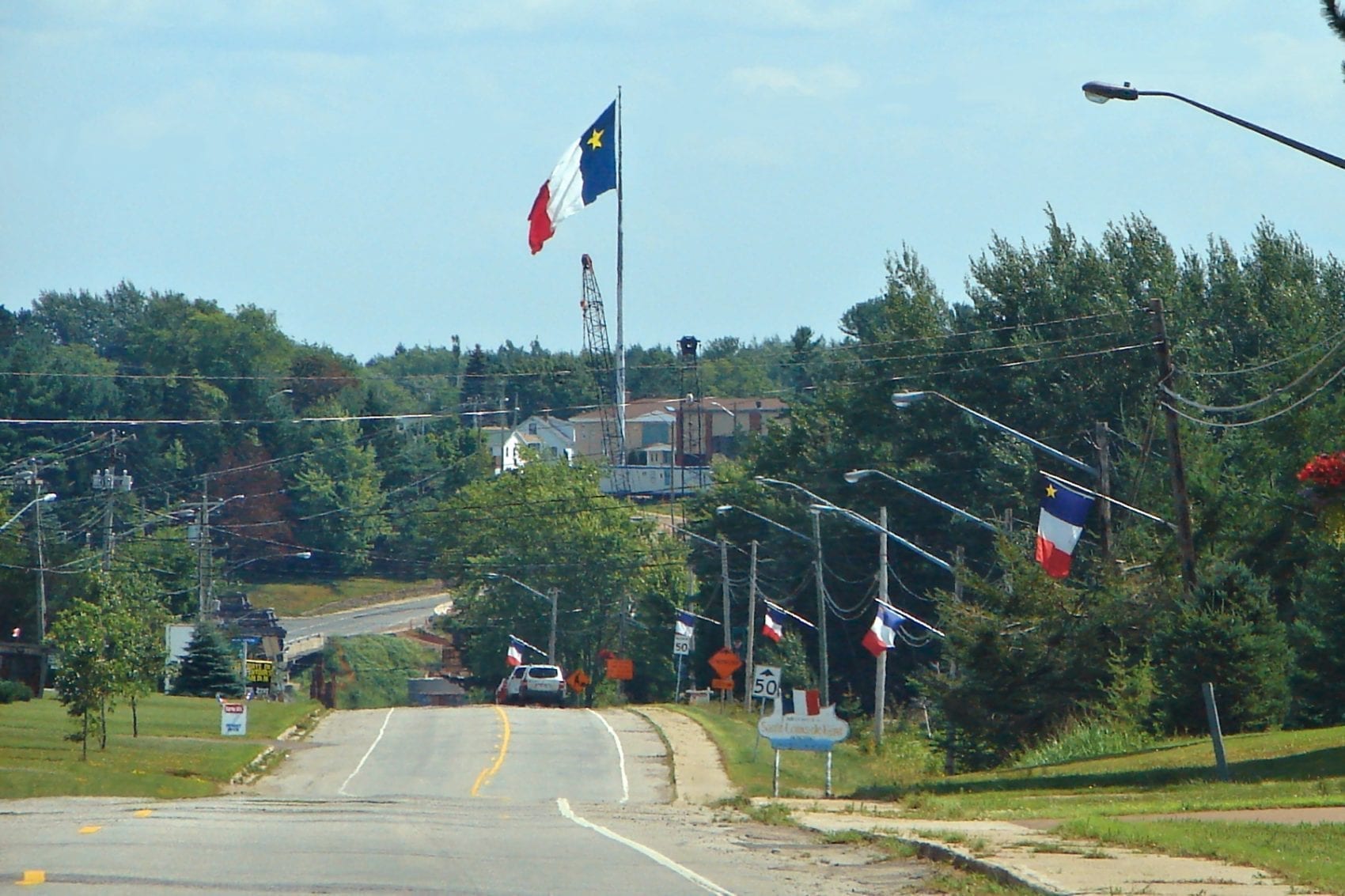 The Acadian flag is the most popular Acadian national symbol. It proudly flies in every Acadian community. In Saint-Louis-de-Kent on the Atlantic shore of New Brunswick, where the flag was designed in 1883, a giant Acadian flag has been flying over the heart of the village since 2009, when it was raised to celebrate the 125th anniversary of its adoption at the Second Acadian National Convention in Miscouche, Prince Edward Island, in 1884. The design that was unanimously adopted by delegates at the convention was proposed by curate Marcel-François Richard of Saint-Louis-de-Kent, who was also president of the third Commission responsible for studying the choice of an Acadian national flag. In the historic park where the flag flies, a statue of Mgr Richard honours the man who is considered the 19th century’s most fervent Acadian nationalist, a role that the Government of Canada recognized when it designated him a Person of National Historical Significance in 2004.

The park also contains a bronze plaque celebrating Mgr Richard’s designation as a Person of National Historic Significance, a cement cross commemorating the creation of Collège Saint-Louis, which Mgr Richard founded in 1874, and a stone monument paying homage to Joseph Babineau, founder of Saint-Louis-de-Kent, as well as a plaque acknowledging the contribution of Marie Babineau, Mgr Richard’s cousin, who sewed the first Acadian flag. Not far from there is a replica of the Grotto of Massabielle in Lourdes, built in 1878, an annual pilgrimage site.

Meaning and popularity of the Acadian flag

Abbé Richard would be pleased to see that his flag stirs up a feeling in his people of being Acadian and wanting to remain Acadian, as he had hoped. In the years following the flag’s adoption, some Acadians thought that its red, white and blue were too reminiscent of the French Revolution for a people as Catholic as the Acadians. But this objection rapidly dissipated.

At the Miscouche convention in 1884, Abbé Richard explained his dislike for the proposals that strayed too far from the French flag by saying: “For us, Acadians, this flag simply tells us that we are French and that France is our motherland… However, I would like Acadia to have a flag which would remind us not only that our children are French, but that they are Acadian. I therefore suggest the following plan for a national flag. The tricoloured flag to be made would represent Acadia, and a yellow star would be added to the blue section. The star represents the star of Mary,” i.e. the star of Our Lady of the Assumption, the mother of Jesus, who was designated the patron saint of Acadians at the first Acadian Convention in 1881, in which Abbé Richard had also played a key role

To become a priest, Marcel-François Richard had to pursue classical studies in English in Charlottetown in the 1860s. At the time, there was only one bilingual (French-English) classical college in the Maritimes, which opened in Memramcook in 1864. The fervent nationalist who would be known as Abbé Richard throughout his lifetime, quickly grasped the importance of education. He would make it his personal mission and guiding principle. In 1874, he founded a college for boys and a convent for girls in Saint-Louis-de-Kent and later helped build some 50 schools. He was also an advocate for colonization. Convinced that the Acadians must extend their territory and develop agricultural lands, Richard continued to promote the establishment of new villages. He was responsible for the creation of the Rogerville and Acadieville parishes, and commissioned the construction of 14 churches.

His incessant pressure on Rome to have the Roman Catholic Church appoint a Francophone Acadian bishop caused him much trouble, since the Catholic clergy in the Maritimes was dominated by the Irish and the Scots, who were wary of Richard’s Acadian activism. Acadian Édouard-Alfred LeBlanc was eventually appointed bishop in 1912, while Richard had to content himself with the position of domestic prelate awarded him by the Pope in 1905.

Richard’s unceasing activity to develop Acadia and preserve the Acadian identity as distinct from the French Canadian identity rooted in the history of New France and not in that of Acadia, had a significant impact during the “Acadian Renaissance” in the final years of the 19th century. His lifelong commitment justifies his designation as a Person of National Historic Significance.