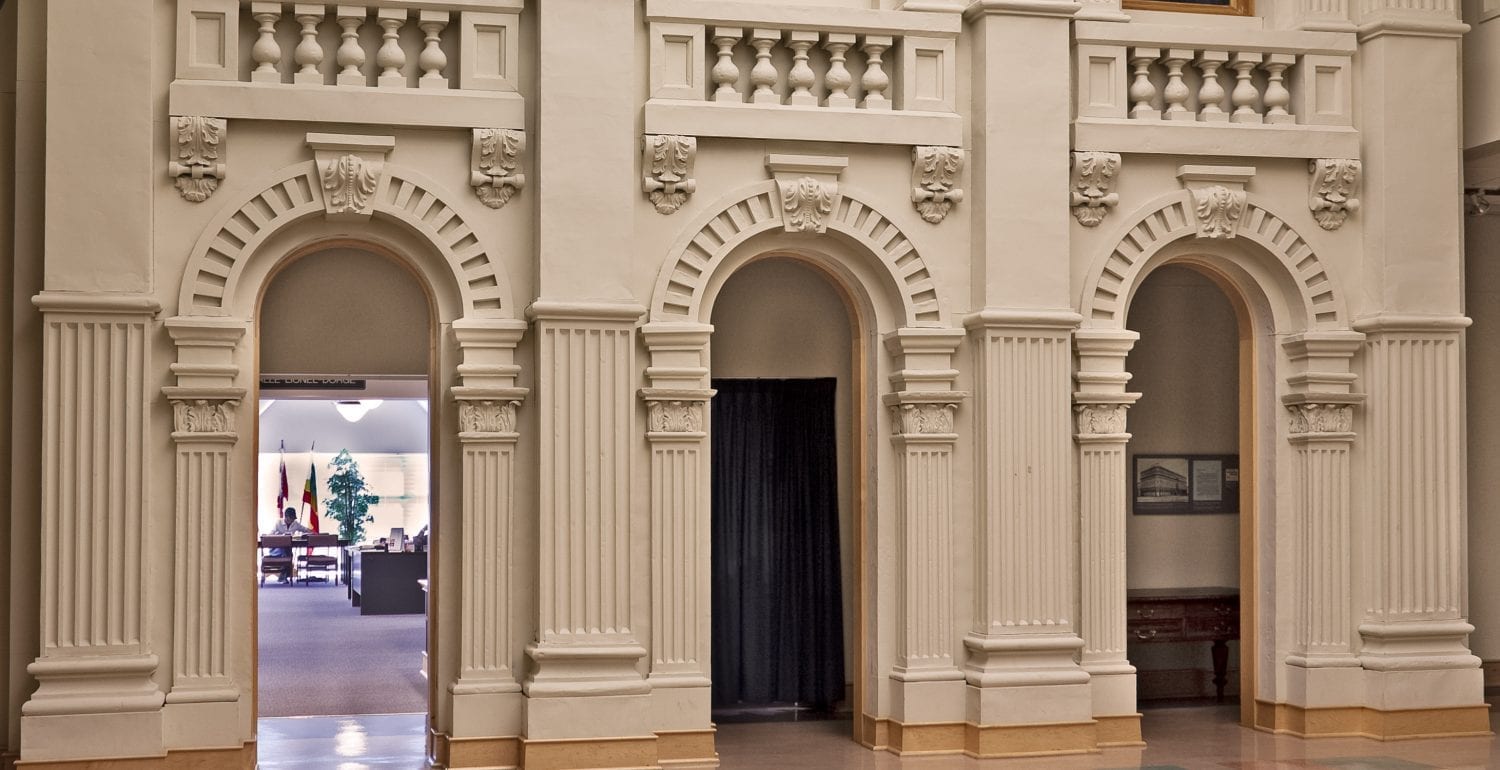 The Centre du patrimoine of the Société historique de Saint-Boniface and the Centre culturel franco-manitobain occupy the same building, located steps away from Winnipeg’s Francophone theatre, the Cercle Molière. Several Francophone organizations are grouped together in this location: community radio, the music organization Le 100 NONS, the Éditions du Blé, the Red River folk dance troupe, an exhibition hall, a restaurant, as well as all the Francophone archives for Manitoba. A number of stakeholders in the Francophone cultural scene are found in this institutional hub, and numerous clients participate in the activities that take place here. The Centre du patrimoine welcomes people doing genealogical research and consulting the various archive sources and documents in its library. Since 1998, this high-quality infrastructure has ensured that Franco-Manitoban memory will continue into the future and has promoted the vibrancy of their culture. The Centre du patrimoine also collects valuable evidence of the changes currently influencing the community’s historical journey.

Collections at the Centre du patrimoine

Anyone who wants to carry out research on French Manitoba, or more generally, on Francophones in Western Canada, should visit the Centre du patrimoine de Saint-Boniface (Winnipeg), where they can consult many different kinds of documents: manuscripts, books, newspapers, maps, photographs, artworks, sound recordings, films and digitized documents. Among some 500 archival sources, some are exceptionally valuable. First of all, the Louis Riel fonds is one of the most important collections of writings from the Métis leader and father of the province of Manitoba. Also noteworthy are the religious archives of the Corporation archiépiscopale catholique romaine de Saint-Boniface, the mother church of all of Western Canada, founded in 1818, and the archives of several male and female religious congregations who played an essential role in French Manitoba, especially the Bibliothèque nationale de l’Archevêché de Saint-Boniface, which includes approximately 30,000 titles. It also includes the archives of the Société historique métisse and those of the Association d’éducation des Canadiens français du Manitoba, not to mention the Canadian Broadcasting Corporation radio and television archives in Manitoba and the works of the Métis artist Réal Bérard and the plans of the Franco-Manitoban architect Étienne Gaboury.

These archives shine a light on the cultural, social, religious, political, economic and legal history of Francophones in Manitoba. The Centre du patrimoine is now the only provincial institution dedicated to acquiring French and Métis archives in Manitoba. To this end, the Centre also offers its services to members of the Métis nation who are looking for documents that confirm their membership in this community.

The Centre du patrimoine also hosts exhibitions presented in the Salon Empire located at the entrance to the centre, such as the CONNEXION exhibition by Nelson Briand Mutima, a young artist from Burundi who emigrated to Winnipeg in 2011, which was organized as part of National Francophone Immigration Week in 2015. At the same time, the Centre launched a project on the oral history of new immigrants in order to document the profound transformations that are occurring at this time in the Franco-Manitoban social fabric. In February 2017, the Centre also presented an exhibition on the role of education in supporting minority Francophone communities, EDU2017, organized by the Fédération nationale des conseils scolaires francophones.

The Centre du patrimoine of the Société historique de Saint-Boniface has carried out an enormous digitization project in order to make part of its collection available on its website. This publication process, which also includes a series of historical information texts on the Francophones of Manitoba, increases knowledge and recognition of the historic role played by Franco-Manitobans and the Centre’s contribution in fostering the culture of the community.

In a wider perspective, the Centre has also preserved part of the façade of the former Cauchon Bloc, built in 1881 and 1882, which was one of the most prominent commercial buildings in Winnipeg. This four-storey building, designed by the architect Louis-Arsène Desy, was commissioned by the journalist, politician, businessman and first Francophone Lieutenant Governor of Manitoba, Joseph-Édouard Cauchon. Its stamped-metal Victorian façade, with decorative cast iron columns covered in galvanized iron, now decorates the Mur du patrimoine, located at the entrance to the Centre du patrimoine, in memory of that influential Francophone and that admirable building, the demolition of which in 1982 revealed the importance of preserving and showcasing Francophone heritage.

The Maison des artistes visuels francophones, created in 2000 in the old St. Boniface city hall, benefited from this heritage awakening and gave new life to this prestigious three-story red-brick classical-style building, with a dome-covered central tower, which is today designated a National Historic Site of Canada. This centre for modern artists contributes to the vitality of the Franco-Manitoban community, and indirectly showcases the community’s built heritage.

Since its creation in 1902, the Société historique de Saint-Boniface, the oldest Francophone historical society in Western Canada,has promoted Franco-Manitoban and Métis heritage. It is the origin of the collections that are currently on display at the Musée de Saint-Boniface, and in the 1970s, it launched a wide initiative to bring together all the Francophone archives in Manitoba. It developed a state-of-the-art building project, comparable to the building that houses the mostly Anglophone Manitoba Provincial Archives, to store Francophone archives and make them accessible to the public. In this way it carries out its mission to honour the memory of Francophones since their arrival in the region starting in the 1730s, as well as of the Métis, through publications, exhibitions, position statements, and various services offered to the public.