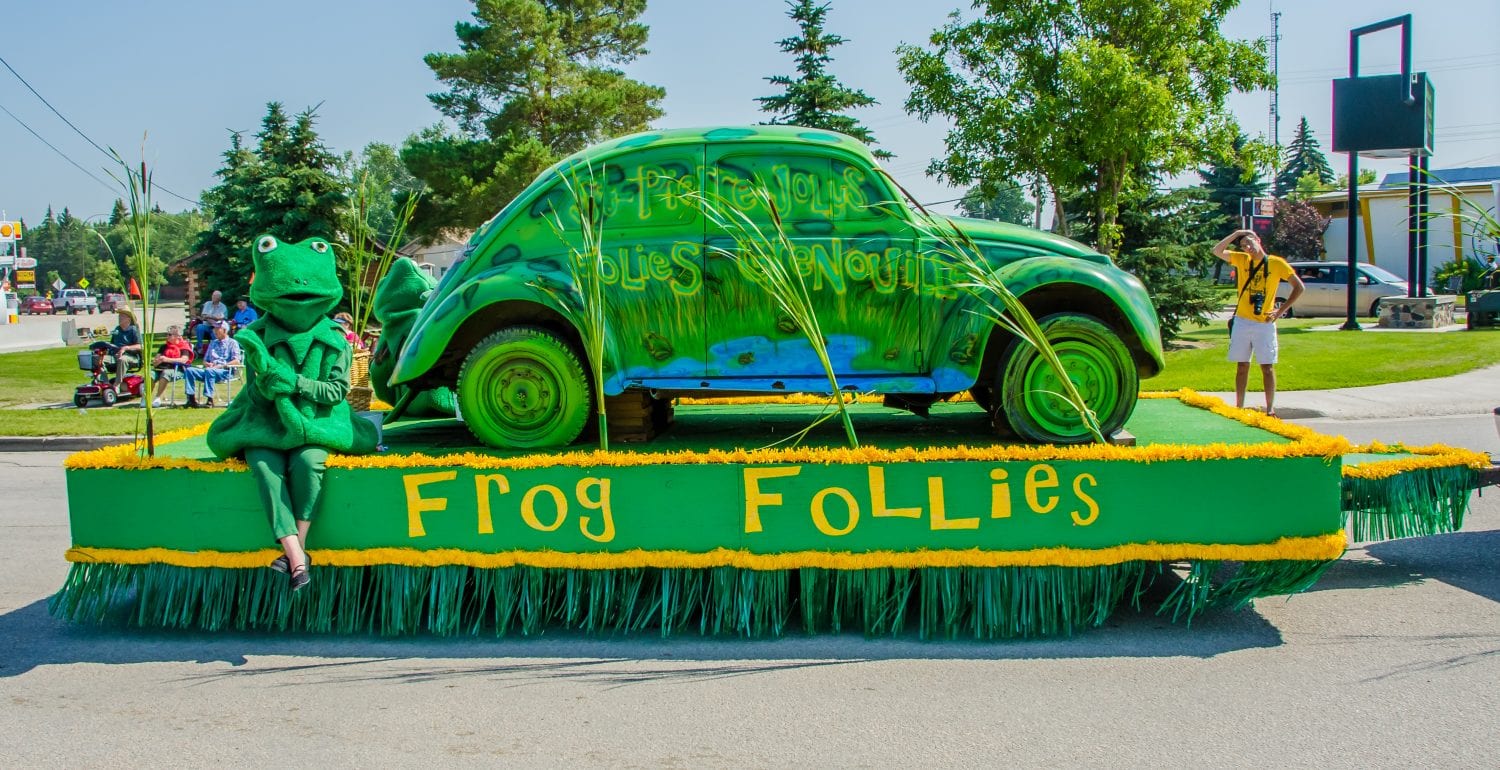 Fifty kilometers south of Winnipeg, St. Pierre Jolys is located in a very fertile agricultural region that attracted the first inhabitants of Métis origin to settle there in 1872. Today, the Métis and French-Canadian population, still Francophone for the most part, is very popular because of its springtime Sugaring Off Festival and its Frog Follies and Agricultural Fair in the summer. This dynamic rural community also showcases two historic buildings, the Goulet House and the St. Pierre Jolys Museum, located in a former convent. Their exhibits illustrate the lifestyles of the Métis merchants and the female religious communities, who played an important role in the region.

Having fun in St. Pierre Jolys

The village’s sugar shack, built by Armand Desharnais, the first resident to tap maple trees and produce maple syrup in St. Pierre Jolys, is one of the only places in Manitoba where the public can learn how maple products are made and taste them. Well-known local artist Réal Bérard designed a second, more spacious sugar shack in 1998 to welcome more visitors to the springtime Sugaring Off Festival.

Frog Follies, inaugurated in 1970 in the presence of the Queen of the United-Kingdom, Elizabeth II, is based on a truly original activity: the Canadian National Frog Jumping Championship, starring frogs and their “masters”. Of course, the contest is just a pretext to hold other family and sports activities, shows and performances. Held since 2009, this event takes place at the same time as the St. Pierre Jolys Agricultural Fair, which attracts thousands of people.

The convent of the Sisters of the Holy Names of Jesus and Marie, which educated parish girls, is a four-story building constructed in 1900. It is classified as a heritage site of Canada because of its typical architecture. Today it houses the St. Pierre Jolys Museum, which illustrates the lives of the students and nuns at this convent. It also pays homage to the members of this religious congregation, which fostered the development of the Francophone population in the region.

Goulet House was moved to the large wooded lot of the former convent. It was built at the end of the 19th century out of logs hand cut by Métis freighter Moïse Goulet, in the Red River style. The house was used to accommodate other Métis freighters who travelled the St. Paul Road (Crow Wing), which connected Fort Garry (Winnipeg) to St. Paul in the United States. Moïse Goulet and many other Métis freighters transported various merchandise in Red River oxcarts, on trails they blazed through the prairies. One of these famous carts completes the exhibit at Goulet House, which is furnished and decorated as it would have been in the 19th century. Today, it serves as an interpretation site that depicts the life of the Métis from that era.

A bit of history

n July 1872, some 30 Métis from St. Norbert went to occupy the lands bordering the Rat River. The parish priest of St. Norbert, Abbé Ritchot, encouraged them to do so before Canadian government surveyors came to seize these very fine agricultural lands. Abbé Ritchot was one of the three people sent to Ottawa by Louis Riel in 1870 to have the property rights of the Red River Métis respected and to promote the entry of Manitoba into Canadian Confederation. However, in 1872, it became clear that the rights obtained by the Métis would not be easily upheld and that moving away from the more coveted areas, such as the Red River (today Winnipeg) or St. Norbert, would be a wise precaution. This is why he strongly encouraged some Métis to settle as quickly as possible on the fertile lands that bordered the Rat River.

In 1877, the mission established at the Rat River included some 20 families and was called the St. Pierre Mission. Abbé Jean-Marie Jolys, born in France, took over the mission and had a chapel and the first schools built. Abbé Jolys subsequently made many efforts to recruit new French-Canadians colonists from Quebec and the United States, where they had immigrated. They were all Francophones. In 1922, the community came to be known as St. Pierre Jolys, to pay homage to this colonizing priest.