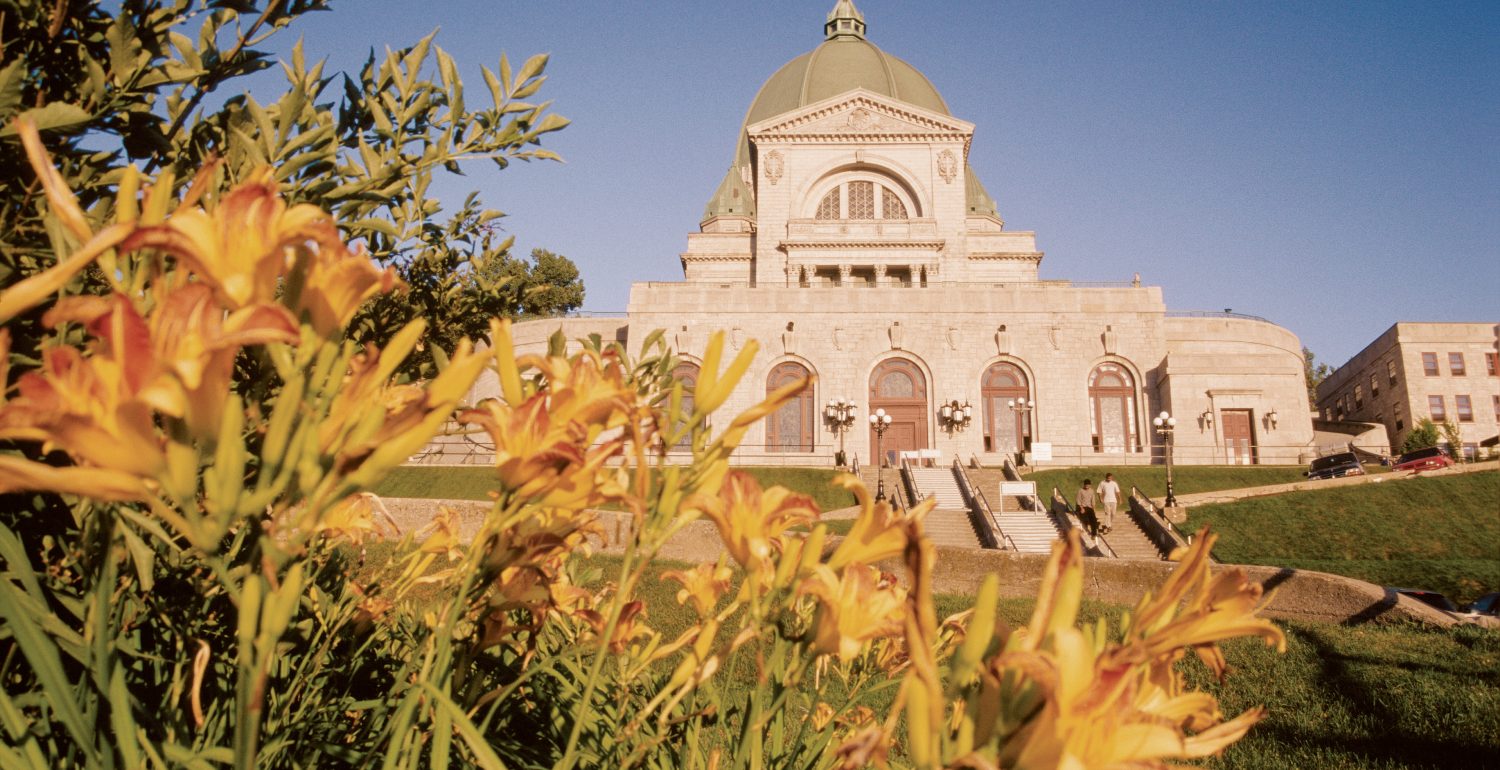 Nestled into the side of Mount Royal since 1904, St. Joseph’s Oratory attracts more than two million visitors and pilgrims from all over the world every year. This National Historic Site of Canada is one of the most visited sites in Montreal. It is also the most frequented pilgrimage site dedicated to St. Joseph in the world. Visitors also pray for Brother André, the Oratory’s founder, who was canonized in 2010 and is famed among people of all denominations for his generosity and humility. With its basilica, Stations of the Cross, crypt and many works of art—not to mention the magnificent surrounding greenery—the Oratory is a heritage complex that is an integral part of the historic and natural district of Mount Royal.

A pilgrimage site rich in art and history

For the hundredth anniversary St. Joseph’s Oratory’s consecration, Pope John Paul II presented a Golden Rose as a gift to its bishop and rector, Monsignor Aumont. It was the first Canadian place of worship to receive this token of honour and merit.

The basilica is a magnificent example of religious heritage, to which many renowned artists and architects contributed. In the biggest church in Canada, visitors can admire the delicately sculptured high altar, episcopal see, Calvary and twelve apostles. They can also contemplate the splendid indoor Stations of the Cross, bronzes and stained glass windows depicting the virtues and qualities of St. Joseph. The two Casavant organs, dating from 1917, and the great mechanical organ of Rudolf von Beckerath, built in 1960, can be heard during religious celebrations and lay concerts.

The hundreds of steps that lead up to the church, which are built into the side of the hill, are famous for the many pilgrims who climb them on their knees, praying for St. Joseph to answer their prayers. In the gardens that surround the building, pilgrims can also visit the Stations of the Cross, consisting of life-sized sculptures in a peaceful garden park.

Brother André is inseparably linked to St. Joseph’s Oratory. André Bessette, his Christian name, came from a poor family in Montreal. The sickly orphan joined the Congregation of Holy Cross when he was 12 years old. He swore his final vows in 1874, thus officially becoming Brother André. For 40 years, he performed the duties of porter, housekeeper and nurse’s assistant at the Collège Notre-Dame du Sacré-Cœur.

This college, the second educational institution of the Congregation of Holy Cross, was founded in Montreal in 1847. To handle the increasing number of students at Académie Saint‑Laurent, the congregation opened the Collège Notre-Dame du Sacré-Cœur across from Mount Royal. This is where Brother André, a humble and charismatic man, started to care for people who came to him. He sometimes anointed them with oil and, especially, recommended that they pray and place themselves under the protection of St. Joseph, to whom he ascribed all his healing gifts. The rumour quickly spread that Brother André was curing the sick. So many people wanted to meet him that he started to receive them in a booth built between the college and the mountain. Brother André’s devotion was part of a long-standing French-Canadian tradition, for St. Joseph has been the patron saint of Canada since 1624.

Brother André had long wanted to build a chapel dedicated to St. Joseph in Mount Royal Park. He soon managed to collect enough donations to realize his dream. Over time, the constant flow of donations made it possible to expand this chapel, of which Brother André officially became the custodian in 1908. That year, the religious authorities confirmed that the first miraculous cure had occurred. The fervour among the public was so great for the man nicknamed “the Miracle Worker of Mount Royal” that construction was begun on a basilica, which Brother André would not see completed before his death in 1937.

St. André and his heritage

On the fourth floor of the Oratory, an exhibit traces the steps in the life of Brother André and testifies to his spiritual heritage. The exhibit includes the reconstruction of his caretaker’s lodge, at Collège Notre-Dame, where he began to receive the sick. The votive chapel, built in the 1940s, includes a collection of the many ex‑votos left by patients who thanked Brother André and St. Joseph for curing them. They all date from the lifetime of Brother André. The most precious relic on exhibit is the heart of Brother André, preserved in an alcove.

For his devotion and the miraculous cures attributed to him, which were formally confirmed by the Church, Brother André was declared venerable in 1978, beatified in 1982 and canonized in 2010. St. André now watches over the vast place of worship that he helped to build in honour of St. Joseph.