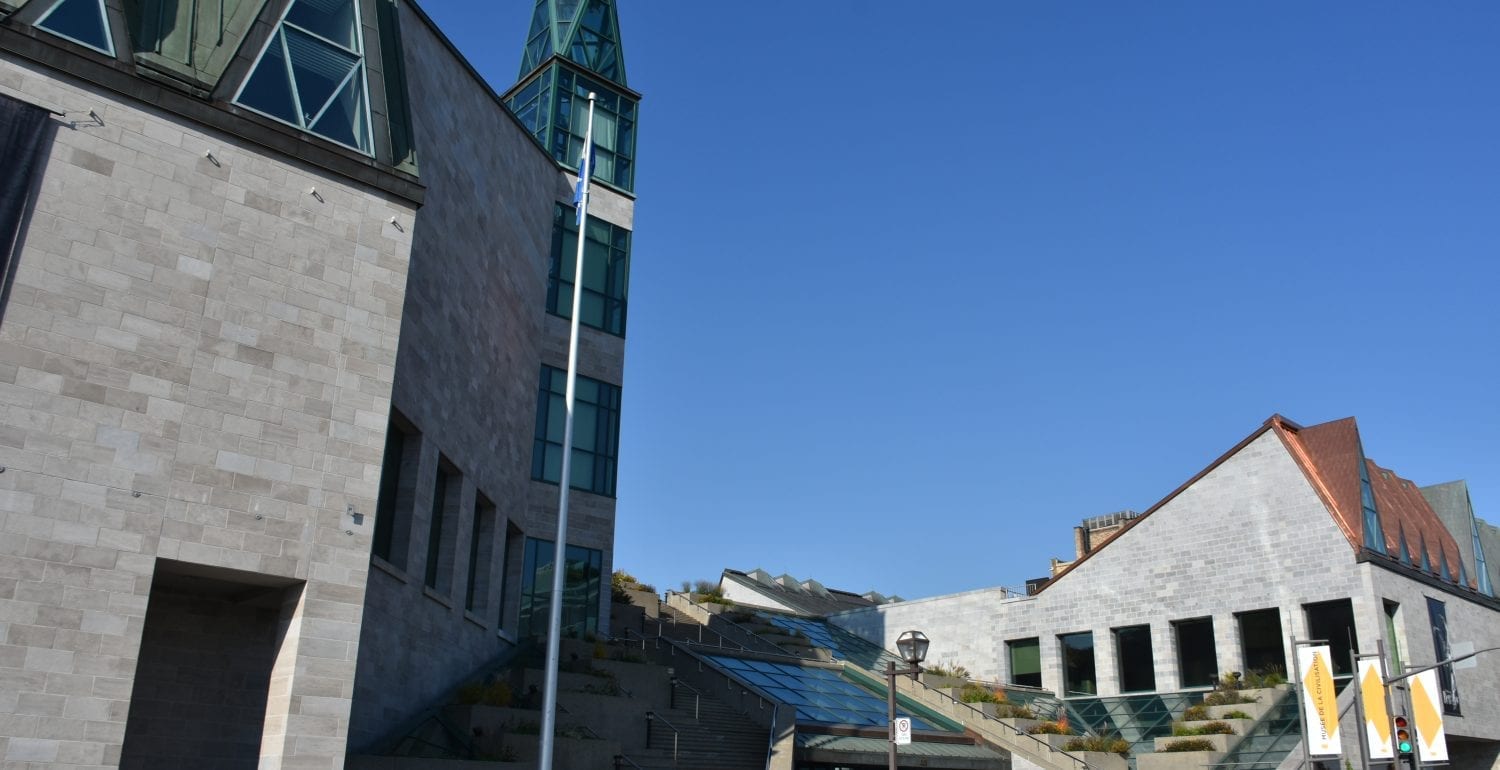 The Musée de la civilisation du Québec in Quebec City is a society museum that deals with all facets of the human experience in its exhibitions, whether the functioning of the human body, a cultural manifestation such as song, or the history of the world’s peoples. Its dynamic museological approach makes it one of the most visited museums in Canada. Its permanent exhibition People of Québec … Then and Now presents the history of French immigrants who put down roots in New France. It starts with the alliances that they formed with the Indigenous peoples who lived in the area before them, continues with the cohabitation of French-Canadians and British immigrants and the American influences that shaped Quebec culture, and ends with the issues that are debated today in Quebec. This exhibition is an excellent starting point for understanding the historical journey of Quebecers and the current state of Quebec, the only majority Francophone province in Canada.

The Musée de la civilisation is renowned for its use of audiovisual and interactive technology in its exhibitions. People of Québec … Then and Now is no exception, although emphasis is placed on the collection of objects and the written information presented in several dozen short vignettes, separated by theme and period. A dozen audiovisual installations display documents from the early 20th century and more recent years. The French documents are subtitled in English. All the bilingual texts are extensively illustrated.

The objects taken from the Musée’s very rich collection have pride of place. They are all precisely documented. Amerindian pipes found during archaeological excavations and an Indigenous bark canoe; a model of the first Habitation built by Champlain, the founder of Quebec; a copper cauldron traded for fur; a travelling trunk of 17th-century immigrants; a grandfather clock; a wrought-iron cross; portraits of clerics; a reproduction of the first printing press introduced at the beginning of the British regime; advertisements; an industrial sewing machine; a telecommunications device used during Expo 67; a stage costume of the singing star Robert Charlebois, etc. In their own way, all of these objects express certain important steps on the historical journey of Quebecers.

The exhibition in brief

The exhibition first recalls the presence of Indigenous peoples in the current territory of Quebec. From the time of their arrival in the early 17th century, the French allied with the Indigenous peoples, who provided them with furs. These alliances were long-lasting and fostered generally harmonious relationships between the two peoples.

Life in New France and in the vast Indigenous territories where the French had an increasingly large influence—i.e. over more than half of the North American continent at the end of French rule—was sufficiently different from life in France that it caused a significant cultural and institutional adjustment. At the end of French rule, the culture of the Canadians (the French born in New France) was much different from that of their French cousins.

After the conquest of New France by the British in 1760, this evolution continued. The British desire to assimilate the Francophone population to their customs and way of life was tempered by practical considerations. The British made concessions to the conquered people to promote peace and optimize the functioning of society and the economy. The 1774 Quebec Act established a hybrid society, half-Canadian (from New France) and half-British. With immigration from the United Kingdom and the United States, which declared independence in 1783, the population increased and diversified rapidly. Democracy, inspired by the British system, appeared in 1791. The Catholic faith, which remained strong among the population, allowed the Catholic Church to progressively regain strength, even under British Protestant authority.

In 1831, only 11% of the population was urban. In 1941, this proportion had increased to 61%. Urbanization went hand in hand with industrialization. The phenomenon was particularly noticeable in Montreal, which became the industrial metropolis of Canada in the late 19th century. However, the living conditions of Francophone workers were often miserable, while the richest Anglophone property owners led an opulent lifestyle in the Golden Square Mile, at the foot of Mont Royal. The first Catholic Quebec unions were often conciliatory, as the Church firmly supported the authorities and feared the rise of secular unions in the United States.

The exhibition addresses several famous personalities in Quebec, including the successive premiers Adélard Godbout, Maurice Duplessis and Jean Lesage. The latter ushered in the Quiet Revolution, which began in 1960. This social, cultural and economic emancipation movement occurred quickly, in parallel with the secularization of society. The world exhibition that took place in Montreal in 1967, Expo 67, symbolized this trend of development and opening up to the world. The Quiet Revolution also gave birth to a political movement based on the idea that Quebec sovereignty was a way to realize the full potential of the Quebec people.

The exhibition deals with the contemporary period through a series of questions. Is the “Quebec model,” inherited from the Quiet Revolution, of a more interventionist state than elsewhere in Canada, offering a wider range of services, a wider social safety net and less of a gap between rich and poor, still relevant? What is the relationship between the Quebec community and the French language, which was made the sole official language in 1974? What will be the impact of the arrival of immigrants of increasingly diverse origins, and of new information technologies?

Echoing these questions, the last table in the exhibition presents a cloud of keywords illustrating the concerns of thousands of Quebecers according to a recent survey by the Musée. Climate change and pollution, the national question and the rights of women are among the major themes mentioned by participants in the survey. Before leaving the exhibition, visitors are encouraged to identify the issues that they feel are the most important for building the Quebec of tomorrow.