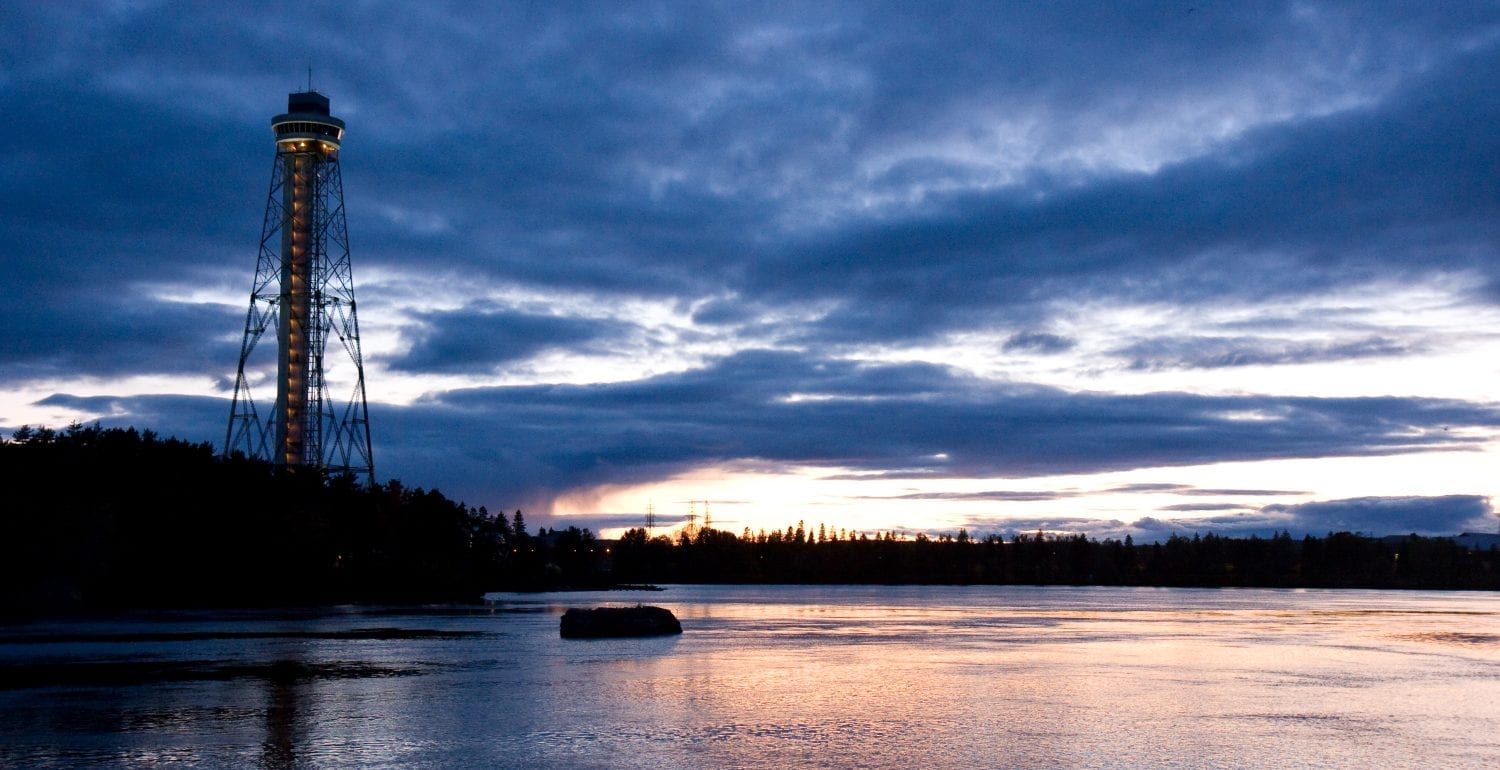 Cité de l’énergie is a science and heritage theme park featuring hydroelectric plants and industrial buildings erected at the foot of the Shawinigan Falls in the early 20th century. The name “Cité de l’énergie” stresses the importance that hydroelectricity played in the development of this industrial complex and of Quebec as a whole. The first Quebec aluminum smelter, built at this location, was turned into a large interpretation centre. Meanwhile, the Shawinigan-2 hydroelectric plant, commissioned in 1911, is the oldest one still in operation in Quebec. Interactive exhibits on natural energy and energy issues of the future, scientific innovation and the day-to-day life of Shawinigan residents round out the tour of these incredible heritage properties. A 115‑metre high tower gives visitors a bird’s‑eye‑view of the site’s layout and offers vistas of the Saint‑Maurice River and the city of Shawinigan. A stunning family multimedia show featuring Amos Daragon, a popular Quebec teen fiction hero, is also presented in the evenings.

The idea of building a hydroelectric museum at the Northern Aluminum Company plant, the first Quebec aluminium smelter that began production in 1901, was initially proposed in 1947. However, it did not resurface until the 1970s, when the industrial decline of the Shawinigan region forced policy makers to diversify the economy by focusing on this valuable industrial heritage. A new, more ambitious plan was born out of the efforts of the Corporation du Centre d’interprétation de l’industrie de Shawinigan, with the Cité de l’énergie opening in 1997.

Hydro-Québec welcomes visitors to many of its hydroelectric facilities, particularly at Beauharnois, Manic-5 and La Grande-1, which are the best known. It also collaborates on the Cité de l’énergie project by providing public access to its Shawinigan-2 plant, still in operation with its original turbine generator units installed in 1911. The old control room and other obsolete equipment have also been left in place for interpretation purposes. In 1987, Engineers Canada designated this plant, originally built by Shawinigan Water and Power, as one of the 25 greatest feats of Canadian engineering in the 20th century.

In addition to the old Northern Aluminum Company hydroelectric plant, built in 1901 and converted into a scientific activity and interpretation centre, the old aluminium smelter consists of a complex of 12 brick buildings erected between 1900 and 1927. These buildings showcase the industrial architecture typical of the early 20th century and are of great heritage value, as they exemplify the beginnings of the electrometallurgical industry so important to Quebec due to its abundant and low-cost electrical resources. The old Shawinigan aluminium smelter is also a heritage building designated by the QuebecDepartment of Culture and Communications.

The guided tour of the city of Shawinigan, which starts in Cité de l’énergie, explains how this planned city rose almost overnight—1,500 people built the city core in two years—based on the urban development scheme designed by Montreal firm Pringle & Sons. The city as it stands today has largely kept to this plan, which aimed to accommodate a population of 20,000 people.

Addition of scientific and fun activities

Cité de l’énergie was designed to appeal to a broad, mainly family‑oriented public who would spend several hours at the site. The first area that visitors access is scientifically themed. A multi-sensory multimedia presentation and interactive displays are intended to raise the public’s awareness of the importance of scientific knowledge and innovation. An elevator ride to the top of the 115‑metre observation tower offers both a fun and an educational experience that informs visitors about the functional layout of the facilities and industrial buildings, while offering a breathtaking panorama of the Saint‑Maurice River, the city of Shawinigan and the surrounding area.

The so-called historical area is accessed by taking a pontoon ride across the Saint‑Maurice River. Here, visitors discover heritage buildings and interactive exhibits in which fun scientific demonstrations are held. For the past few years, a big-budget multimedia show created by author Bryan Perro, featuring his character Amos Daragon, in a rotating, covered and heated amphitheatre, has put a decidedly playful spin on the visit to Cité de l’énergie. A recent exhibit also highlights the work of the “little guy from Shawinigan,” Jean Chrétien, in Canadian foreign policy during his three successive terms as Prime Minister of Canada, through the many items he received as official gifts.

The origin of the word “Shawinigan”

According to the Commission de toponymie du Québec, the word “Shawinigan” has Amerindian roots. Nineteenth-century Francophone authors had various spellings for it: Chaouinigane, Oshaouinigane, Achawénégan, Chawinigame and Chaouénigane. Its translation also varies, from “south portage,” “beech portage” and “angular portage” to “summit” or “crest,” which would be the most plausible meaning. It would allude to the crest of the rocks that the nomadic Algonquin peoples had to cross in their travels as they portaged in order to bypass the falls. The “Shawinigan” spelling appeared around 1800 and was adopted due to the importance of the Shawinigan Water and Power Company, which acquired the falls and the surrounding area in 1898 to build a dam, a power plant and the planned city of Shawinigan Falls.