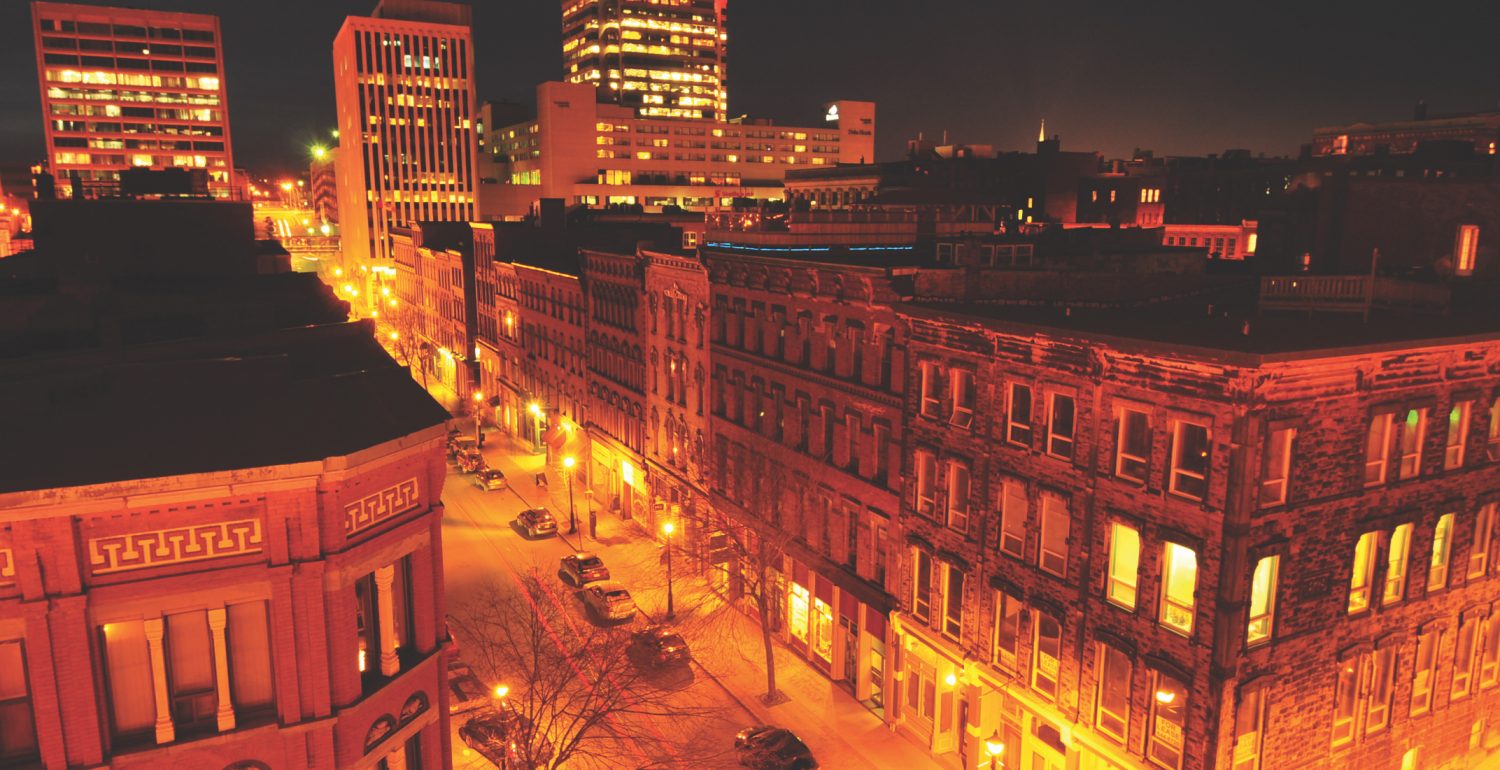 One of the founders of Acadia, Charles de La Tour, built a fortified fur trading post in 1631 at the mouth of the Saint John River, where the city of Saint John is today. This was not a destination of choice for Acadians, who for the most part settled on the other side of the Bay of Fundy, in what is currently the province of Nova Scotia. After the Deportation, many came or returned to the region hoping to settle there, but so many British loyalists were fleeing the American Revolution that they took up all the land and drove the Acadians further out. In the 20th century, many Acadians came to work in Saint John, the second largest city in New Brunswick. Today, this Francophone community shows great vitality and is very creative in how it organizes itself. The Centre scolaire communautaire Samuel‑de‑Champlain, established in 1985 and expanded in 2008, is the main outreach and gathering place for the some 2,700 Francophones who now live in Saint John, according to the 2016 Census.

The Centre scolaire communautaire Samuel-de-Champlain—named for Samuel de Champlain, who passed through the region in 1604—is a large building home to a number of Francophone organizations, including the Maison des jeunes ZonAdo youth centre, a 500‑seat auditorium called Théâtre Louis Vermeersch, the CHQC 105.7 FM community radio station, the Le Saint-Jeannois newspaper, the Médisanté Saint-Jean health centre, and the Le Cormoran library, which has over 30,000 French‑language books, newspapers and magazines. Of course, the Centre also has a Francophone school attended by more than 800 students from kindergarten to Grade 12, in addition to a daycare.

The school-community centre concept was introduced in 1978 in Fredericton, the capital of New Brunswick, to promote not only the city’s Francophone minority education, but also its community and cultural life. The presence of children and adults and educational, cultural and community activities under one roof creates a richer French living environment and builds a stronger sense of belonging. It encourages networking and project development, not to mention common use of infrastructure, such as the library, gym and performance hall. This type of grouping of services is particularly important when the community is not very concentrated, as in Saint John. The Centre then becomes the main gathering point where the community’s vitality is expressed and is an asset for its development.

Sam Chante is a good example of a project carried out by a school‑community centre. During the school year, students aged 8 to 12 fromÉcole Samuel-de-Champlainlearn the songs of an influential Acadian artist. At the end of the year, they take the stage with that artist and participate a public performance. That is how stars like Zachary Richard and Wilfred LeBouthillier came to perform in the Louis Vermeersch auditorium accompanied by students from the Sam Chante project, an unforgettable experience for the students, audience and artists.

New Brunswick’s provincial museum is a major cultural attraction in Saint John. Its bilingual exhibitions cover a variety of topics: the province’s natural, artistic, economic and social history. The Museum increasingly acknowledges Acadians’ contribution to New Brunswick’s past by, for instance, celebrating National Acadian Day on August 15. It is also collaborating with the Saint John’s Fort La Tour Development Authority on a project to present the Fort La Tour historic site, which they want to reconstruction. In 2017, the Museum participated in the unveiling of two historical murals. One pays tribute to the Indigenous peoples who had been coming to the Saint John River for millennia when Acadians began trading with them. The other one features the courageous defence of Fort La Tour, led by Françoise-Marie Jacquelin—the wife of Charles de La Tour—in his absence, against the assault orchestrated by their rival, Charles de Menou d’Aulnay.

After Samuel de Champlain passed through the mouth of the Saint John River in 1604, Charles de La Tour had a fortified trading post built in that location in 1631, as the river was the largest source of fur supply in Acadia. Charles de La Tour was on good terms with Isaac de Razilly, who was appointed Acadia’s governor in 1632 and who had settled in Port Royal, on the south bank of Baie Française (now Bay of Fundy). In 1635, however, after Razilly’s sudden death, the antagonistic attitude of his successor, Charles de Menou d’Aulnay, triggered a series of hostilities between the two rivals. The conflict came to a head in 1645, when Menou d’Aulnay and his men attacked Fort La Tour when Charles de La Tour was away on business in Boston. For three days, his wife Françoise-Marie Jacquelin led the defence of the fort with 40 or so men. After the fort was taken by Menou d’Aulnay, La Tour’s supporters were executed for treason and the fort was looted and burned. Françoise-Marie Jacquelin apparently died of grief or despair shortly afterward.

After 1730, especially, a small number of Acadians chose to live in the region, but the Deportation of 1755 displaced them all. Those who returned could not secure deeds to the land they wanted, unlike the loyalists who arrived by the thousands between 1783 and 1785 in ships that dropped anchor at the mouth of the Saint John River. The city of Saint John, incorporated in 1785, was nicknamed Canada’s Loyalist City. Acadians were therefore forced to find another place to rebuild their lives, with most travelling to Madawaska. In 1923, the Fort La Tour site was designated a National Historic Site of Canada.