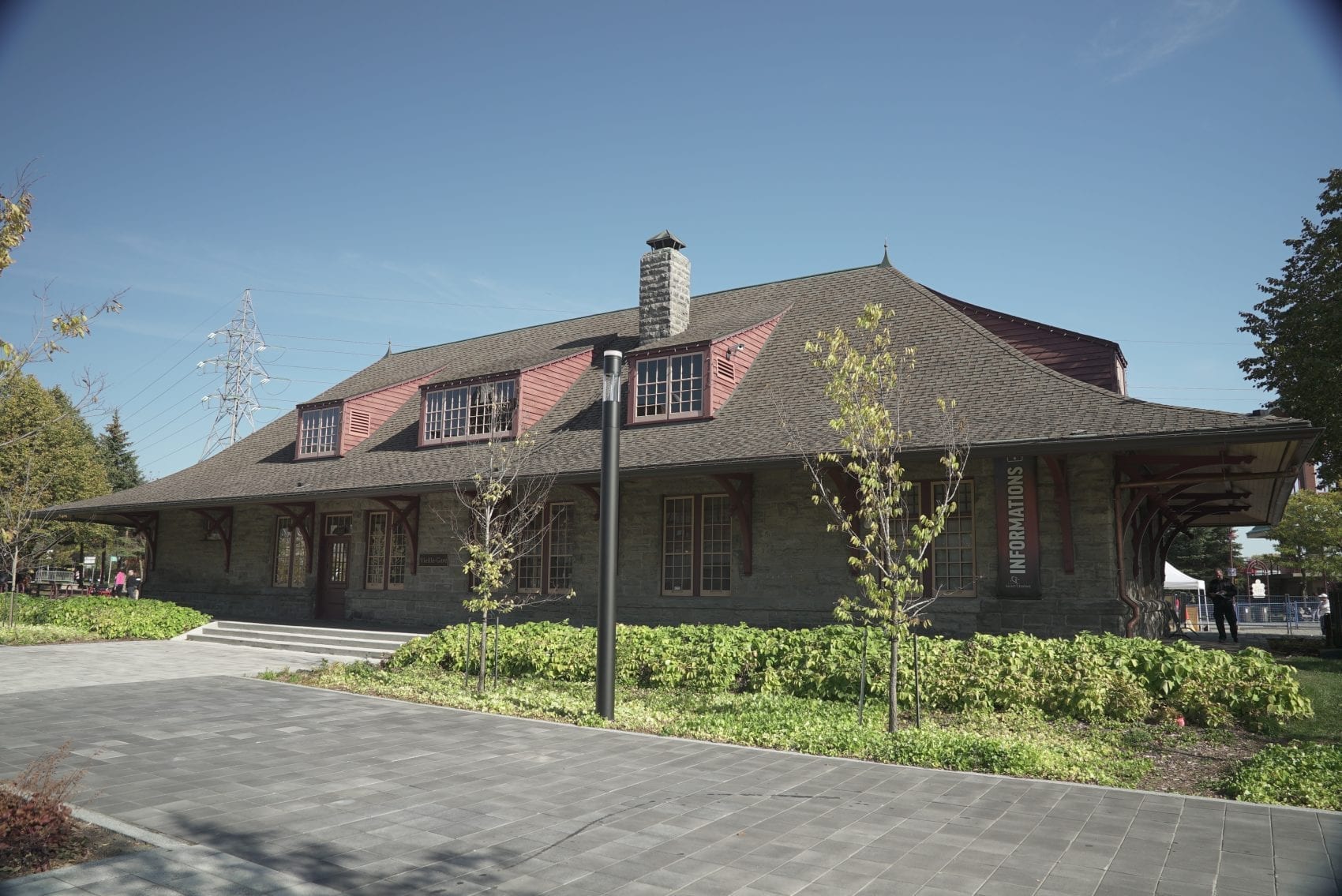 The forestry, farming, sports and tourism landscape of the Laurentian region, which lies north of Montreal, has changed significantly since the days of Father Labelle in the late 19th century. In 2015, the Route des Belles-Histoires was annexed to the Le P’tit train du Nord recreational trail that runs from Montreal to Mont-Laurier along the old railway for which Father Labelle had fought so hard. This new official Quebec tourist route takes visitors to lesser-known parts of the region, famous for its ski slopes, gastronomic delights and resort getaways. Using former train stations as service centres, exhibition venues and gathering places, it showcases the heritage of towns born during the settlement of the Pays-d’en-Haut, in which Father Labelle was one of the key figures. The name “Belles‑Histoires” speaks to this historical focus and refers to the works of Claude‑Henri Grignon, whose Les belles histoires des Pays-d’en-Haut was told in the immensely popular novel and radio and TV serials.

A wide range of heritage resources

Over a distance of 284 km from Saint-Jérôme to Mont-Laurier, the Route des Belles‑Histoires follows the railway that carried passengers and goods between Montreal and the Upper Laurentians. It features dozens of historical and heritage buildings, sites and routes that enhance the tourism offering in this highly visited region. For the cyclists, skaters, skiers and snowmobilers that take the Le P’tit train du Nord trail, the longest in Canada, it showcases the heritage of the towns they pass through. For the many ski resort visitors and other vacationers who come to the Laurentians for a getaway, it provides an immersion into the history that has shaped this beautiful region.

Here are a few of the top attractions among the Route’s many offerings. In Saint‑Jérôme, a free exhibition called Le Roi du Nord, or King of the North, talks all about Father Labelle, while another highlights the importance that Claude‑Henri Grignon’s masterpiece played in the imaginations of Quebecers. In Saint‑Sauveur, the Laurentian Ski Museum recounts the popularity of the sport in the first half of the 20th century. In Sainte‑Adèle, breathtaking murals present the agricultural way of life and the winter leisure activities of days gone by, as well as the significance of the railway. The La Butte à Mathieu music café, the first to open in Quebec, is still going strong in Val‑David. Right next door, Sainte‑Agathe-des‑Monts is home to another music café that is legendary on the Quebec cultural scene: Le Patriote. A cruise on Lac des Sables introduces visitors to the history of Sainte‑Agathe-des-Monts. The 27 larger-than-life figures of the Calvaire d’Huberdeau, located on the top of a hill that overlooks the entire region, were cast in bronze between 1910 and 1920. In addition to the Mont Tremblant National Park and the famous Tremblant ski resort and village, a historical walking tour reveals the amazing heritage of the town of Mont-Tremblant. In La Macaza, the interpretation guide for the Le P’tit train du Nord trail depicts the park’s heritage and environment on some 40 interpretation panels. In Mont‑Laurier, a schoolteacher from another time takes visitors on a guided tour called Marchons notre histoire, which unveils the town’s history. These are but a few examples of the treasures in store on the Route des Belles-Histoires.

Father Antoine Labelle arrived in Saint-Jérôme, a prosperous and populous parish on the northern boundary of the St. Lawrence Plain, in 1868. At the time, the more northern regions were populated only by a handful of pioneers who had settled on the tributaries of the Ottawa River, through which the forest industry shipped timber by log drive. Father Labelle was a staunch believer in the region’s potential, in terms of not only its agricultural and mining resources, but also tourism and manufacturing—as long as a railway was built through the region. Owing to his political involvement and dedication, the first section of railway was built to Saint‑Jérôme in 1876. Gradually, the railway was extended to Mont‑Laurier in 1909, nearly 20 years after Father Labelle’s death in 1891. This man of the cloth explored the Laurentians himself to find the best areas for settlement, founded some 20 parishes, and welcomed 5,000 or so new settlers. Designated a historic person under Quebec’s Cultural Heritage Act, Father Labelle is beyond a shadow of a doubt one of the key figures responsible for the settlement of the Pays-d’en-Haut.

The forest industry was the first to benefit from the railway. The farming population also benefitted. In the 1920s to 1940s, “snow trains” brought thousands of skiers to the Laurentians to enjoy their favourite sport. At the same time, rich nature lovers built country homes to revel in the wild beauty of the Canadian Shield. This turned the Laurentians into a favourite playground for Montrealers and sent the tourism industry booming. Today, a full range of activities makes the Laurentians one of the top leisure destinations in Quebec.

Even though Les belles histoires des Pays-d’en-Haut is a work of fiction, its author, Claude‑Henri Grignon, born in Sainte-Adèle in 1894, created characters that were so very much like the real‑life Father Labelle that, from 1956 to 1970, they embodied Quebecers’ view of country life in the late 19th century. From the initial publication of the novel Un homme et son péché in 1933 to its TV adaptations in the 2000s, Father Labelle and the Pays-d’en-Haut enjoyed exceptional visibility. The Route des Belles‑Histoires invites you to get in touch with the heritage that inspired Claude‑Henri Grignon’s work.