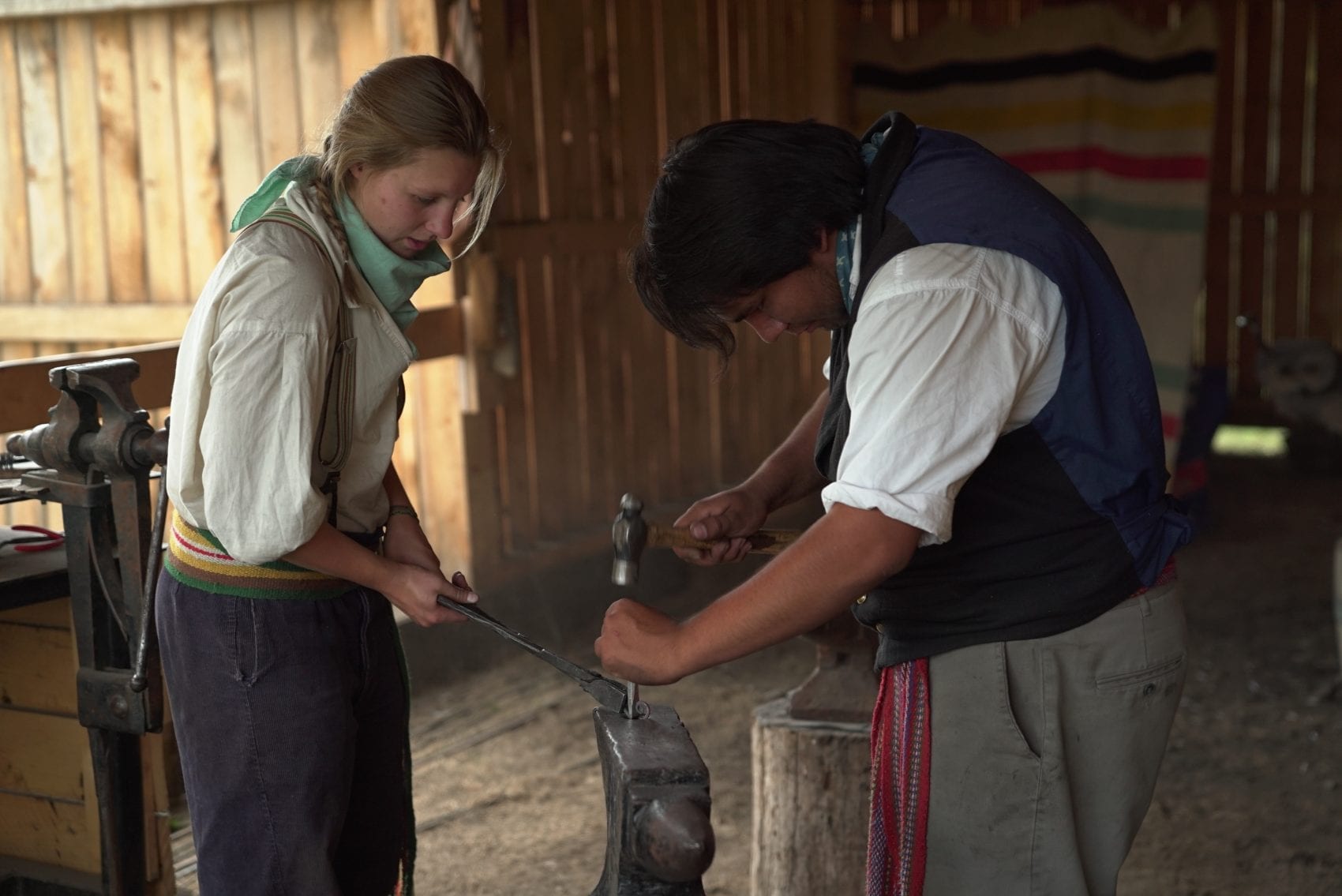 Rocky Mountain House’s reconstructed fur trading post is located on the shores of the North Saskatchewan River, about 100 kilometres east of the Rocky Mountains. It was the last post in the Prairies before traders had to cross the mountains to continue westward. The site was home to four forts in succession, and was declared a national historic site in 1926 because the great explorer and cartographer David Thompson lived there, together with a number of French-Canadian, Métis and British employees. The interpretive program presents the Indigenous world of the eight nations that used to trade at Rocky Mountain House and the living conditions of the European workers who lived there in the 19th century. Indigenous and Métis expertise workshops are available. Visitors can also listen to storytellers, watch artisans at work, camp on site in Indigenous or Métis fashion, or simply take in the visitor centre’s informative exhibit. A peaceful trail through this protected natural area leads to the remains of the four original forts.

David Thompson and his French-speaking companions

For many English Canadians, David Thompson is a hero. This tireless, gifted man travelled through almost all of Canada between 1797 and 1812, leaving behind a considerable cartographic legacy and a commercially respectable record. His job was to develop the fur trade for the North West Company, which was based in Montreal. But the company also gave him a number of exploration and mapping assignments, which he carried out brilliantly. A large number of visitors come to Rocky Mountain House especially to follow in the footsteps of this great explorer. The puppet show that recaps his life is one of the most popular attractions at the site.

David Thompson spent several months at Rocky Mountain House between 1801 and 1811, before his famous crossing of the Rockies to the Pacific Ocean in 1811, which opened the main trade route for the fur trade through the Rockies via the Columbia River. During his travels, Thompson spoke in French with seasoned French-Canadian and Métis voyageurs who contributed to his success, since the North West Company hired mainly Francophones. He wrote about them as follows: “Everywhere Indians, friends or enemies spoke of the French-Canadians as a race of brave men whose conduct was always wise and virile. Michel Bourdeaux and Augustin Quenneville, two of my companions, were among them. Their loyalty and their word could be relied on until death. They were all renowned snipers, which is why, during skirmishes, they always became the first target of the Indians, who feared them terribly.”

When Thompson first went down the Columbia River in 1807 and founded the Kootenay House post, he was accompanied by four French-Canadians: Moussau, Lussier, la Combe and Beaulieu – the latter being described as a loyal employee. In the winter of 1810-1811, Joseph Côté was one of the three people who crossed the Athabasca Pass and wintered with Thompson in a rudimentary cabin, then accompanied him to the Pacific. Michel Boulard, whom Thompson called a connoisseur of Indian affairs, as well as Pierre Pareil and René Valade, completed the group of seven voyageurs who accompanied Thompson to the end of this historic expedition.

Rocky Mountain House recognizes the central role played by French-Canadians and Francophone Métis in the fur trade during the Thompson era, but it takes the soul of an explorer to discover in historians’ recent work the full importance of their contribution.

At Rocky Mountain House, Parks Canada also highlights the presence of many different cultures at these trading posts founded simultaneously by the North West Company and the Hudson’s Bay Company in 1799 (the Hudson’s Bay Company fort was called Acton House). The site was permanently abandoned in 1875. Canadian Francophones, French-speaking Métis, British born in the United Kingdom and Anglophones born in Canada all worked there at the same time, at the two forts of the rival companies, where eight different First Nations bartered, especially for iron objects, some of which are on display today at the site’s forge: the Peigan, the Cree, the Gros Ventre, the Blood, the Stoney, the Blackfeet, the Sarcee, and the Kootenay.

The Rocky Mountain House exhibits and events reflect this cultural diversity. Special attention is given to the Métis nation, born of the fur traders and voyageurs who, in the West, were all men. Some of them married Indigenous women, and their Métis children shared a mixture of European and Indigenous culture, which they passed on from generation to generation. The Métis workshops and the Métis tents on the site attest to that reality. On the other hand, the North West Company Francophones’ familiarity with their Indigenous trading partners is a good reflection of the culture of Canadian Francophones, who were experts in travelling by birch bark canoe. They had borrowed that mode of transportation from the Indigenous peoples. By comparison, the cumbersome York boats used by the British-born employees of the Hudson’s Bay Company clearly show the British attachment to their cultural background, even though those boats put them at a disadvantage on Canada’s waterways compared with the lighter, faster birch bark canoes that were used by their competitors. Both types of craft are exhibited at Rocky Mountain House, which has the advantage of being located in a natural environment similar to that in which the fur traders and voyageurs lived.