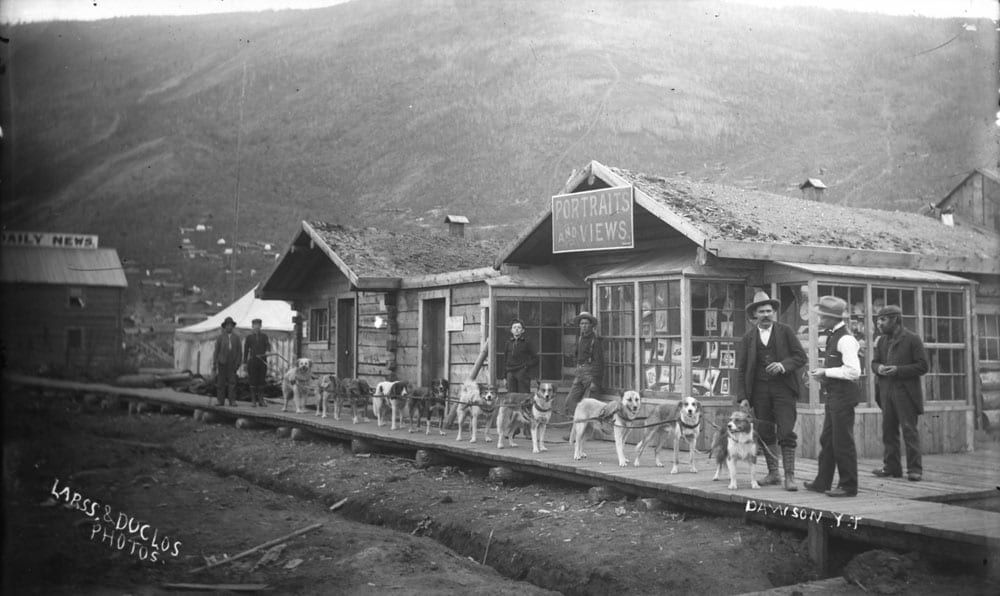 The Klondike Gold Rush is one of the best-known chapters in contemporary Canadian history, and certainly the most famous in Yukon history. Each year, thousands of tourists descend on Dawson City to trace the gold prospectors’ steps. Parks Canada interpreters guide them through the Dawson Historical Complex, composed of about twenty preserved period buildings, where they are immersed in the fever that rocked this town between 1897 and 1900. Places to visit include the Discovery Claimon Bonanza Creek, where it all started, and Dredge No. 4, one of the massive machines that replaced the amateur gold seekers after 1900. There is also the S.S. Keno, one of the paddle steamers that plied the Yukon River. More athletic types may wish to hike the arduous Chilkoot Trail, which prospectors took to reach the Klondike River. The popularity of this valued heritage site attests to the continued fascination with the Klondike Gold Rush.

Located 500 kilometres northwest of Whitehorse, Yukon’s capital, Dawson City is a small community of some 1,300 residents, whose numbers swelled to about 30,000 during the Gold Rush. The town was dubbed the “Paris of the North” for its wealth, but the boom was short-lived. The Klondike’s rich gold veins were soon depleted and the discovery of large deposits to the north in Alaska sparked an exodus of miners toward this new Eldorado. Dawson’s decline was almost as fast as its rise. The period that continues to capture imaginations lasted only from 1897 to 1900.

Within a rectangle four streets long by four wide in the town centre are the twenty or so heritage buildings that make up the Dawson Historical Complex National Historic Site. All have been partially or fully restored by Parks Canada, with some housing exhibits and service outlets. The complex reflects the town’s original character and diversity, its northern remoteness and its long-standing connection to mining. Through the shops, saloon, theatre hall, post office, forge, funeral home, courthouse and homes in this historic core, Parks Canada’s interpreters bring to life the crazy years of the Gold Rush. The S.S. Keno, an old river steamer now berthed opposite the town centre, is a reminder of the importance of this form of transportation on the Yukon River. There are also a number of exhibits at the Dawson City Museum, housed in the fully restored Territorial Administration Building, itself a National Historic Site.

Émilie Tremblay and the Franco-Yukon heritage

Franco-Yukon heritage dating from the gold rush is not very evident, even though an estimated 10% of gold seekers who came to the Klondike were Francophones. Other than letters from some of these prospectors published in a book by Jeanne Pomerleauentitled Les chercheurs d’or : des Canadiens français épris de richesse et d’aventure, the most visible element today is the shop opened by Émilie Tremblay in Dawson City in 1913. “Mme Tremblay’s Store”, as the sign on the building still reads, is part of the Dawson Historical Complex. Attractive and functional, the two-storey wood-frame shop was built in 1899 and evokes the gold rush era due to its location on a busy street, between two iconic buildings from the same period: the Palace Grand Theatre and Diamond Tooth Gertie’s Gambling Hall. The shop’s heritage value also derives from its owner, Émilie Tremblay.

Émilie Tremblay, née Fortin, was born in 1872 Quebec’s Saguenay–Lac-Saint-Jean region. She arrived in the Yukon with her husband, Nolasque Tremblay, in 1894, becoming the first white woman to cross the dangerous Chilkoot Pass. The couple spent one winter in a rustic log cabin in Miller Creek. At Christmas, Émilie sent invitations written on birch bark to the dozen or so miners living nearby. With limited supplies but lots of gumption, she served a veritable feast: stuffed rabbit, roast caribou, boiled brown beans, King Oscar sardines, dried potatoes, butter, sourdough bread and plum pudding. The Yukoners never forgot this sumptuous Christmas banquet.

After three years spent visiting their respective families in the United States and Quebec, the Tremblays returned to the Yukon in the middle of the gold rush. They travelled from one claim to another but never struck it rich. Eventually, Émilie opened a ladies’ clothing store to make ends meet. A very courageous woman, she raised one of her nieces, was godmother to 25 children, and earned a reputation for her social engagement: she was the founder of the Ladies of the Golden North, president of the Yukon Women Pioneers and life-time member of the Daughters of the Empire. The many medals she was awarded for her good deeds were placed in the Saguenay museum in Quebec. The French-language school in Whitehorse is named after her.

Other Francophones and the Klondike Gold Rush

The part played by Francophones in the gold rush is not systematically included in the Parks Canada interpretive program, but the Association franco-yukonnaise has uncovered and documented a number of significant stories and facts and is working with Parks Canada to make the contribution of Francophones more visible.

The founder of Dawson City, Joseph Ladue (Ledoux), was a Franco-American born in New York State. Having settled in the Yukon a few years earlier, he was one of the first to learn of the gold strike in 1896. Rather than take up prospecting, he bought a 65-hectare parcel of land at the confluence of the Yukon and Klondike rivers, had it surveyed and, when the rush came, was able to sell lots for a big profit. He also owned a saw mill, a store and the town’s first saloon. He named the town on his land in honour of geologist George M. Dawson, who made the first maps of the Yukon.

Among those who struck it rich were several Francophones. Narcisse Picotte came to the Yukon in the late 1880s and was on board the boat carrying the first newly rich miners to Seattle in July 1897, an event that sparked the stampede to the Klondike. Picotte invested in a number of profitable claims, and became one of the first to bring mechanization to the pits. He hired several dozen French Canadians, and was eventually joined by his brothers Émile, Frank, Moïse, Napoléon and Wilfrid. Another Francophone, George Demers, invested his windfall in the Yukon Telephone Syndicate that would link Dawson to the rest of the world by telephone, thus contributing to the region’s long-term development.

Other Francophones made names for themselves outside the mining industry, like Joseph E. N. Duclos, who came to Dawson in 1898 and opened a photography studio. He took many photos during the gold rush that now have heritage significance. From 1898 to 1912, Calixte Aimé Dugas served as a judge of the Territorial Superior Court, the Yukon’s highest court. He also sat on the Territorial Council, managed day-to-day operations and supervised elections. As well, Dugas was an active defender of the rights of French-speaking Catholics and miners who, in the Yukon as in other parts of Canada at that time, were often discriminated against. Joseph Omer Lachapelle was a physician and surgeon at St. Mary’s Hospital in Dawson from 1898 until his death in 1927. He was also an entrepreneur, and earned a reputation for his commitment to social causes. Lachapelle was elected in the North Dawson riding in 1907. Gédéon Pépin arrived in the Yukon at the end of the gold rush, in 1901. A talented musician, he was the organist at St. Mary’s Catholic Church. He also founded and conducted Dawson’s first brass band, whose members included several of his children. From 1898 to 1945, the Sisters of St. Anne, whose motherhouse is in Montreal, founded and administered St. Mary’s Hospital and oversaw its expansion.

In 1901, when many of the fortune seekers had moved on to Alaska, Francophones accounted for one-quarter of Dawson’s population of 9,000.