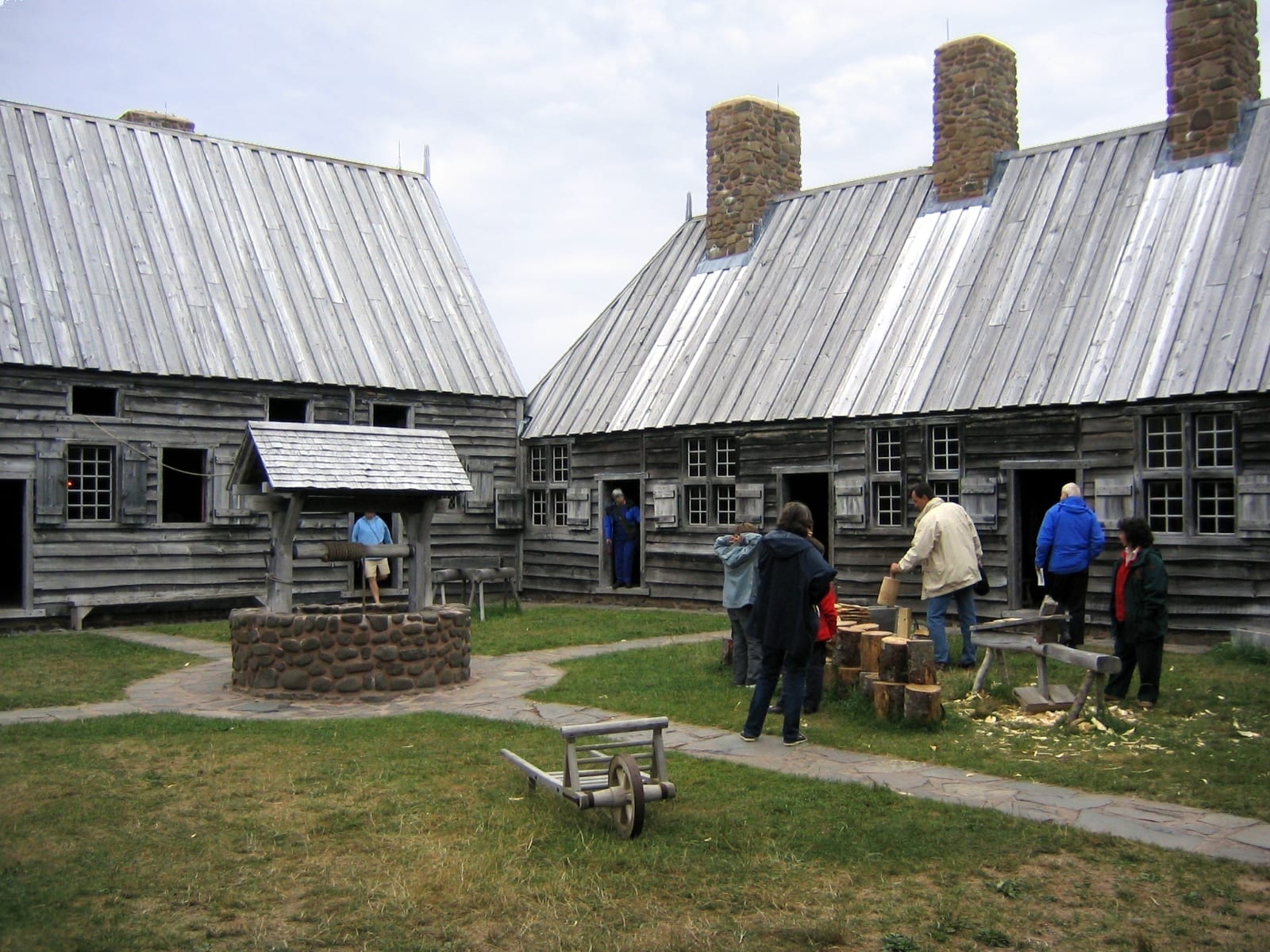 The reconstruction of the French pioneer “habitation” in Port-Royal, originally built in 1605 by the founders of Acadia, near Annapolis Royal in Nova Scotia, marks a turning point in heritage preservation in Canada. Planned in the 1920s and carried out in the 1930s, this restoration project would serve as a model for many others. In the Port-Royal Habitation, designated a National Historic Site in 1923, visitors can explore the compound designed by Champlain, painstakingly recreated using early 17thcentury building techniques, with period furnishings and interpretive information based on solid historical research. Visitors get a sense of what daily life was like for the hundred or so French colonists who lived there between 1605 and 1613 and the close ties they forged with their Mi’kmaq allies.

A visit to the Port-Royal Habitation

On entering this quadrangle of buildings surrounding an inner courtyard (much like the fortified farms of the same period), visitors step into a historic site of great importance. They see how French pioneers in North America lived in the early 17thcentury and the building techniques they used. They can learn more about the daily life of these hardy colonists by chatting with the costumed interpreters and touring the various buildings and rooms: the kitchen and dining room, the bakery, the gentlemen’s quarters, the carpentry shop, the apothecary, the forge and the trading room where furs and other goods were stored. They also have an opportunity to try out certain tools and sample food similar to what the pioneers ate. This collection of tangible and intangible heritage—replica tools, furnishings, weapons and clothing, authentic reconstructions, herbal medicines and knowledge passed on by the Mi’kmaq to the French—gives visitors a truly unique, immersive experience.

An inspiring model for heritage preservation and promotion

In 1924, after the Historic Sites and Monuments Board of Canada had erected a commemorative plaque on what was thought to be the site of the habitation, the year following its designation as a historic site, Harriette T. Richardson, an American who summered in the area, submitted to the Historical Association of Annapolis Royal a plan to rebuild the habitation and a fund-raising campaign. The project slowly made its way to Ottawa, where the Canadian Parks Service eventually got hold of it and started the ball rolling in 1938. The Service acquired the necessary land and supervised what was its first historic reconstruction project, for the purpose of tourism development and job creation.

Canadian artist Charles W. Jeffreys, best known as a historical illustrator, played a key role in ensuring the project’s historical credibility by conducting extensive research and drawing up meticulous plans from Champlain’s original sketches. The construction was carried out by a team of local craftsmen who still used the same building methods, numbering as many as there were in 1605. Heirloom seeds were even imported from France to make the gardens as authentic as possible, and replicas of 17thcentury furniture and other items were commissioned.

So the Port-Royal Habitation became a sort of school as well as a model for the preservation and promotion of Canadian heritage and history. No longer was it simply a question of erecting commemorative plaques and monuments; instead, the public now had access to on-site experiences and well-researched interpretive programs.

Although the first habitation at Port Royal was destroyed by Englishman Samuel Argall in 1613 and not rebuilt until modern times, the Acadians continued to live in the area, near the bay at the mouth of the Annapolis River. Their community also retained the same name: Port Royal. Because the French administrators and soldiers lived there, Port Royal was essentially the capital of Acadia, even though the population was more numerous and more prosperous to the east, in the area of Minas Basin and Grand-Pré. It was also near Port Royal in the 1630s that aboiteau farming began, a method of stopping high tides from inundating the fertile salt marshes of the Bay of Fundy, which the Acadians managed to reclaim and successfully cultivate until the Deportation of 1755.