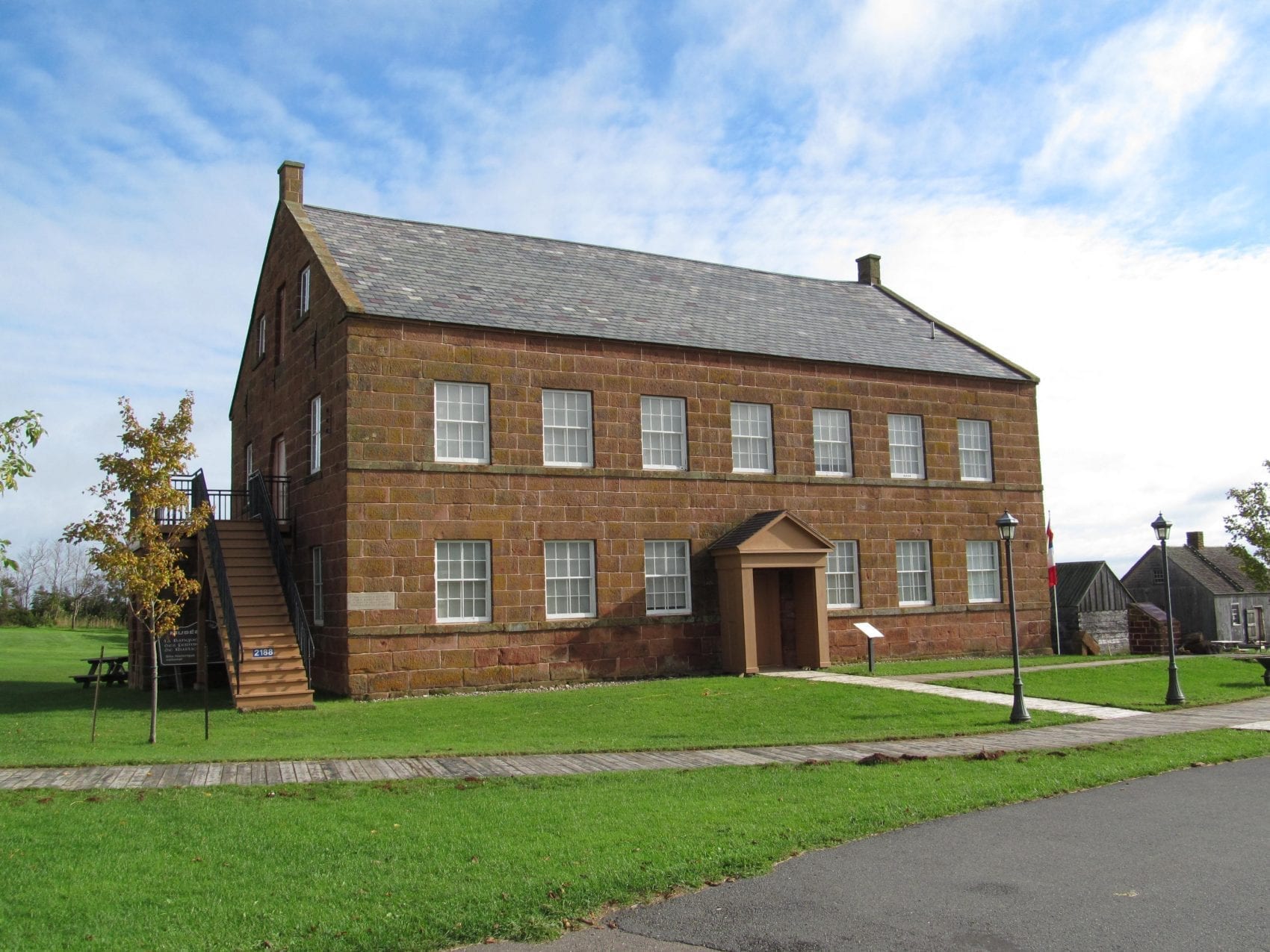 A visit to the spartan wood house built by Jean Doucet around 1772, and the solid, 19thcentury sandstone Farmers’ Bank of Rustico, both now fully restored, sheds light on a grassroots movement that began here and eventually had an impact on Canada’s economic history. In 1864, the first people’s cooperative bank opened in Rustico, precursor of the Quebec-based Caisses populaires Desjardins and other credit unions. The Doucet House reflects the poverty in which the local Acadians lived and helps explain why Father George-Antoine Belcourt founded the bank to alleviate his parishioners’ economic hardship. The museum now housed in the former bank shows how well his plan worked. The authentic restoration of these two buildings and their interpretive programs also attest to the engagement and drive of Rustico’s current residents.

The unique architecture of the sandstone Farmers’ Bank and the bank’s historic significance earned the building both of these accolades.

By the time he arrived in Rustico in 1859, the enterprising Quebec priest George-Antoine Belcourt had already proved his mettle in the Prairies, where he worked for almost 30 years, by encouraging the Métis to extricate themselves from the Hudson’s Bay Company’s monopoly. Struck by the lack of education and poverty of the 2,000 or so Acadians in his new parish, he founded the “Catholic Institute”, which held bi-weekly classes. It was during one of these teaching sessions that he first suggested creating a small people’s bank, similar to those that existed at the time in Germany and northern France. The locals were all in favour, and Belcourt applied to the Island’s colonial government for the necessary charter, which was granted in 1863. The bank began operating the following year.

Construction on the building designed by Father Belcourt began in 1863 and was completed in 1866. Every Sunday, parishioners would bring stones with them to church. The end result, totally distinct from all the wood buildings in the area, was intended to symbolize the solidity and prosperity of the cooperative bank Father Belcourt founded, which also served as a parish hall. The parishioners quickly learned to run the bank and it was soon profitable, while at the same time granting low-interest loans to local farmers.

By 1991, the building was in a terrible state of disrepair and a group of residents took on the task of saving it. They founded the non-profit Friends of the Farmers’ Bank of Rustico, then began the demanding process of raising funds to finance the restoration. Costly repairs were required to the exterior and interior, as well as the support structure. In 2000, the Friends hosted the official opening of the fully restored building, which now houses a museum that tells the captivating story of the Farmers’ Bank.

The Doucet House was built around 1772 on Grand-Père Point, across the bay from where it now sits. Jean Doucet was an influential Acadian on the Island. In 1785, he was authorized to officiate at marriages and baptisms throughout the Island, in the absence of a French-speaking priest. His house, made of hewn logs with dovetailed joints, was larger than most. It is the only remaining example of 18thcentury Acadian vernacular construction in Prince Edward Island. It illustrates the way of life of the Acadians who escaped the Deportation in the 1750s, who had lost everything and had to start all over again.

The house was moved to its present location in 1999. In 2003, with expert advice from Parks Canada, the house was restored to its original 18thcentury state, revealing its unique value. Tours of the house are given by interpreters, and several times in the summer traditional Acadian meals and concerts are held outdoors.

Father Belcourt ushered in many other improvements for the community during his ten years in Rustico, from 1859 to 1869. He founded a model school to train francophone teachers, who worked in all of the Island’s Acadian schools. He opened a library and secured money from French Emperor Napoleon III to buy books in French on a variety of topics. Concerned about the lack of farmland for the new generation to build on and work, he facilitated emigration to Quebec and New Brunswick, where free land was on offer. In 1866, he also bought (and regularly drove) the first steam-powered vehicle on the Island. This visionary man of the cloth helped the Rustico Acadians take control of their own affairs, improve their living conditions and become self-sufficient.

The French language in Rustico

French was the dominant language in Rustico when Father Belcourt arrived in 1859. Today, however, English is more commonly used by the descendants of the original Acadians. But there are sufficient numbers of “eligible” residents and sufficient interest in reconnecting with French that the community successfully lobbied for a French-language school. This school, along with the Acadian community centre Grand-Rustico, frequented by seniors who still speak French, will hopefully rekindle the use of French in the area and preserve this valuable Acadian legacy.