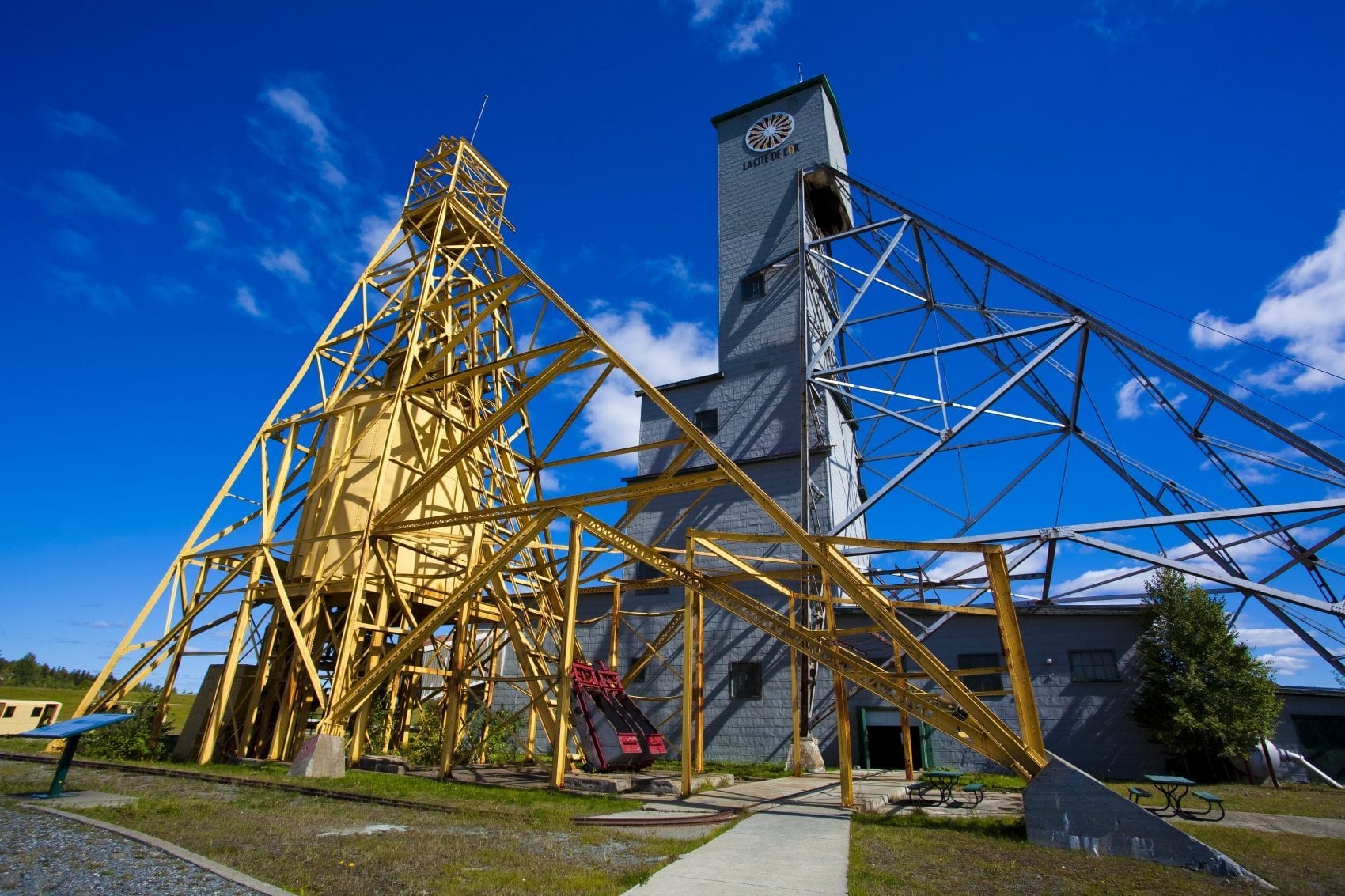 Today part of the city of Val-d’Or, Village-Minier-de-Bourlamaque was designated a heritage site by the Quebec Department of Culture and Communications in 1979 owing to, in particular, its exceptional conservation status and the significant role it played in Abitibi’s history. The still-inhabited site has 68 log homes built in 1934–1935 to house miners as well as some more luxurious accommodations for the top brass. A few industrial buildings from the Lamaque gold mine that shut down in 1985 still stand as well, including the hoist room, the analysis lab and the ore extraction headframes. The interactive exhibits on display at Cité de l’Or give visitors a glimpse into the daily life of a miner, explain how the mine worked and describe its history. The interpretation on offer allows visitors to experience what it felt like for miners to drill. More inquisitive minds can descend 90 metres below ground to a real-life gallery, where they can discover the machinery and tools miners used.

A compelling heritage in excellent shape

Village-Minier-de-Bourlamaque is a company village laid out according to a plan that makes rational use of space. All the homes were built the same to cut down on construction costs and provide similar accommodations to the some 150 employees involved in the mine’s revival in 1934–1935. However, these homes are not all identical. Built from either squared or round spruce logs, these single-storey log cabins came in smaller or larger sizes to accommodate mainly single men and some families. The roof was always red and came in different styles: “pyramid” or “four-point,” pitched, gabled, and with or without a dormer. Like in any good company village, the nice homes of the top brass were further away, on the top of a small hill, and were more spacious.

Lamaque Gold Mines Ltd., the subsidiary of a U.S. mining company, built this residential complex to boost the extraction of gold from this lode, discovered and exploited on a small scale since 1923. The company continued to own the village in case a new gold lode was found below the homes it was renting to the workers in order to retain full control over the site. Its maintenance schedule was meant to preserve these homes and to ensure that everything stayed true to the initial layout plan.

The Chez nous à Bourlamaque and De l’or plein les veines exhibits—an interpretation circuit of the mining village with an audio guide, a GPS quest and the chance to visit a real underground gallery—immerse visitors in all the aspects of the operations of this prolific mid‑20th‑century gold mine. This concept has won Cité de l’Or many regional and national awards since the site opened in 1995.

Up until 1960, Lamaque Gold Mines played a crucial role in preserving this important piece of industrial heritage, but when the company expressed an interest in selling part of its mining village, the residents of Bourlamaque rallied together. Municipal council decreed standards for the repair, alteration and potential expansion of these log homes. In 1973, when the company made another attempt to sell, the Chamber of Commerce and the Société historique de Val-d’Or, of which Bourlamaque was now a part, joined forces to preserve these valuable physical remnants of the founding era of Abitibi and the memory of the people, events and lifestyles associated with it, given that nearly every trace of that era had already disappeared. The Quebec Department of Culture and Communications supported their efforts by designating the site in 1979. Val-d’Or and Abitibi organizations then came up with various presentation scenarios, the top one being Cité de l’Or, which opened in 1995.

A short history of Abitibi

Amerindians and some trappers and fur traders of European origin lived in the Abitibi area until the construction of the second Canadian railway, the National Transcontinental Railway (later Canadian National), completed in 1914. Different settlers then settled near the railway, specifically in the municipalities of Amos and La Sarre, founded in 1914 and 1917. A second wave populated Abitibi at the beginning of the Great Depression in the 1930s. The governments of Quebec and Canada implemented settlement policies at the time, and thousands of often jobless city dwellers took advantage of the free land the governments offered them in Abitibi. They settled in the region and devoted themselves to either farming or forestry work. However, the agricultural potential of this northern region was limited, and the new settlers who were starting from scratch had a hard life. The discovery and development of gold and copper mines along the Cadillac Fault, in the heart of Abitibi, stimulated the economy and led to the creation of new urban hubs in Rouyn‑Noranda in 1926 and Val-d’Or in 1934. To this day, these are major cities in Abitibi. The emergence of the mining sector was therefore a turning point in the development of Abitibi, whose economy still depends on the mining and forest industries.