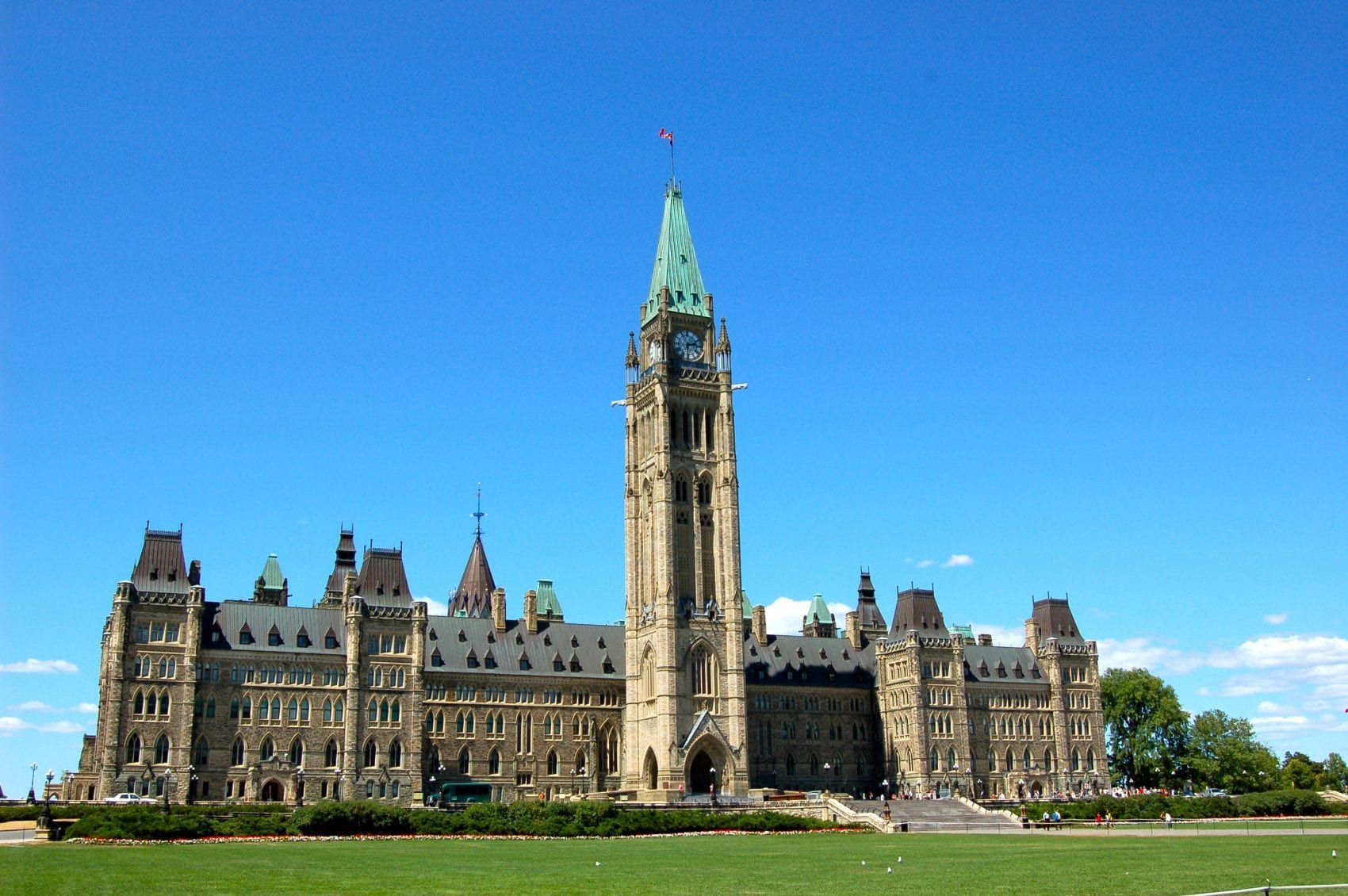 This magnificent Gothic Revival building, located in the heart of the City of Ottawa, is the seat of Canada’s federal government. Designated a Canadian National Historic Site on Parliament Hill, it is built on landscaped grounds overlooking the Ottawa River. Many great French‑Canadian politicians have made a name for themselves there since 1867, making their mark on the country’s history. Talented Francophone artisans also participated in the construction and ornamentation of the Parliament buildings, through majestic architectural sculptures. To visit Parliament in Ottawa is to discover the legacy of all these builders.

This architectural complex is one of the most significant examples of the Gothic Revival style in Canada. It was built between 1859 and 1866 to house the government of the British colony of Canada. It was finally ready when Canada became a nation in its own right on July 1, 1867. In February 1916, however, a terrible fire destroyed most of it. Architects John Pearson and Jean Omer Marchand, from Toronto and Montreal respectively, redesigned the current building in the same style. The reconstruction was finished in 1922 and the addition of the central Peace Tower was completed in 1927.

The House of Commons and the Senate are in the Centre Block. Offices of the members of Parliament are housed in the Centre, East and West Blocks. The free tour of Centre Block focuses on history, political functions, and works of art. The public gallery enables visitors to attend proceedings in the Senate and House of Commons. It is also possible to visit the East Block—including the office of George-Étienne Cartier, one of the Fathers of Confederation.

Francophones in the federal Parliament

George-Étienne Cartier, Co‑Premier of Canada East with John A. Macdonald in the Union Government (1857–1862), led the Confederation movement. He then served as Minister of Militia and Defence (1867–1872) under the government of Macdonald, who was Canada’s first Prime Minister (1867–1896). His office, which was recently restored, provides an opportunity to discover the parliamentary life of the time. His bronze statue, the first commemorative monument on the Hill (1885), honours him as a Father of Confederation. The work was created by Louis-Philippe Hébert, who went on to do make other statues. The first French‑Canadian elected Prime Minister of Canada was Wilfrid Laurier (1896–1911). He brought Alberta and Saskatchewan into Confederation in 1905. He was portrayed by Joseph Émile Brunet, a renowned figurative sculptor originally from Montreal. Louis Saint‑Laurent also held the office of Prime Minister (1948–1957). Since then, the French language has gained more prominence in Parliament. Since 1968, prime ministers have been bilingual or native French‑speakers. Five of them were elected from Quebec, the only province with a Francophone majority: Pierre-Elliot Trudeau (1968–1979 and 1980–1984), Brian Mulroney (1984–1993), Jean Chrétien (1993–2003), Paul Martin (2003–2006) and Justin Trudeau (2015). The majority of Francophone MPs and ministers also come from Quebec, while some 20 ridings—mainly in New Brunswick and Ontario—regularly send Francophone MPs to Ottawa. Several dozen MPs from all regions of the country now have a good knowledge of French, because today it is an asset for Canadian politicians to speak both of the country’s official languages.

In the Centre Block, the Salon de la Francophonie commemorates Canada’s membership in La Francophonie. The Salon was created in 1993 with support from the Canadian chapter of the International Assembly of French‑Speaking Parliamentarians. It houses the portraits of six Kings of France from the era of New France and a bronze bust of its founder, Samuel de Champlain, and of Raoul Dandurand, Speaker of the Senate (1905–1909). The 30-metre fresco “History of Canada,” located in the House of Commons foyer, depicts Champlain with an Indigenous guide, in an Indiana limestone bas-relief.

These heritage works showcase the expertise of Francophone sculptors. Cléophas Soucy, born in Quebec City in 1879, was the first Dominion Sculptor in Parliament (from 1919 to 1950). He directed up to eleven sculptors. He carved the formidable sculptures at the grand entrance to the Centre Block, the limestone altar in the Memorial Chapel, and stone high reliefs. Before his death, he prepared the models for an enormous series of limestone gables that crown the ogive arches in Confederation Hall, one of the most important ceremonial sites.

The House of Commons is decorated with wooden carvings made by his brother, Elzéar Soucy, and his nephew, Donat. His talent is reflected in the impressive oak door, along with the mullions and finials dividing the galleries and the two owls that overlook the press gallery. Maurice Joanisse was also the Dominion Sculptor (1993–2006), as well as the creator of a series of twelve high reliefs with his brother.

Beneath the arches of the Senate is housed the most important series of legal records in Canada. It contains the original laws of the Parliaments, stretching more than 150 linear metres. The Senate Records include institutional records that span over 550 linear metres. The library building, shown on Canadian banknotes, houses a marble bust of Étienne-Paschal Taché. He chaired the Quebec Conference in 1864, and defended the 72 resolutions that would lead to Confederation.

Recent legislative measures to promote French as an official language

Since the 1960s, the federal government has passed laws that have had a major impact on Canada’s Francophone communities. The most recent version of the Official Languages Act (passed in 1969 and amended in 1988 and 2005) commits the federal government and its institutions to taking positive measures to promote the vitality and development of official language minority communities. This legislation has made it possible to increase the number of jobs that require a functional knowledge of French. The federal government created the Office of the Commissioner of Official Languages to enforce this law.

The most important measure was undoubtedly the entrenchment of the Canadian Charter of Rights and Freedoms in the Constitution Act, in 1982. Sections 16, 17, 20 and 23 of the Charter guarantee various language rights, including the right to minority-language education, where numbers warrant. Several Supreme Court of Canada decisions have clarified the exact scope of these rights. Those decisions enabled a number of Francophone communities to establish and manage their own schools. Several other federal laws promote respect for both official languages, such as the Consumer Packaging and Labelling Act, the Immigration and Refugee Protection Act, and the Broadcasting Act, which regulates French and English content of the Canadian Broadcasting Corporation.

The Parliament of Canada has always been and continues to be a place of great importance for the French fact in this country. Every year on July 1, Canadians gather on Parliament Hill to celebrate Canada Day.