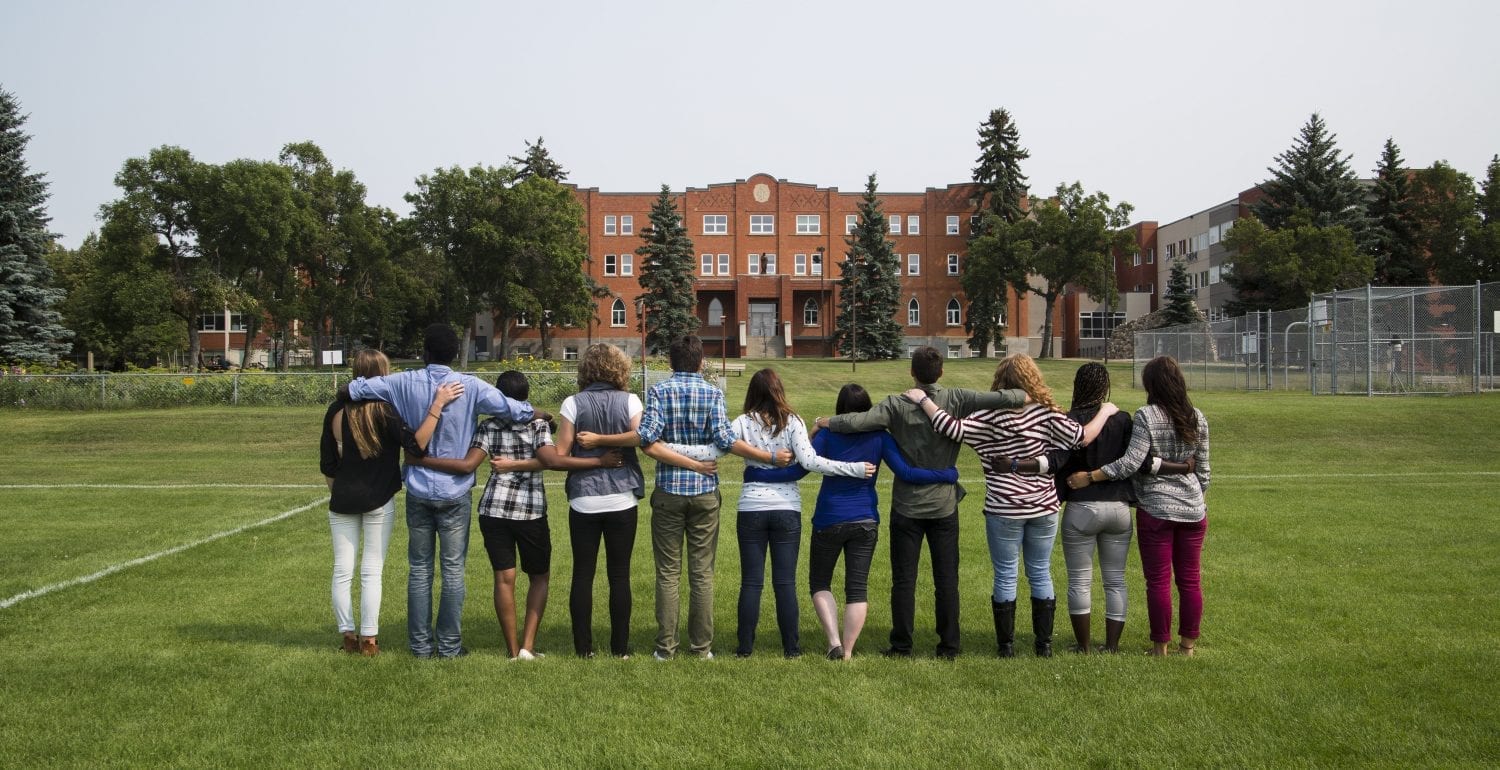 The Campus Saint-Jean is a pillar of Francophone education, research, and cultural life in Alberta. Its academic component, the Faculté Saint-Jean, its college component, the Centre collégial de l’Alberta, its Institut pour le patrimoine de la francophonie de l’Ouest, its Institut des études canadiennes, and the associated Société historique francophone de l’Alberta, make this institution a driver of development for Francophones in Alberta. Its leading role in training Francophone teachers has been recognized for decades, and it is even more important today, when the demand for qualified teachers for Francophone primary and secondary schools and French immersion schools is exploding in the western provinces. In addition, the Campus Saint-Jean is located in heart of the Francophone neighbourhood of Edmonton, across from the Cité francophone, which houses several Franco-Albertan organizations. It participates in the cultural promotion of the community, both through its internal programming and by renting out its premises for events and various activities.

The Institut pour le patrimoine de la francophonie de l’Ouest canadien (IPFOC), created in 2011 to recover, protect, synthesize and publish the historical and cultural heritage of Francophones in Western Canada, offers regular conferences and colloquia on the Franco-Albertan heritage and the French-Canadian experience. It has collected a rich variety of documentation, including recordings of popular songs, interviews with members of Alberta’s Francophone communities, the archives of the Oblates who have worked in the territory of what is today Alberta from the middle of the 19th century, and a remarkable collection of Francophone newspapers dating from the early 20th century. It has also published a history of Francophones in Alberta. In response to the interest that its activities raised, in 2012 the IPFOC established a new organization, the Société historique francophone de l’Alberta, to improve long-term planning for the vast field of work available to IPFOC researchers and to obtain assistance from volunteers.

Students inside the Pavillon McMahon

The some 800 students who study at Campus Saint-Jean also contribute to the development of the Bonny Doon neighbourhood, the new Francophone neighbourhood in Edmonton, where the Saint-Jean Juniorate was established in 1911. The Association des universitaires de la Faculté Saint-Jean is the heart of the institution’s Francophone student life. It organizes numerous cultural activities celebrating Francophone culture, including the Fête de la francophonie and the Festival hivernal, in addition to running several sport and cultural clubs and mentorship activities to facilitate the integration of foreign Francophones who arrive in Alberta. Students are also very active in the local and provincial Francophone community.

The Campus Saint-Jean is home to a Francophone student radio station that is heard by many residents of Edmonton. It provides a forum for artists on campus, in Edmonton, and elsewhere in the province. The first Gala albertain de la chanson and the first Gala interprovincial de la chanson were held at the Campus Saint-Jean and have taken place there for several years. Several student and community theatre troupes have also been established at the campus. Since 2002, the Lacerte pavillion has been renovated to house a Grand Salon, which is currently used for meetings of Francophone organizations that are not part of the university.

In February 2017, the dean of the institution requested authorization from the Alberta government to graduate twice as many education students, in order to respond to the lack of qualified Francophone teachers in Alberta. According to him, the 70 new graduates each year at the Faculté Saint-Jean are not sufficient to meet demand, because of what he called the “wave of Francophilia in the West.”

In 1961, the Collège Saint-Jean opened the École de pédagogie de Saint-Jean in partnership with the University of Alberta and Université Laval. Since then, the institution has become a leader in training Francophone teachers who are able to teach French in French, even though at the time, the use of French in the public education system was limited to one hour a day. In 1968, Alberta law finally allowed teachers to teach half of the day in French in primary schools, and in 1976 that proportion was raised to 80%. The role of the Faculté Saint-Jean in training masters students then became essential. By 1977, the Faculté Saint-Jean had become independent from the University of Alberta, and improved its training program for Francophone teachers, and the education program holds a central place within the Faculté to this day.

In 1908, at Pincher Creek in southern Alberta, the Oblate Fathers founded a Juniorate to train young men with a vocation for religious orders. As the region slowly developed, in 1911 the Oblates decided that it would be better to move the Juniorate to Edmonton, which was growing faster, to the land that is still occupied by the Campus Saint-Jean.

n the 1930s, the Saint-Jean Juniorate was one of the only private schools in Alberta where young boys could get a classical education in French that matched the standards issued by the government of Quebec at the time. In 1941, the Jesuit College in Edmonton closed its doors, and the Saint-Jean Juniorate replaced it, accepting young men who did not intend to join religious orders. In the late 1950s, the institution also began accepting girls. The Collège Saint-Jean’s excellent reputation extended to Quebec, which sent students there in the 1950s. Starting in 1964, and for several years thereafter, the Government of Quebec contributed financially to expand the facilities of the college.

In November 1970, the Collège Saint-Jean became the Collège universitaire Saint-Jean, affiliated with the University of Alberta, and in 1977 it became an independent faculty within the university, the Faculté Saint-Jean.

Between 1997 and 2002, several renovations and enlargements allowed the Faculté Saint-Jean to continue its development and confirm its reputation for excellence in higher education in French.