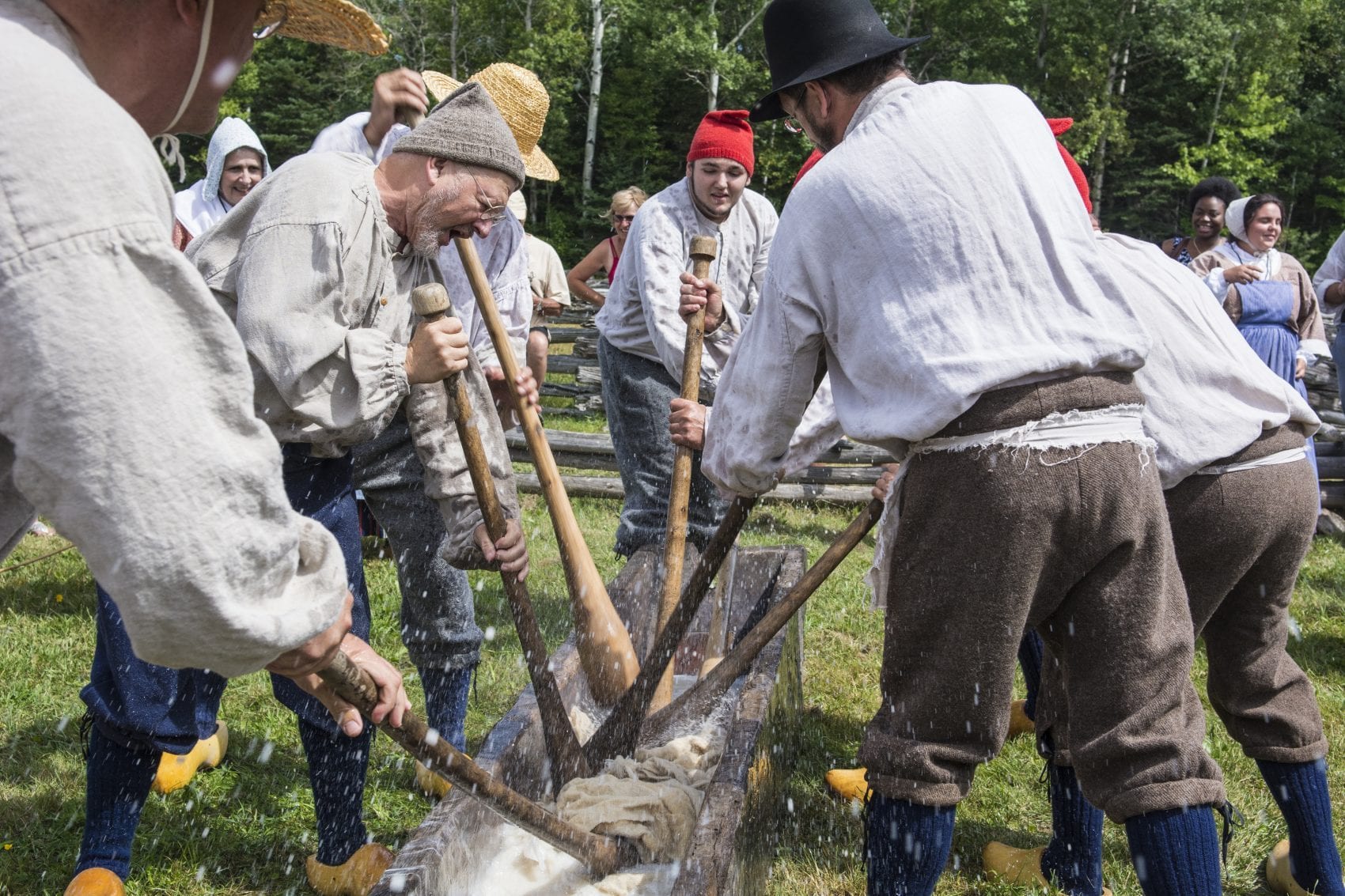 Located at the heart of the Acadian Peninsula, the marvelous Acadian Historic Village gives visitors a glimpse of the day-to-day lives of the people who lived and worked in the 40 authentic buildings on the site. Visitors are taken through several historical periods, from 1770 to 1949, accompanied by housewives cooking old-world recipes in an 18th century house, artisans demonstrating ancient know-how in a forge or newspaper office in the 19th century and an innkeeper welcoming customers to a 20th century hotel. The Acadian village provides a magical tour of Acadia’s history through the eyes of Acadians who re‑enact the past.

It takes at least four hours to tour this large village, which contains some 40 buildings. The entrance ticket is valid for two full days, since there are so many things to do and discover in the Acadian Historic Village of Caraquet. The 40 performers in period costume make straw hats, soap and rope, spin flax, dye wool, split cedar shingles, shoe horses, print the village newspaper by hand, shape tin, knead dough, work wood, farm the fields and feed the animals, among other things. These are all things that visitors can watch and even learn to do in this village. As they go about their business, the costumed actors chat with visitors, tell them their stories and talk about the crafts that they have mastered.

To get more out of their stay, visitors can even take rooms at the Château Albert Hotel, reproduced from original plans from 1907, to enjoy an in-depth “period experience” and have the privilege of staying on the site after hours.

Passing on the know-how of Acadian artisans

Teams of professionals carried out extensive research on food, clothing and traditional trades in order to train the interpreters who guide visitors. Artisans who are still familiar with the old methods also helped to pass on their knowledge. Now, experienced guides can teach the trades and transmit their know-how to new recruits in the same way that masters trained apprentices in the past. In this spirit, a restaurant in one of the ancestral homes offers traditional Acadian meals.

The same attention to detail was paid to the choice of the buildings on the site. They were transported and rebuilt in their environment and according to their original function, to reflect the regional diversity of New Brunswick’s Acadian culture and its evolution.

To preserve the true historical charm that the designers ardently wanted to give to the village, they built it some distance from existing cities and towns. They also made sure to maximize the effect of being transported to the past. A local resident even supervised the rehabilitation of the system of dykes and aboiteaux that enabled the original inhabitants to drain the marshes of the Rivière du Nord, which borders the site, using traditional techniques he learned from his father.

Officially announced in 1974, the Acadian Historic Village, which opened in 1977, included 18 developments and major buildings. Erecting buildings covering the period from 1770 to 1890 continued for three more years. Dozens of craftsmen with traditional skills restored the buildings, while a team of historians, conservators and heritage specialists carried out research and training. At the end of the 1990s, about 100 people worked to incorporate the period from 1900 to 1949, which is separated from the older period by a brook and a covered bridge.

The village employs an average of 160 people during the summer, 80 of whom are guides and actors in period costume, divided in two work teams. Since the opening, more than 3,000 people have worked in the village and over 3.5 million people have visited it. The Acadian Historic Village of Caraquet has earned many tourism and heritage promotion awards, including the Attractions Canada Award.