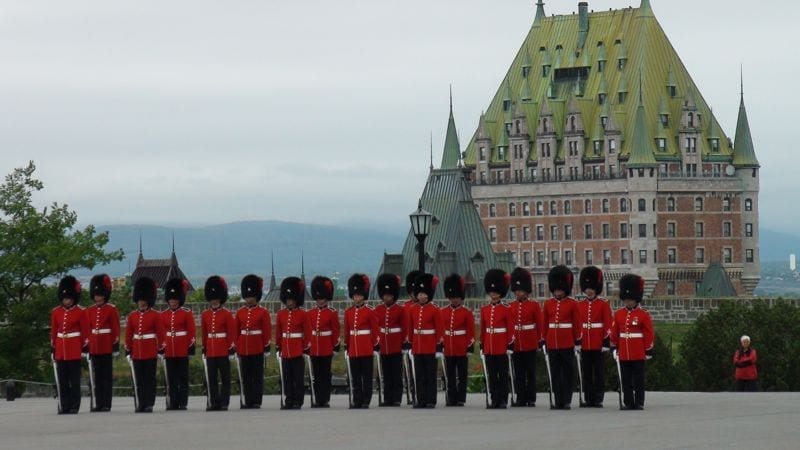 Built from 1820 to 1831, the Citadelle of Quebec is North America’s only historic fortress that is still militarily active. It is also the largest military installation of its kind on the continent. It serves at the headquarters of the Canadian Forces’ sole French-language regular force infantry regiment, the Royal 22eRégiment. It is the only Canadian military base that is open to visitors, and definitely the only base where the regimental mascot, Batisse the goat, attends the changing of the guard as officers and soldiers, decked out in their scarlet regimental dress uniforms and bearskin hats, perform drill movements for the public to the music of the regimental band. This is one of the many traditions that makes this National Historic Site of Canada a Canadian military heritage gem, fully vibrant and beloved by its many visitors.

At the beginning of the First World War, Canada’s military command agreed to group French Canadians within the same unit so that they could serve the country in their own language. In October 1914, it created the entirely Francophone 22nd (French Canadian) Battalion, which fought in a number of engagements throughout the war. This battalion fought with distinction on many occasions and earned its prestige in difficult conditions. Disbanded in 1919, it was recreated the following year as the 22nd Regiment. In 1921, the English King George V added the designation “Royal” in recognition of the regiment’s military accomplishments during the Great War.

The Royal 22eRégiment (R22eR) also distinguished itself in the Second World War, the Korean War and in various theatres as a peacekeeping force or combat unit, particularly in in Cyprus, the Former Yugoslavia and Afghanistan. This long list of achievements has strongly established a number of traditions and created an important heritage along with the Citadelle of Quebec, which has served as the R22eR headquarters since 1920.

“Je me souviens” is the motto of the R22eR and the Province of Quebec. For Régiment soldiers and officers, the motto urges them to remember the past, have faith in the future and familiarize themselves with the Régiment’s history, symbols, traditions and organization in order to keep the traditions alive. The most solemn of these is undoubtedly the memory book, which lists the names of all the men and women of the R22eRwho died in service. Every day, theDuty Sergeant turns a page of the book and reads each name aloud. Every soldier on duty is also required to salute as a sign of respect when they pass the wooden cross that was raised on Vimy Ridge in France in April 1917, after a long and bloody battle.

The changing of the guard is the R22eR’s best known tradition. Inspired by the changing of the guard at Buckingham Palace in London, this ceremony has been performed for the public on the Citadelle’s parade grounds every day during the summer since 1928 (except during the Second World War). The presence of the goat, named Batisse in 1955, also comes from a British tradition. It was originally a gift from the Shah of Persia to Queen Victoria in 1884. She decreed that the pair of goats she had received from the Shah should become the mascot of her regiment. The R22eR adopted this tradition when it formed an alliance with the British Army’s Royal Welch Fusiliers in the late1920s.

Visitors can learn more about the Régiment’s many other symbols, including its flag, banner (featuring a beaver), weapons, uniforms and the medals awarded to its members at the Museum of the Royal 22e Régiment located in the Citadelle. The museum opened in 1950, and was renovated and expanded in 2015, along with its exhibits.

The Citadelle of Quebec

Built by the British according to fortification plans designed by the celebrated French engineer Sébastien Le Prestre de Vauban, the Citadelle of Quebec is comprised of a star-shaped stone protective wall and four bastions. With its barracks, hangers, powder magazines, armory and even a hospital, the Citadelle would have been self-sufficient in the event of a siege, but it was never attacked. Its location and size earned it the nickname America’s Gibraltar. The Citadelle is located atop Cap Diamant, overlooking the city and the St. Lawrence River. The French had already erected bastions in this highly strategic location. This is why two Citadelle buildings date back to the French Regime: the Cap Diamant Redoubt and the powder magazine, built in 1693 and 1750, respectively.

The Citadelle’s main entrance is the only authenticate gate that is still exists in Quebec City since its construction in 1828. It has also preserved its zigzagging baffle that crosses the glacis (the long slope of land) that protects the exterior stone wall, forming a defensive ditch (which serves today as a traffic corridor) with the interior stone wall of the actual fortress. The virtually intact condition of this defensive system and the fact that it was integrated in the fortifications that surrounded the entire city give the Citadelle and the entirety of Quebec City’s fortifications exceptional heritage value. These were weighty considerations when Old Québec was placed on UNESCO’s list of World Heritage Sites in 1985. The Citadelle is open to the public and highlights the traditions of the R22eR, which are equally exceptional. Both are a must see!