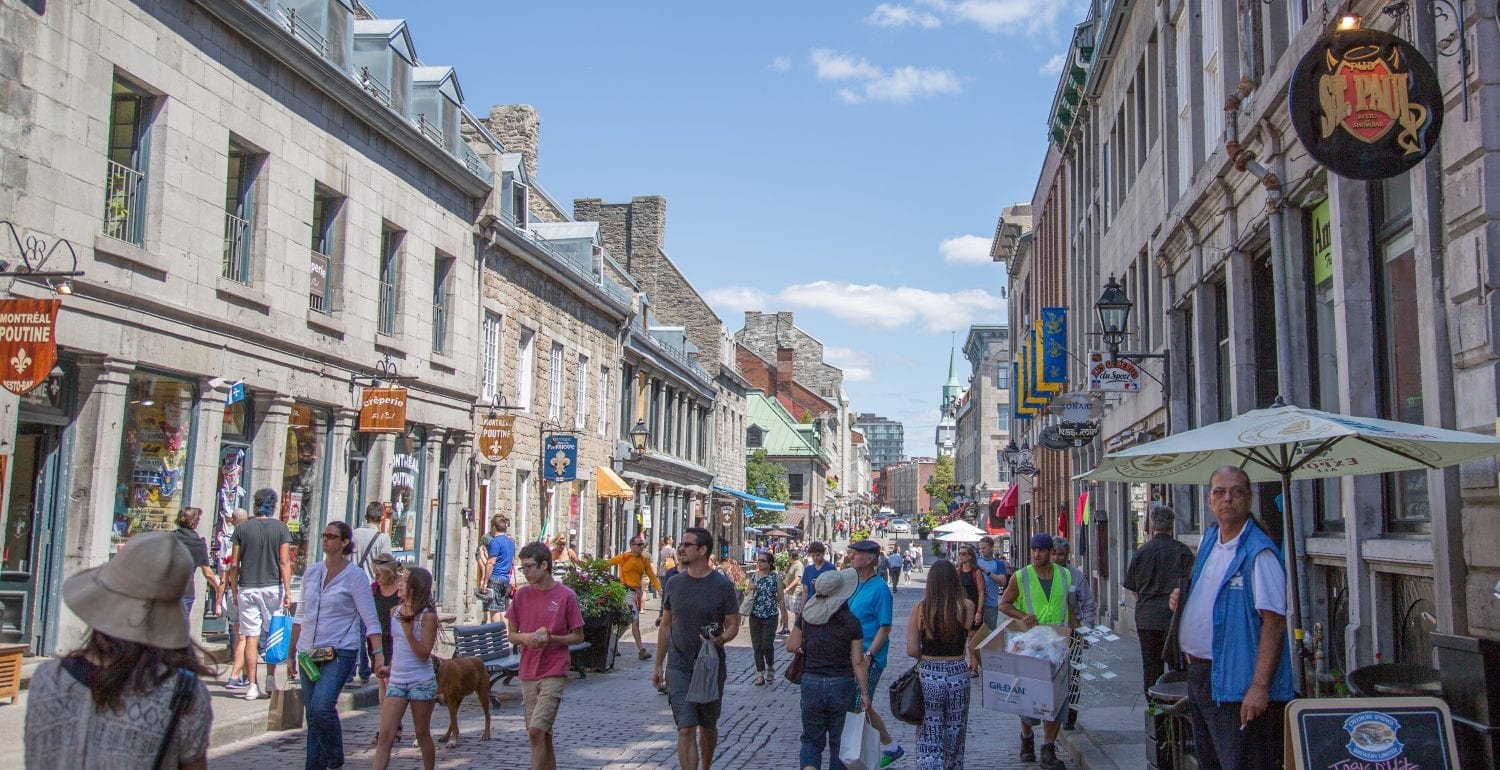 Old Montreal (“Vieux-Montréal” in French) is one of the oldest areas of settlement in North America. In 1642, when fifty or so French pioneers built Ville-Marie, the Indians no longer inhabited the area. The name chosen by founders Paul de Chomedey de Maisonneuve and Jeanne Mance, “Ville-Marie”, would not win out over the name Jacques Cartier had given the mountain dominating the island when he came in 1535: Mont Réal (“réal” being archaic French for “royal”). Montreal rapidly grew into a thriving crossroads for the fur trade, and into a commercial hub. For 200 years, the upper and upper-middle classes lived and worked in Old Montreal. This heritage site, with its wealth of listed buildings, restored and revitalized since the 1960s, retains the French character and feel of the 18thand 19thcenturies. Its many shops and attractions make it one of Montreal’s most welcoming, unique and vibrant districts.

A cradle of French Canada

A stroll around the Old Montreal heritage site gives visitors the impression they have travelled back to an earlier century on a different continent. Every year, hundreds of thousands of tourists explore the streets and buildings that bear witness to the evolution of the historic centre of Montreal, from the era of New France to the turn of the 20thcentury. A number of monuments pay tribute to the founders: Paul de Chomedey de Maisonneuve, Jeanne Mance, the fifty pioneers that accompanied them, and Marguerite Bourgeoys.

Opened in 1992 to coincide with the 350thanniversary of the founding of Montreal, the Musée Pointe-à-Callières gives direct access to archeological ruins dating back to the first decades of settlement on the very spot where the city was born. The site on which the museum sits has been designated a Quebec national historic and archeological site. In 2017, to commemorate the city’s 375thanniversary, the museum unveiled its seventh pavilion and the new permanent exhibit it houses, Where Montréal Began. The exhibit showcases artifacts and ruins uncovered by archeological digs conducted on the site from 2002 to 2015. Evidence of Amerindian occupation dating back 4,000 years and many traces of the first French settlers are also visible beneath the museum.

Another exhibit is dedicated to the Great Peace of Montreal, signed in 1701, and highlights commemorations held in 2001 on the very site where hundreds of representatives of First Nations that had allied with the French gathered, right here in Old Montreal.

The district’s 200 or so 19th-century buildings, many of which have heritage designations, form a dense and cohesive urban fabric that gives Old Montreal its unique historic feel.

The Saint-Sulpice Seminary, whose central section was built between 1684 and 1687, the old General Hospital, also known as the Grey Nuns’ Hospital, and Château Ramezay all date from the New France era. The many private homes built at the start of the 19thcentury—including Papineau House, La Minerve House, Marie-Pierre Viger House and Maison à l’Enseigne-du-Patriote [house with the patriot’s sign]—illustrate the desirability among the well-to-do of a residence in what was then the centre of Montreal. Dating to the latter half of the 19thcentury, the buildings that housed the Bank of Montreal and Banque du Peuple, Canada Life and Great Scottish Life Insurance attest to Montreal’s development into a financial centre. The number of warehouses and commercial buildings, all architecturally striking, also multiplied in the 1860s and 1870s, and are now reminders that for a long time, Old Montreal was the city’s commercial centre. Two exceptional buildings, Notre-Dame Basilica and Bonsecours Market, are of such interest that they merit a separate article.

From Hochelaga to Ville-Marie: the birth of Montreal

When Jacques Cartier stopped at the Iroquois village of Hochelaga in 1535, he found it to be prosperous and well organized. But the site was uninhabited when Samuel de Champlain arrived in 1611, and was still vacant in 1642 when Paul de Chomedey de Maisonneuve and Jeanne Mance founded Ville-Marie with the intent of converting the Indians to Christianity and building a new society.

Owing to its strategic location at the confluence of several waterways, Montreal soon became the main crossroads for the fur trade. To defend against frequent attacks by the Iroquois, the governor of Montreal had the town enclosed in a wooden palisade, built between 1685 and 1689. The Great Peace of Montreal in 1701 marked the beginning of a long period of peace that allowed Montreal to start expanding. Soon after, however, stone fortifications were built between 1717 and 1738 to defend against the British threat, making Montreal the first fortified town in North America.

These stone fortifications were demolished between 1804 and 1817, restoring direct access to the St. Lawrence River. An economic boom began in Montreal, fuelled by an influx of British capital, the development of the port and the city’s important commercial role. The Customs House, built in the late 1830s on a public square called Place Royale, attests to the city’s role as an entry port for immigrants. In the latter half of the 19thcentury, industrialization transformed Montreal into a bustling city, a financial centre and hub for Canadian maritime and rail transportation. During this period, many innovative multi-storey office “towers” were built, cementing Montreal’s place as Canada’s first metropolis.

Old Montreal and its vibrant heritage

The name “Old Montreal” was coined at the turn of the 20thcentury, when the concepts of conservation, preservation and commemoration began to attract interest. Today, restored Old Montreal is a particularly lively district, full of boutiques, restaurants and activities thronging with tourists and residents alike.