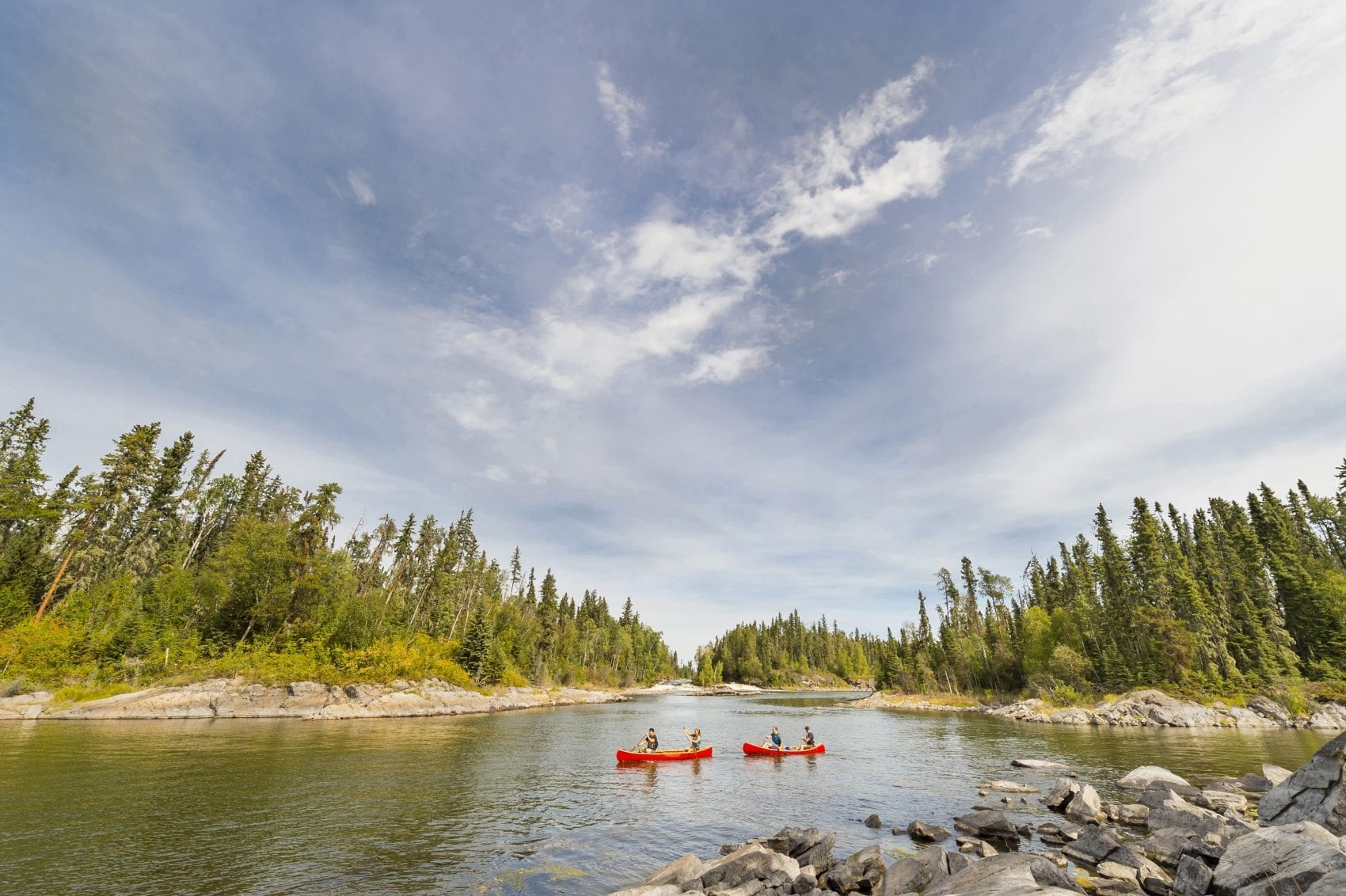 On the Churchill River in Northern Saskatchewan, keen canoeists can live an experience much like that of the old voyageurs in the days of the fur trade from 1776 to the mid-1800s. The French-Canadian and French-speaking Métis voyageurs who paddled up and down this major waterway gave French names to hundreds of rapids, portages, islands, lakes and rivers, many of them borrowed from native names. Some of these names persisted, and others have been rediscovered. A long stretch of the river, from Lac à-la-Crosse to Frog Portage, has been nominated for designation under the Canadian Heritage River System. Outdoor and heritage enthusiasts can travel this waterway, passing by Snake Rapids, Portage des Épingles [pin portage], Rivière La truite [trout river] and Lac de la Queue dépouillée [bare-tail lake], and receive an official Saskatchewan Voyageur Certificate as a memento of their trip.

The rugged wilderness in this part of North-Central Saskatchewan has remained virtually unchanged since the era of the voyageurs. The section of the Churchill River regularly travelled by the voyageurs—more than 500 kilometres long—is still in the heart of unspoilt nature. A few hours’ drive north of the city of Prince Albert, Lac La Ronge Provincial Park has more than thirty canoe and kayak routes, many of which follow old voyageur routes. The Saskatchewan Ministry of Environment publishes booklets documenting more than fifty routes varying in length and degree of difficulty. It also awards a Voyageur Certificate to modern-day adventurers who prove themselves worthy successors to the hardy voyageurs of bygone days.AtMissinipe, 75 kilometres north of La Ronge, an outfitter offers guided excursions, training, maps and equipment rentals. Its employees have an in-depth knowledge of the Churchill River and its history.

Showcasing the cultural heritage of the fur trade voyageurs

In addition to developing a system of river canoe routes, identifying heritage voyageur routes and awarding Voyageur Certificates, the Saskatchewan government has preserved the legacy of the francophone voyageurs in the province’s toponymy. In the 1960s, various locations in the Churchill River Basin were given French names to commemorate some of the region’s best-known French-speaking voyageurs. These include a number of lakes, for example: Blondeau, after Bartélémi Blondeau, Cardinal in memory of Joseph Cardinal, Charbonneau to honour Jean-Baptiste Charbonneau, Deschambault in tribute to Pierre Fleury Deschambault, and Versailles for Louis Bourquin dit Versailles.

The Churchill River is also an integral part of the “Alexander Mackenzie Voyageur Route”, declared a national heritage asset in 1995, which stretches from Quebec to British Columbia. Alexander Mackenzie was a Scottish-born explorer and North West Company shareholder from Montreal, who explored what would later be called the Mackenzie River in his honour, in 1789. In 1793, he became the first European to travel overland to the Pacific Ocean. Most of the voyageurs who accompanied him on his epic journeys were French Canadians or French-speaking Métis (like Charles Doucette, Joseph Landry and François Beaulieu). Francophones also made up the majority of the North West Company’s workforce.

For thousands of years, First Nations were the only inhabitants of this huge region. Many of the names they gave to places and topographic features were translated into French by the French-speaking fur trade voyageurs. The toponymy created by the voyageurs superseded that of the First Nations, before it was replaced by the English names (some of them translated from the French) being adopted by the growing anglophone population.

In addition to French names that stood the test of time, like Lac la Ronge, Lac Île-à-la-Crosse, Lac la Loche and Primeau Lake, researchers have uncovered a wealth of French names in records and other documents written by North West Company managers and executives (known as “les bourgeois de la Compagnie”). Since many spoke French themselves, but mainly because they deemed it more practical and much safer, they tended to use the same names as their voyageurs, who travelled by and through these places every day. This explains how researchers came across this forgotten but very evocative and colourful toponymy.

Most of the names used by the voyageurs are descriptive and informative: Lac de la Montagne [lake of the mountain], Lac Vert [green lake] or Lac Clair [clear lake], Portage des Galets [pebble portage], Rapide de l’Équerre [rapids on the bend] or du Milieu [rapids in the middle]. They conjure up all aspects of nature: flora in Portage d’Épinettes [spruce portage] or du Bouleau [birch portage], and fauna in Lac des Œufs [egg lake] or du Bœuf [ox lake] and Portage la Carpe [carp portage]. Others are named for people, like Primeau Lake, in honour of Louis Primeau, one of the first fur traders to navigate the Churchill in the 1770s, or Portage aux Morts [portage of the dead], as a tribute to the Amerindian families who died in the smallpox epidemic of 1780–1782. Still others reflect the cheerful and lighthearted dispositions of these hardy voyageurs, who faced danger on a daily basis and sometimes amused themselves by inversing the meaning of the place names: Rivière Creuse [deep river], to designate a very shallow river, Grosse Rivière [big river] for a small stream, or Portage du Canot tourné [overturned canoe portage], probably referring to the need to turn a canoe over to carry it, unless it is a reminder of some mishap! Rapide Qui ne parle point [rapid that doesn’t talk] was no doubt meant as a warning to beware even though the rapid is silent. All these names are part of a rediscovered linguistic heritage, as rich in information and it is in memories.

CA
Get directions
Go to Top