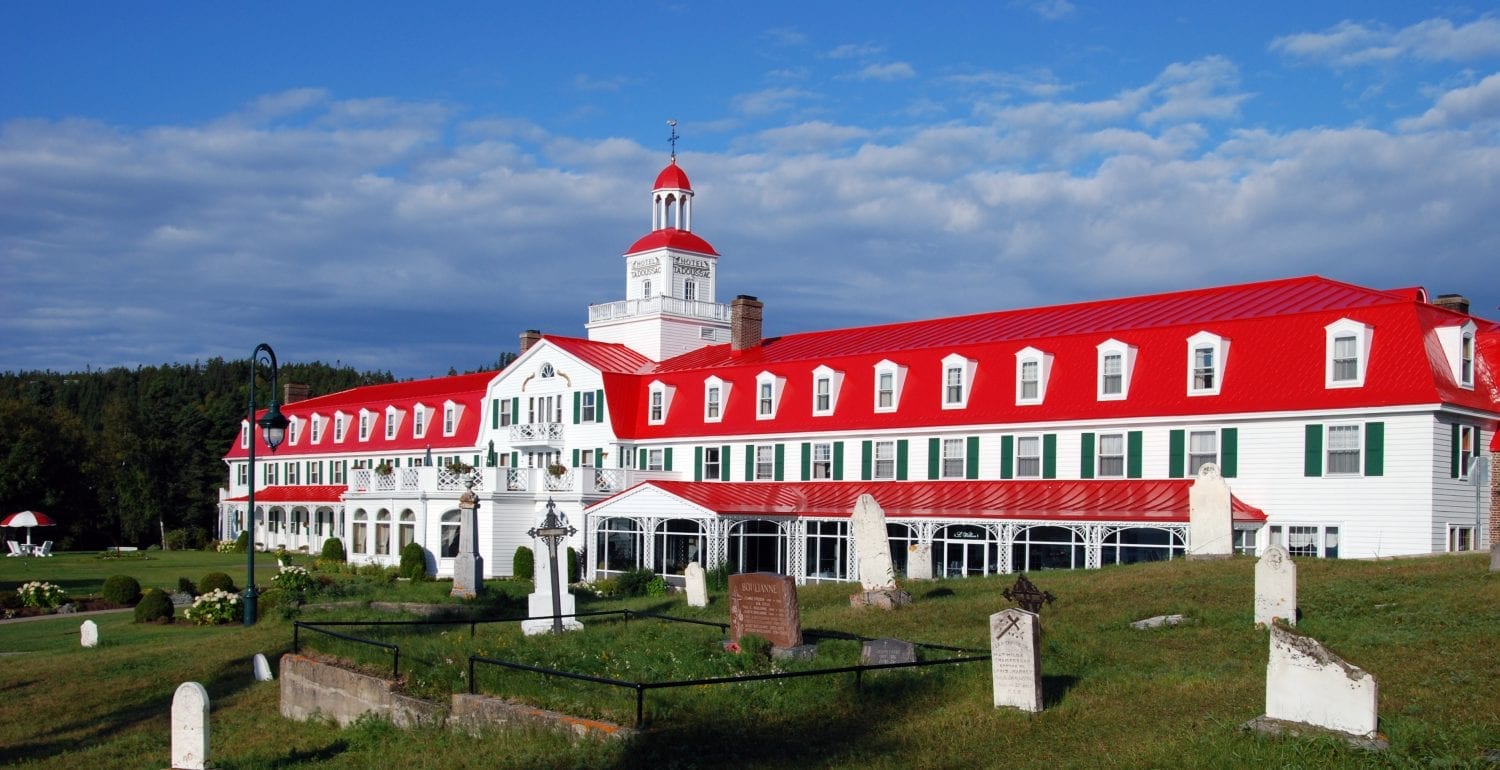 Located on a spectacular bay, at the entrance of the majestic Saguenay Fjord, Tadoussac is most famous for its whale-watching tours, which have been operating since 1979. Nevertheless, this special geographical site has a long history. For centuries, it was an Amerindian hub. In the 16th century, it was a haven for European whalers. The reconstruction of the Chauvin house, erected in 1600, gives visitors a glimpse of the time when Tadoussac was a major fur trading post. Built in 1747, the Chapelle des Indiens also evokes the years‑long mission to evangelize Amerindians. The beautiful villas and luxurious hotel that add to the village’s charm are from the 19th and 20th centuries, when Tadoussac was a very popular holiday destination. Every summer for more than 30 years, the Festival de la Chanson has been offering Francophone programming in a festive, almost family-like atmosphere. Tadoussac has always had a lot to offer those who were passing through.

Whether aboard a 12-seat zodiac or a sturdy ship that can hold hundreds of passengers, watching the giants of the sea, such as fin whales, blue whales or even the friendly white belugas, is an unforgettable experience. The likelihood of seeing whales in the Tadoussac region is very high, as regulations protecting the cetaceans are strict and the cruise industry is well organized. In addition, the natural environment, featuring the Laurentian Mountains, the Saguenay Fjord and the St. Lawrence Estuary, makes this one of the world’s most beautiful places to whale-watch.

In the eyes of the visitors strolling along the fine-sand beach or the wooden boardwalk that overlooks it, the sight of the mountains surrounding Tadoussac Bay is stunning. Hiking on the rounded rocks along the fjord or on the ridge of the hills crowning the bay, a vantage point from which Amerindians monitored the comings and goings of their allies or enemies, invigorates the senses as you discover the region’s wild nature. Tadoussac is also a service centre for land and sea excursions to the Saguenay’s national parks, located nearby.

Canadian homes and affluent villas, hotels, cottages, restaurants and shops scattered around the hill surrounding the village invite visitors to unwind and relax. At the Marine Mammal Interpretation Centre right by the wharf, a whale exhibit and Group for Research and Education on Marine Mammals staff provide the public with information on this major attraction. At the Chauvin Trading Post—a replica of the fortified home built by Pierre Chauvin in 1600—the exhibit Getting together in Tadoussac … highlights Tadoussac’s historical role as a cultural hub. The Tadoussac chapel facing the bay, designated as a heritage building, is the oldest wooden church still standing in Canada. Its gold-leaf-adorned altar enhances the warmth of its interior wooden walls and ceiling, and contrasts with the simplicity of this modest place of worship.

Just next door, the expansive Tadoussac Hotel offers unobstructed views of the bay. Its long white façade and its red roof and centre bell turret can be picked out from as far as the eye can see. This hotel is reminiscent of Tadoussac’s golden age as the holiday hot-spot and showcases a collection of French-Canadian antiques once belonging to William H. Coverdale, its owner. When he rebuilt it in 1941, Coverdale, who also owned cruise boats that stopped over in Tadoussac, had decorated it with French-Canadian antiques in a so‑called “habitant style.” Today, this collection is part of Quebec’s national treasure conserved at the Musée de la civilisation.

Every June, the Festival de la Chanson brings Tadoussac to life with a huge lineup of shows in the church and on various other indoor and outdoor stages. That is when the village transforms into a cultural capital where the public, artists and locals mingle in a warm atmosphere.

History of a cultural hub

Tadoussac is located at the confluence of two large river basins, the Saguenay−Lac-Saint-Jean and the St. Lawrence River. That is why Aboriginal nations hunted, fished and gathered there. At the beginning of the 16th century, the arrival of Basque, Breton and Norman fishermen made Tadoussac all the more important. They enjoyed the region’s abundance of whales, which fed on the large quantity of plankton generated by the mixing of fresh water from the Saguenay and sea water from the St. Lawrence, both then and now. At the end of the 16th century, European products sought after by Aboriginal peoples, who did not know how to make them, such as fabric, iron objects and firearms, were now part of fierce trade that largely replaced fishing. Because beaver pelts that the Europeans obtained in exchange for manufactured goods they provided to Aboriginal peoples were worth their weight in gold in Europe, Tadoussac became a major fur trading centre. As a result, the French forged a strong alliance with the Innu and Huron, and later settled in Quebec City permanently in 1608.

In the early 19th century, high-end cruises were all the rage among rich Brits, Scots and French Canadians from Montreal and Quebec City, who liked to spend the summer relaxing in the countryside. When the first Tadoussac hotel was built in 1864, the area became the central place for excursions on the St. Lawrence and the Saguenay rivers. Because of this setting, building a summer home in Tadoussac in 1872 was an easy decision for the Governor General of Canada, Lord Dufferin, to make.