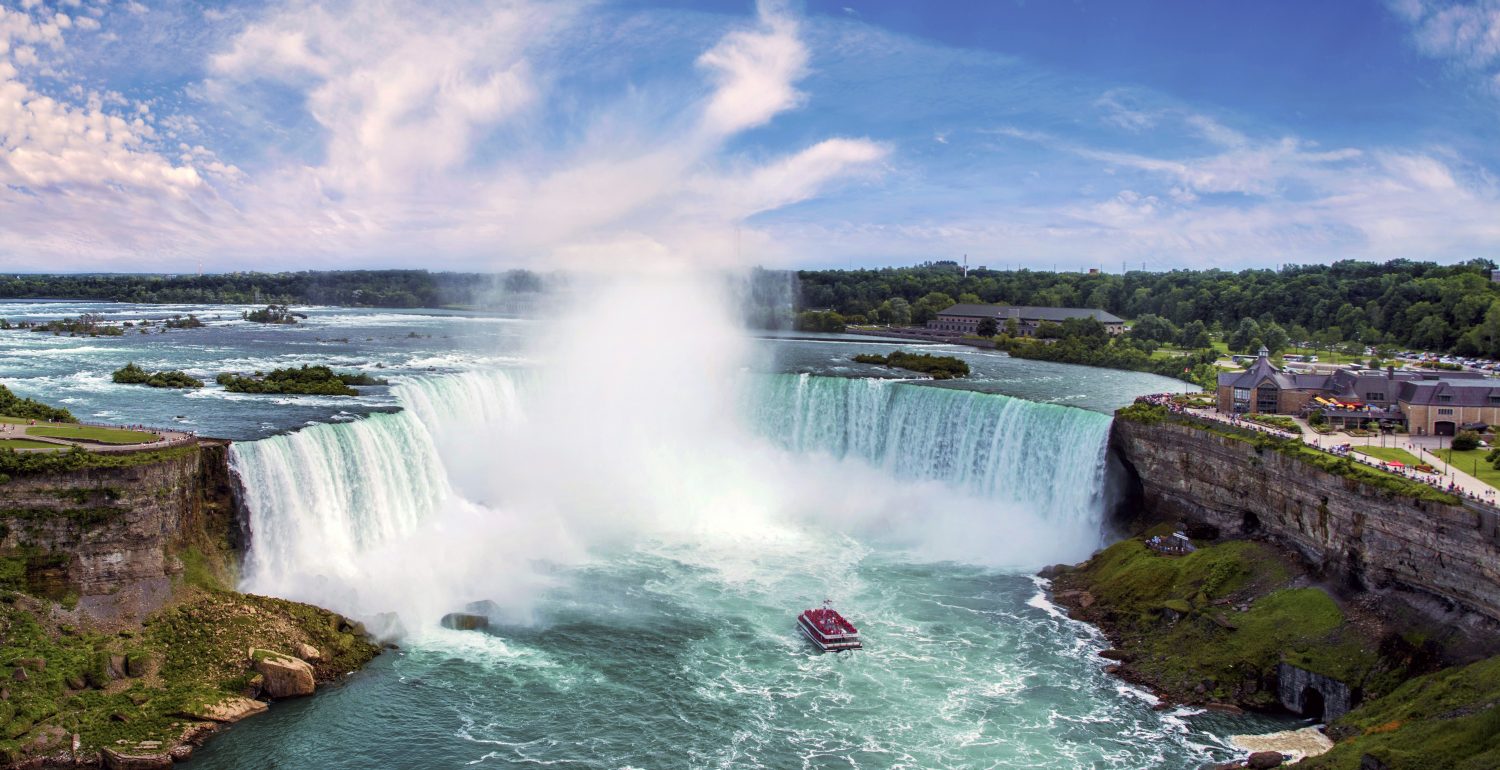 Niagara Falls were known and admired by the Indigenous peoples for thousands of years, but the first inhabitants of European origin to discover and describe them were French explorers in the 17th century. These spectacular falls spill the largest volume of water in the world, and their marvelous configuration, in horseshoe form, delights millions of visitors every year. There are also historical and heritage sites near this unique panorama, where visitors are welcomed and guided tours are provided in French to teach them about the evolution of human settlements on the banks of the Niagara River, between Lake Ontario and Lake Erie, and the strategic role that this area played during the War of 1812 between Canada and the United States.

Discovering the falls and the area

The Niagara Falls are unquestionably the main attraction in the region. Tourists can enjoy the falls from observation towers, a tunnel, a helicopter, a cable car or a motorized canoe, and can even board a boat that will take them right to the foot of the falls. This striking natural amphitheater serves as a wonderful setting for fireworks and free concerts during the summer.

Outdoor lovers will particularly enjoy the Canadian banks of the Niagara River, which runs from Niagara-on-the-Lake to Fort Erie. This long, 56 km promenade is dotted with lookouts, perfect spots to have a picnic, and heritage sites, making it a major attraction in the area. Visitors are also fascinated by the Butterfly Conservatory and its pathways bordered by lush vegetation, including a floral clock made up of 15,000 plants!

A number of organizations offer excursions, activities and services in French, including Tourisme Franco-Niagara, Centre Cyclotourisme Niagara and Cinéfest Niagara. There is also the Fort George National Historic Site, which gives visitors a glimpse of garrison life at the time of the War of 1812. Hosts in period costume and Francophone guides reveal a myriad of details about the daily life of colonists, soldiers and artisans.

A force of nature

Niagara Falls were formed about 14,000 years ago, when the glaciers retreated. The flow of water over the Canadian portion of this formation, which is 670 meters wide by 54 meters high, exceeds 2,400 cubic meters per second. It is not at all surprising that the Indigenous peoples baptized them Niagara, which means “thunder of water” in the language of the Neutral Nation, the Indigenous Iroquois who lived nearby.

In 1801, celebrated French writer Chateaubriand noted: “From Lake Erie to the Sault (Niagara Falls), the river races ahead on a steep slope, and when it reaches the falls, it is less a river than a sea whose torrents pour into the gaping mouth of an abyss.” It is like “a water column of the Flood.”

In 1885, the first Canadian provincial park was created, Queen Victoria Park, to preserve the site from speculators and ensure access for the public. Tourism thereafter had a major place in the local economy, even though the hydroelectric potential of the Niagara River has also been exploited since the 19th century.

French colonists constructed a small fort on the future site of Fort Niagara, in 1679, and then built a first settlement on the east bank of the Niagara River to defend their fur trade monopoly around the Great Lakes. Recollet priest Louis Hennepin was the first European to describe Niagara Falls, in 1679: “At a distance of four leagues from Lake Frontenac [Lake Ontario], there is an incredible sault or waterfall, which has no equal. . . . These waters foam and boil up in a frightful manner, they thunder continually, and when the wind blows from the south, one can hear the noise they make more than fifteen leagues away.”

In the Niagara Peninsula in the early 20th century, the textile industry favoured the recruitment of Francophone workers. Several dozen families from Quebec arrived in the 1910s to work in a cotton spinning mill. They were followed by a new wave of immigration lured by employment in the steel industry. In 1946, almost 500 Francophone families lived in Welland, in the neighbourhood known as French City. Today, nearly 13,500 Franco-Ontarians live on the Niagara Peninsula. At least 10% of the population in Welland and Port Colborne is Francophone, ensuring a strong French presence in the region.

Niagara Falls ON CA
Get directions
Go to Top