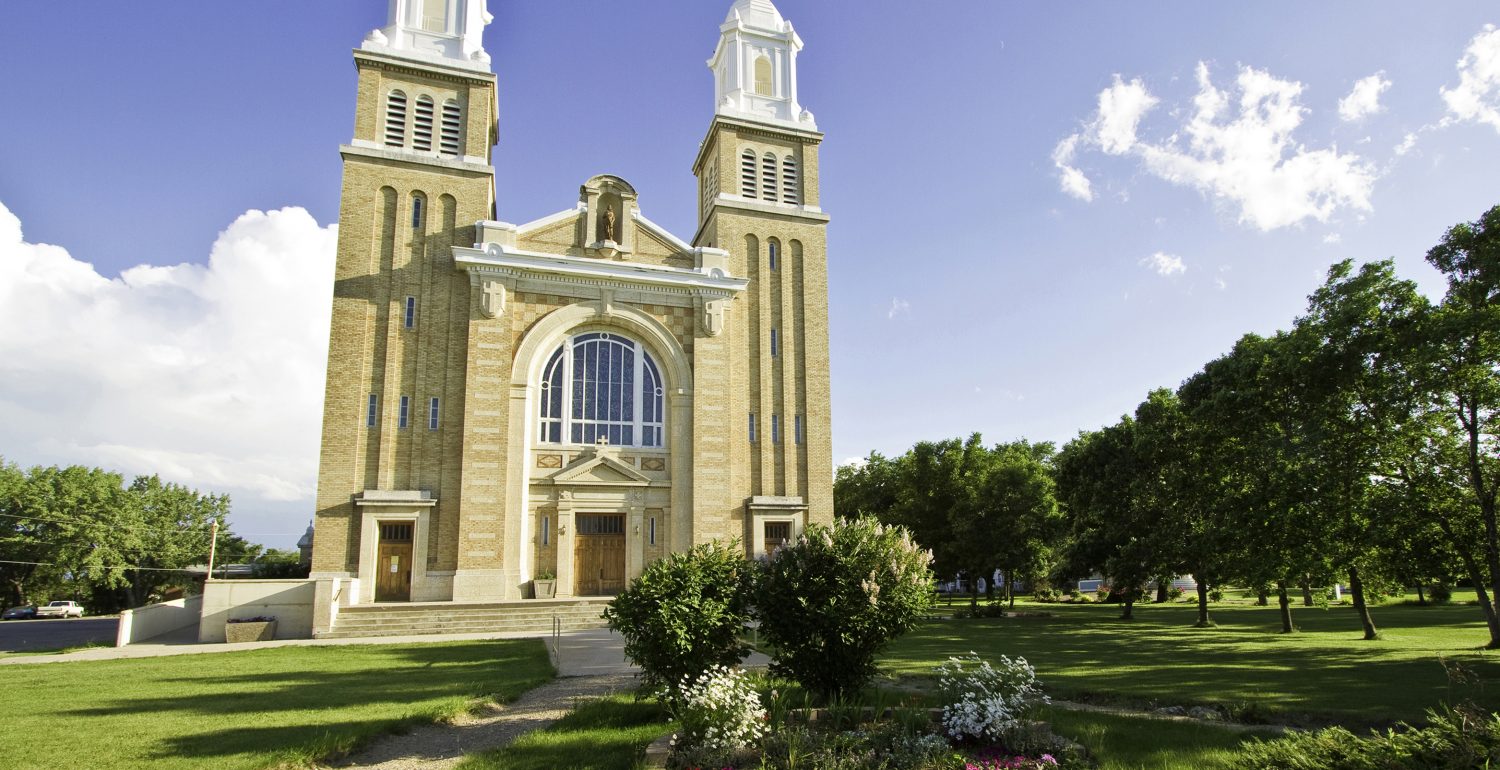 The small town of Gravelbourg has an impressive set of buildings registered as national historic sites of Canada because of the significant contribution it made to the establishment of Francophones in Saskatchewan. The exceptional Our Lady of Assumption Co-Cathedral, the Jesus and Mary Convent, the bishopric, Collège Mathieu and the residences of the Gravel family also testify to the dynamism of the Francophones who settled at Gravelbourg as of 1906. Their descendants, who today make up 30% of the town’s population, continue to emphasize the value of French culture and the heritage of the pioneers who made Gravelbourg into a high-level, rural French-language training centre, where many leaders of the Fransaskois and Francophone communities of other Canadian provinces received their training.

Showcasing the drive and heritage of the founders

The built heritage of Gravelbourg is an exemplary demonstration of a recurrent trend in the Western provinces: the central role of Catholic missionary priests in establishing Francophone communities. What distinguishes Gravelbourg—and, to a lesser extent, other villages in the surrounding area—from other rural communities of Saskatchewan is the desire of Father Louis-Pierre Gravel to make the town a French-language Catholic cultural centre of provincial importance. In 15 years, he succeeded in bringing in hundreds of immigrants, mostly French Canadians, and in providing the town with three educational institutions: the Kindergarten, the Jesus and Mary Convent and Collège Mathieu, affiliated with the University of Ottawa. He thus made Gravelbourg the centre of French-language higher education in the province, which extended its influence throughout the west during the first half of the 20th century. Construction of the impressive Church of St. Philomena in 1919 completed Father Gravel’s ambitious project.

The Gravelbourg and District Museum, open every day in summer, presents the history of this area by means of a collection of souvenirs of the Gravel family and many period objects that illustrate the daily lives of the inhabitants of Gravelbourg. The Museum also organizes guided tours of the Our Lady of Assumption Co-Cathedraland the historic sites of the town, in both official languages.

French is still very much alive in Gravelbourg, nicknamed the cultural gem of Saskatchewan. It is heard in its shops, on community radio stations and in education. Gravelbourg residents can receive instruction in French from elementary school to the post-secondary level, which is still dispensed by Collège Mathieu. At the Maillard Cultural Centre, built in 1995, the Association communautaire fransaskoise de Gravelbourg and Association culturelle franco-canadienne de la Saskatchewan organize performances, concerts, plays and community activities to preserve the French language and culture and bring Francophones together. Bilingual services and cultural activities offered at the Théâtre Renaissance Gaieté or the Summer Solstice Festival, which takes place in the third week of June, are also offered.

In 1906, when lay priest Louis-Pierre Gravel arrived on the banks of La Vieille River to found a parish on one of the concessions offered by the government, he encountered a number of individuals who had already been living there for a short time, in particular Francophones who had gathered together around Edmond Gauthier. Abbé Gravel, a native of Quebec, had been working up to then in New York, where he returned to convince impoverished French-Canadian workers to opt for the healthy life of the country, on the fertile lands where he wanted to bring together a large number of Francophone Catholics so they could preserve their identity and lead a better life. Abbé Gravel, appointed as an immigration officer by the Canadian government in 1907, the same year in which he officially founded Gravelbourg, was a brilliant preacher. Through newspaper articles and lectures, as he criss-crossed the United States, Quebec and Ontario, he recruited hundreds of candidates who were prepared to settle in Gravelbourg and the surrounding area.

In 1915, he brought from Quebec City teachers of the Sisters of Jesus and Mary congregation, who opened a convent. He then obtained a charter from the provincial government to create a French-language Catholic school, Collège Mathieu. Supported by the clergy and Gravelbourg residents, Abbé Gravel brought in the railway and saw to the construction of a station, law courts and a hospital, not to mention the monumental church that became a cathedral in 1930, four years after his death, when the creation of the Gravelbourg diocese confirmed the municipality as the centre of the Francophone community in Saskatchewan. Indeed, the cathedral, which is visible for many kilometers around, is probably the most remarkable heritage of Abbé Gravel.

The church, designed by architect Joseph-Ernest Fortin, is considered to be one of the most beautiful, if not the most beautiful church of the Francophone Catholic villages of the three Prairie provinces. Easily recognizable with its twin towers crowned with cupolas, it is a mixture of the Romanesque and Italian Renaissance styles. Monsignor Charles Maillard painted the church’s magnificent interior decor between 1921 and 1931.