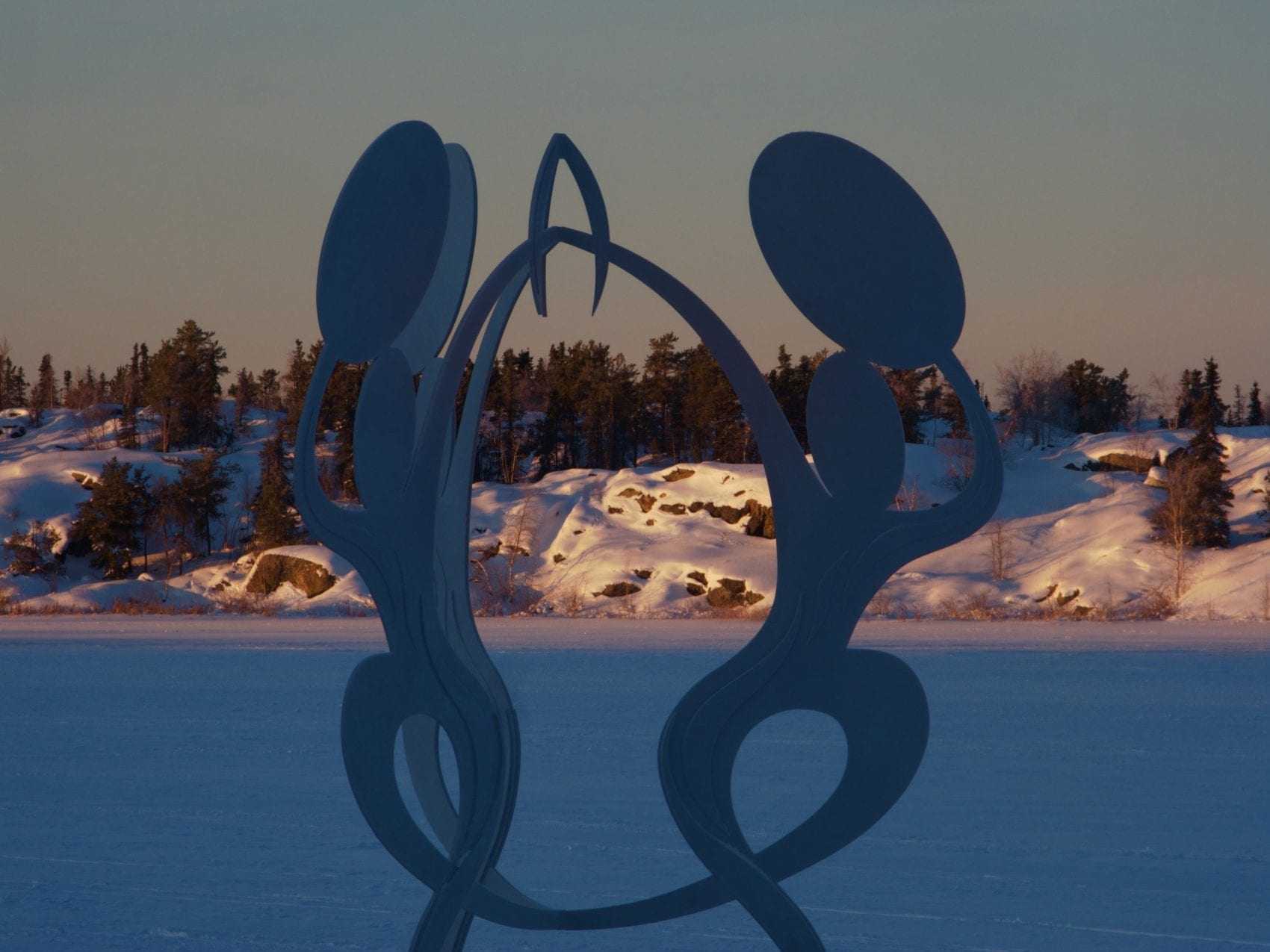 Two recent works of public art created or co-created by Francophones are enhancing the city of Yellowknife. They express the cultural diversity of the Northwest Territories, which has 11 official languages. For Francophones, this spirit of intercultural understanding and collaboration is rooted in history, when French-Canadian voyageurs in the fur trade – the first whites to settle in the North beginning in the 1770s – forged alliances with the Indigenous nations and gave birth to a Métis population. Today, Francophones are also seen as allies by the Indigenous inhabitants of the Northwest Territories in expressing their cultural differences. These Indigenous nations and the minority Francophone population share the same desire to have their language, culture and heritage recognized. This is why the Carrefour culturelartwork, in particular, was conceived and created in close collaboration with several Indigenous and Francophone artists.

Art and heritage in downtown Yellowknife

Located directly across from the Northwest Territories Museum and Archives, the Prince of Wales Northern Heritage Centre, which houses bilingual (English-French) exhibitions focused in large part on the heritage and culture of the numerous Indigenous peoples who live in the Northwest Territories, is home to the Unis dans la célébrationartwork created by the Franco-Ténois artist François Thibault, which pays homage to the people of the North. At the same time, for the artist, the three dancers that he created “are not men or women, they are not Dene, Inuit, or Francophones: they are everyone. Everyone can see themselves in them. They celebrate us,” he told the local newspaper, L’Aquilon, in 2009. The work is all the more universal because the drum dance that it depicts is a new form of a traditional dance that is performed without a drum. This new form appeared in the early 20th century in a context of intercultural influences.

François “T-Bo” Thibault, who is originally from Orleans, Ontario, is an important creator for the Franco-Ténois community. In 1992, he contributed to the final design of the Franco-Ténois flag. He has also represented the Northwest Territories at the Quebec Winter Carnival snow sculpture contest, and he designed the first necklace using diamonds from mines in the Northwest Territories in 2001. The beauty of the necklace has been celebrated on numerous occasions on the international scene.

In the oldest part of Yellowknife, close to where the Snowking’s Winter Festival is held, the Cultural Crossroads collective sculpture is a highly organized manifestation of the desire to bridge cultures that characterizes today’s Northwest Territories. In 1996, the Fédération franco-ténoise launched a collaborative artwork project uniting Indigenous and Francophone artists, to highlight their good relations (despite the Indigenous residential schools issue, which has had serious consequences).  Three years later, the Mayor of Yellowknife approved the project. In 2002, the artists put the finishing touches on their sculpture: Sony MacDonald, a Métis from Fort Smith; John Sabourin, a Dene from Fort Simpson; Eli Nasogaluak; an Inuvialuit from Tuktoyaktuk; and Armand Vaillancourt, a Francophone Quebecer from Thetford Mines.

The main sculpture, comprising three elements, is located at the bottom of McAvoy Rock. It was created by the three Indigenous artists. It is made up of an Indigenous drum and three animals dancing together. The fish, the Métis spirit animal, symbolizes the water; the bear, the Inuvialuit spirit animal, symbolizes the land; and the eagle, the spirit animal of the Dene, symbolizes the air. The drum represents the universal language of music. A steel tepee made by the Quebec artist is located on top of the rock. It attests to the ancestral rights to the territory that history has granted to the Indigenous community. These two elements are joined by a collection of animal and human signs and symbols – including hundreds of handprints – painted and engraved on the surface of the rock by Vaillancourt and two other Francophone artists from other provinces, with assistance from the residents of Yellowknife who collaborated on this project. The biggest of these motifs is a large raven, which is soaring in the middle of a circle, symbolizing the sense of belonging to the Far North felt by the communities involved in creating this public work of art.

A short distance away from the Cultural Crossroads is the Pilots Monument, erected on top of the rock around which Yellowknife developed in its early years. The monument pays homage to the bush pilots and engineers who lost their lives supplying remote villages and work camps or mapping the territory in the 1920s and 1930s. From this site, visitors have the best, 360-degree view of Great Slave Lake, Joliffe Island, Yellowknife Bay, and the old city. In 1999, a plaque was added to pay homage to the many different cultures that forged the Northwest Territories.