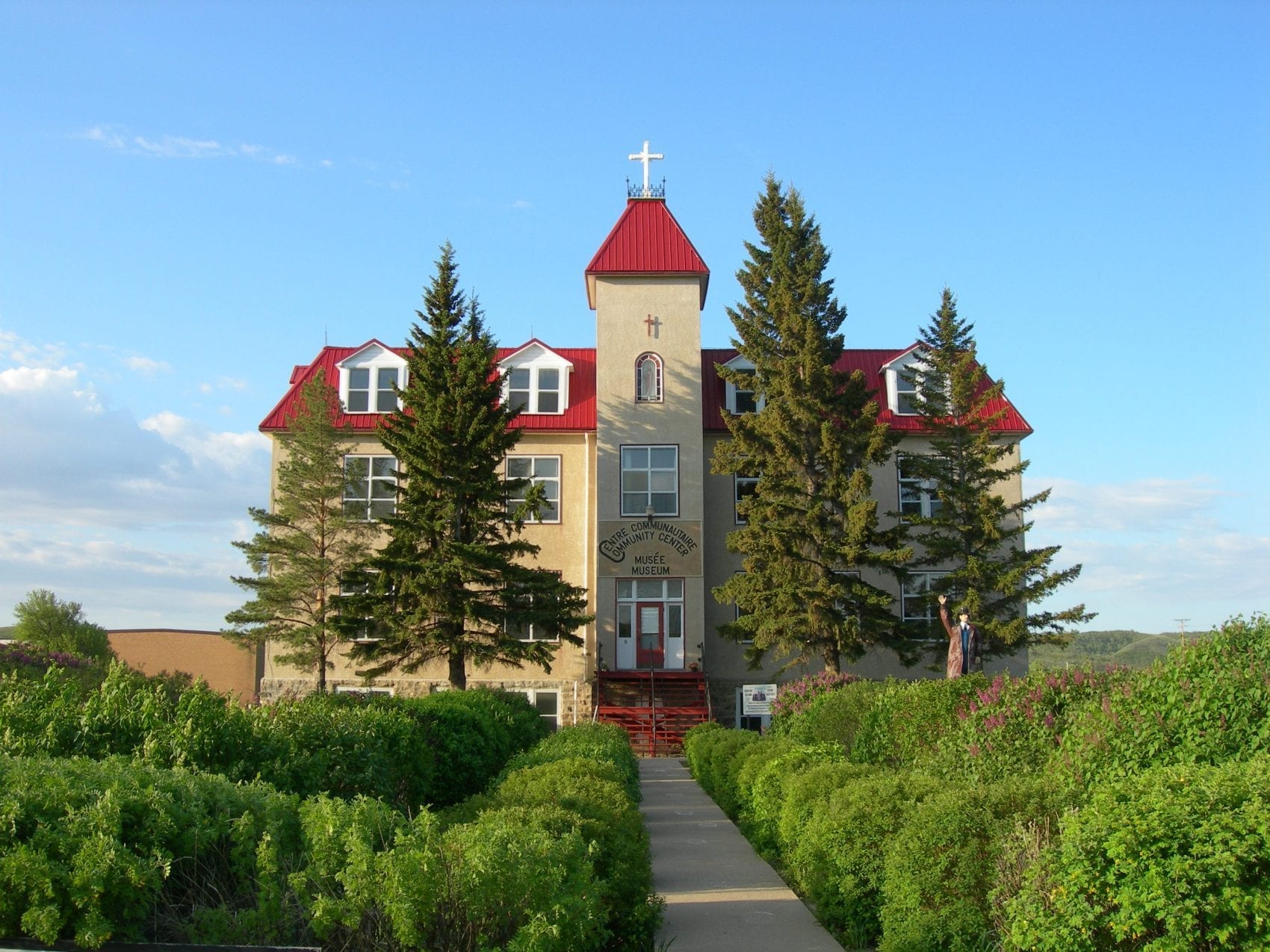 In Willow Bunch and St. Victor, two neighbouring villages located 190 km southwest of Regina, memories of a time when Francophones dreamed of creating a vast Francophone region in the middle of the fertile plains of Saskatchewan persist in three local museums. The museum in Willow Bunch (formerly Talle-de-Saules), founded in 1972, is located in the former Sisters of the Cross convent, built in 1914. Its main subject is the Beaupré giant, who was born here in 1881. In St. Victor, visitors can see the house of the Francophone Métis Alexandre McGillis, who greatly contributed to the formation of the village at the turn of the 20th century. The Le Beau museum, established in the former church of St. Victor, deals mainly with the role of the priests who founded the colony. Since 2008, the Campagnes, a well-known family of singers and musicians who are natives of Willow Bunch, have welcomed Farm Fest participants on their ancestral land, located near the village. This increasingly well-attended event highlights Fransaskoise culture, music, and organic farming.

Almost two thirds of all Fransaskois live in the three major cities of Saskatchewan: Regina, Saskatoon, and Prince Albert. However, in the rural areas in the southern part of the province, there was a time when some Francophone communities were solidly planted, when in the early 20th century French-Canadians joined the Métis pioneers who had settled there in the 1870s and 1880s.

Around 1925, municipalities such as Gravelbourg, Willow Bunch, St. Victor, Ponteix, Laflèche and several others had majority Francophone communities. In many cases, over time, the members of these communities mixed with their neighbours of diverse origins and adopted English as a common language, so that the heritage of this period of Francophone settlement is now rather limited.

Gravelbourg, which was the centre of the Francophone community in Saskatchewan in the first half of the 20th century, has remained the most Francophone rural municipality in the province. Willow Bunch has a museum with a dozen exhibitions on important Francophone personalities from the area, such as the Quebec businessman Jean-Louis Légaré, who founded a trading post there in 1871. Légaré, who married a local Métis woman, served among other things as a mediator between Canadian authorities and the Sioux led by Chief Sitting Bull when they sought refuge in Canada between 1876 and 1881 after the Battle of Little Bighorn. The exhibition dedicated to the giant Édouard Beaupré, whose pituitary gland tumour caused him to grow to an excessive size—he was more than 2.5 m (8’3″) tall—includes a life-sized statue, his original nine-foot long bed, personal effects, and several photos. The exhibition dedicated to the Sisters of the Cross, who taught in the village, is presented in the convent’s original chapel. The Le Beau Museum, located on the main street of the small village of St. Victor, in the church built in 1914, focuses on the creation of the parish and presents several religious objects used by the first Francophone priests in the diocese. In the summer, guided bilingual tours are offered upon request. In Ponteix, Francophone culture is transmitted to the younger generation at the École Boréale and the Centre culturel Royer. In Val-Marie, a small village located at the entrance to Grasslands National Park, the Francophone presence is noted in a local exhibition.

At the turn of the 20th century, the government of Canada freely distributed land to newcomers in order to populate the Canadian prairies, which were previously inhabited exclusively by Indigenous peoples. As these regions had only been tentatively explored, then settled by Francophone Métis and French-Canadians, the Catholic Church wanted to continue to ensure a Francophone and Catholic presence on the Prairies, in a period where a large number of British and American immigrants and immigrants from other diverse backgrounds were flowing into the area.

It was in this context that settler priests played a central role in recruiting new settlers and bringing them together in relatively homogeneous rural communities. One of the most active of these priests, Father Louis-Pierre Gravel, was instrumental in forming the villages of Gravelbourg, Ponteix and Laflèche. Willow Bunch and St. Victor were also populated with French-Canadian settlers as part of this movement led and supported by the Church.

The brochure promoting rural life Une paroisse d’avenir: Laflèche, Saskatchewan, published by the Compagnie canadienne de colonisation in 1915, gives a good idea of the arguments used to convince Francophones to settle in the Prairies.

“The future is in the new country. […] Here, we do not know a single farmer who has lacked a good harvest on well-worked land. […] Those whom Providence will guide to Laflèche have nothing to fear. Here they will be in a French-Canadian place. They will be able to conduct business in French and hear their mother tongue spoken all around. [Furthermore], around Laflèche there are other Francophone parishes, such as Gravelbourg, Meyronne, Ponteix, Assiniboia, Willow Bunch; the whole region is destined to become French and form the capital of French influence in Saskatchewan”, wrote the parish priest of Laflèche, Émile Dubois.

The first land in Laflèche was granted to Joseph Morasse from Portneuf County in Quebec in 1905. The village of Laflèche was incorporated in 1913, and two years later, 325 of its 410 inhabitants were French-Canadian. One hundred years later, in 2016, there were only 25 bilingual people (English-French) remaining out of a total of 370 inhabitants in Laflèche, which is still fundamentally a farming community. For the time being, there are no plans to promote the Francophone heritage of Laflèche.

The most vibrant Francophone activity in this region is currently the Farm Fest, which the Campagne family has organized in Willow Bunch every summer since 2008.