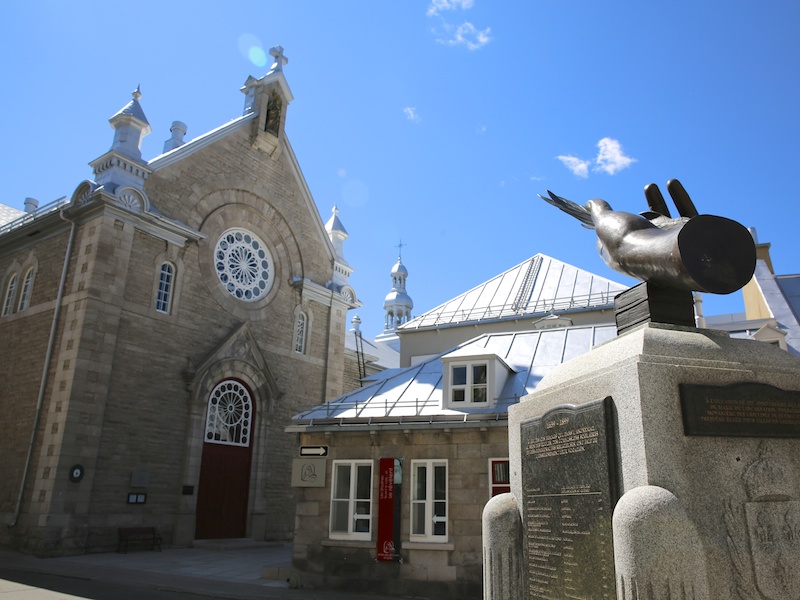 Since their arrival in Quebec City in 1639, the Ursulines have played a major role in the education of girls, from the early years of New France up to our time. Their monastery in Quebec City, designated a National Historic Site of Canada in 1972, comprises several stone buildings constructed between the 17th and the 19th centuries. Their collections, which are among the richest and oldest in North America, are displayed in the Musée des Ursulines de Québec, which sheds light primarily on two fundamental aspects of the community: the religious vocation, and the education of girls. These two themes reflect the evolution of the Ursulines and of Quebec society. The public may also visit the chapel of the Ursulines and spend a moment of quiet reflection at the tomb of Marie de l’Incarnation, the saint who founded the order.

The heritage of the Ursulines

The monastery buildings illustrate the development of the community. To the buildings dating from the French Regime were added wings primarily built between 1836 and 1874, when the population of students and novices was growing quickly. These improvements made it possible to add visiting rooms, a refectory, a school and a novitiate, and to enlarge the kitchens and the infirmary. The interior decor, designed by architect Baillargé, and grilles of the old visiting room have been preserved.

The chapel, which burned down several times, was reconstructed in its current form in 1902. The art works in the chapel date from the French Regime, in particular the tableaux and the high altar. This is the only religious decor dating back to that era which has survived unscathed. The oratory and tomb of Marie de l’Incarnation, beatified in 1980 as “Mother of the Church in Canada,” are located in this chapel, which is open to the public. It is also possible to visit the contemplation gardens, where sisters meditate and pray. They are among the most well preserved of Old Quebec.

The rich heritage of the museum includes many treasures, including the trunk that Marie de l’Incarnation used on her voyage from France to Quebec City in 1639; items made of bark and embroidered with porcupine quills or dyed moose hair, vestiges of the blending of Indigenous and French techniques; extremely rare Parisian jewelry dating from before 1717; ornate embroidered, painted, gilded and sculpted liturgical vests; and fine embroidery for which the Ursulines were well known.

The school of the Ursulines of Quebec City today offers elementary level education for boys and girls (but not co-educational), demonstrating a commitment to education that is almost four centuries old.

The first Ursulines, Marie de l’Incarnation, Marie de Saint-Joseph and Cécile de Sainte-Croix, arrived in the colony on August 1, 1639 with Marie-Madeleine de la Peltrie, a patron and friend of the congregation. These pioneers immediately undertook their mission of educating and evangelizing Indigenous and French girls. They learned reading, writing and arithmetic, and also embroidery, gilding, painting and music, not to mention catechism. When the Ursulines arrived, Quebec City was a small town with about 200 inhabitants of French origin. The majority was made up of Indigenous people, but they were merely passing through, since nomadic nations of hunter-gatherers frequented the region. As of the 1670s, however, the students of the Ursulines were primarily French.

The education curriculum kept pace with societal changes. After the Conquest of New France in 1760, the Ursulines started to take in daughters of British administrators who thought it important to learn French, then a great international language. In the 19th century, the sisters added history, geography, national history and foreign languages to the curriculum, then stenography, typewriting and telegraphy. From 1857 on, the normal school of the Ursulines educated Quebec’s future female teachers. Affiliation with Laval University in 1912 led to the addition of pure science and mathematics to the curriculum. Finally, classical studies started being offered to the girls in 1937.

The Ursulines’s heritage was first showcased in 1936, with the creation of a small museum presenting the origin of the congregation, its religious values and the history of its founders. It subsequently became an archives museum. In 1979, the Ursulines museum became the first accredited museum of a religious community in Quebec. It exhibited its impressive collection consisting of works of art, china, embroidery, everyday items, Indigenous crafts, religious prints, musical instruments, natural science specimens and astronomical instruments. The museum updated its concept and exhibits in 2011.