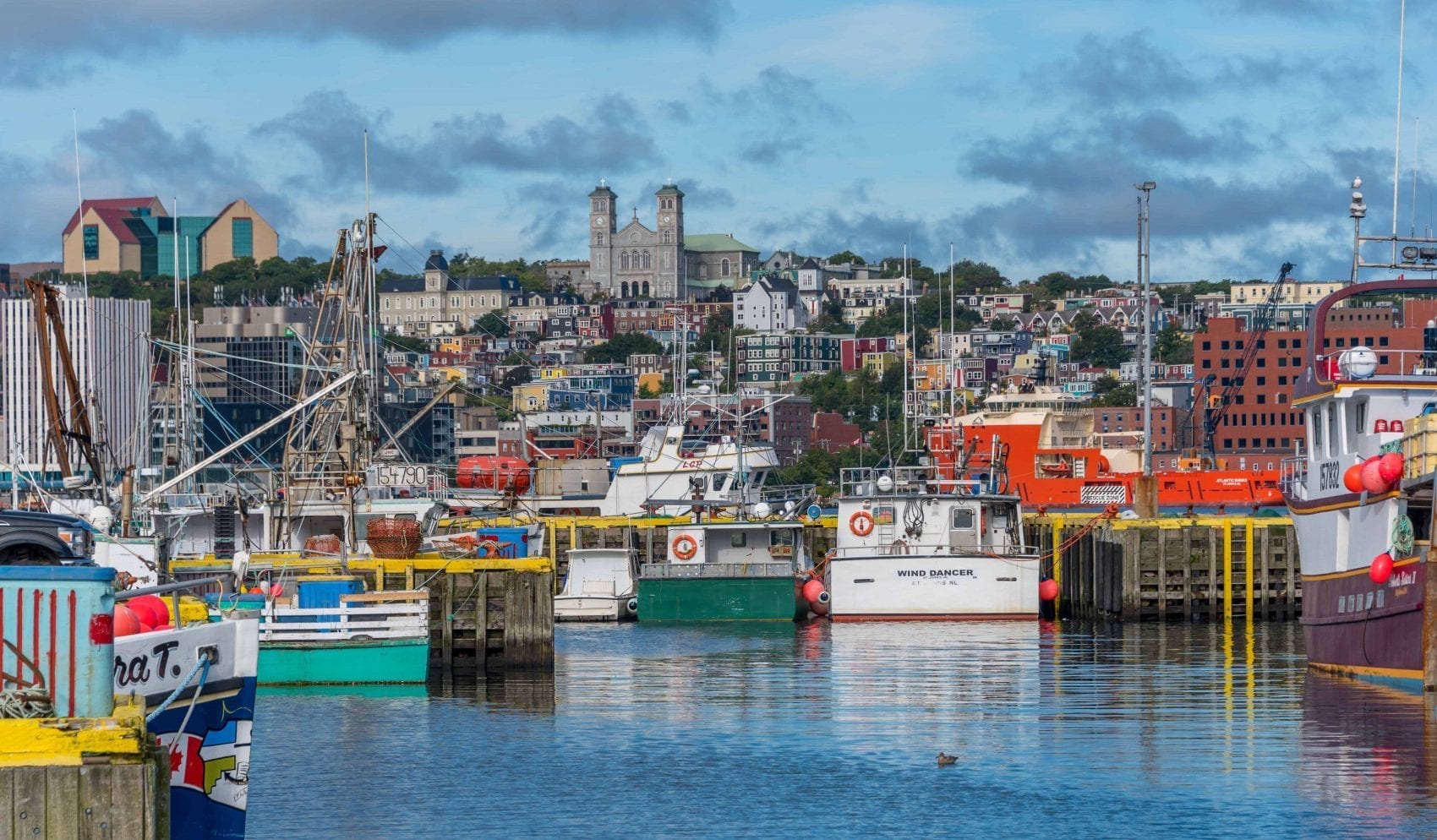 Located in the northeast of the Avalon Peninsula, St. John’s is the capital of the province of Newfoundland and Labrador. It was so named because it is said that the Venetian explorer Giovanni Caboto (John Cabot for the English and Jean Cabot for the French) set foot there on Saint‑Jean-Baptiste Day in 1497! This anecdote is a reminder that the area was one of the first sites Europeans arrived at in the Americas. Today, St. John’s has the largest concentration of Francophones in all of Newfoundland and Labrador. While the situation of this small minority community (less than 0.4% of the province’s population) is still a cause for concern, its members demonstrate amazing vitality, with French-language community organizations, media and events. It is particularly active in St. John’s.

The colourful downtown of St. John’s has to be explored on foot. It dates back to 1892, after a fire ravaged the city and destroyed 2,000 buildings. As it was rebuilt, new architectural styles were introduced, including Neo‑Gothic, Queen Anne and Second Empire. The Colonial Building, the Roman Catholic Basilica and the Anglican Cathedral are remarkable. Local craft boutiques and bars in a variety of vibrant colours brighten the streets, often brought to life by the sounds of Irish music.

For more than 40 years, the Newfoundland & Labrador Folk Festival has marked the end of the summer. Held in Bannerman Park, it features a range of Francophone, Francophile and Anglophone artists in happy musical harmony.

The Festival du Vent is another great showcase for local Francophone culture. Each fall, the entire St. John’s region is invited to the Centre scolaire et communautaire des Grands-Vents to attend French-language musical, circus and theatrical performances, and a chance to admire the works of local visual artists.

The island of Newfoundland was one of the first places visited and then settled by Europeans. Its early days were marked by rivalry between the two nations that lived there: the English, in the north, who had chosen St. John’s as Newfoundland’s capital, and the French, in the south, who had made Placentia their stronghold in Newfoundland.

Despite occasional conflicts (including the near-total destruction of St. John’s by Pierre Le Moyne d’Iberville in 1696), they continued to live side by side until the Treaty of Utrecht of 1713. The island then became completely British, with the exception of one long section of coast named the French Shore, where the French kept fishing rights during the summer. A few pockets of Francophones also remained in remote areas, particularly on the southwestern shore of the island. Those Francophones saw themselves as “survivors” given the large Anglophone majority that surrounded them, and this is still a part of the Franco-Newfoundlander identity.

Roughly 700 Francophones from various backgrounds live in St. John’s today: Franco‑Newfoundlanders, Quebecers, Acadians, Saint-Pierrais, French, and Africans. They are mainly professionals, public servants and academics. There are also a few hundred Francophile Anglophones that actively contribute to preserving the memory and vitality of the French presence in Newfoundland by participating in artistic and cultural activities held in St. John’s.

Various organizations ensure the continued existence of the French in the capital. Established in 1973, the Association communautaire francophone de Saint‑Jean organizes reading groups, French courses, storytime for pre-schoolers, and French-language movie screenings. For a number of years, it has also organized Franco Fest, a festival celebrating the Francophone music, theatre, visual arts and traditional cuisine of the Avalon Peninsula.

Founded in 1984, the bimonthly newspaper Le Gaboteur, the province’s only Francophone print medium, covers local, national and international news. Le Teatro has been offering French-language theatre programming for young audiences since 2000. The Francophones of Newfoundland-and-Labrador web portal provides a wide variety information, including a directory of health resources, an inventory, of French-speaking artists and access to Rafale, a Francophone online radio resource.

Since 2004, the Centre scolaire etcommunautaire des Grands-Vents has been a living space, a grouping of associations and a Francophone educational institution attended by students from kindergarten to Grade 12. Also in the educational vein, Memorial University offers French‑language programming for teachers who want to improve their knowledge of the French language, literature and culture. The campus also has a Centre d’études franco-terre-neuviennes, whose collection of archives preserves the findings of ethnographic research and the Francophone oral memory of the province.