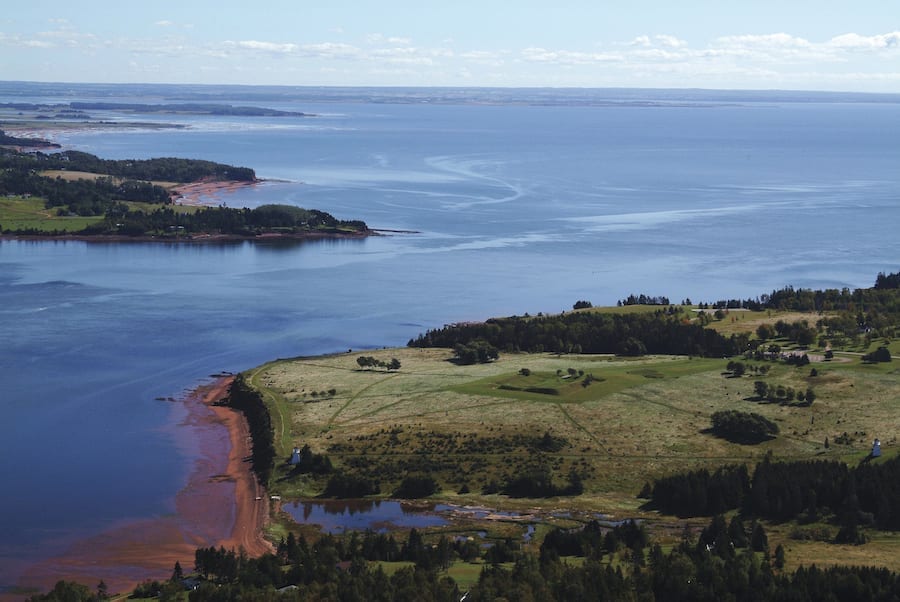 Port-la-Joye—Fort Amherst was designated a national historic site of Canada because it played a central role in the French settlement on Saint-Jean Island (present-day Prince Edward Island) from 1720 on. The Mi’kmaq and the French used to gather here every year to renew their alliance, until the British conquered the island in 1758 and then rounded up 3,100 Acadians to deport them. It was on the same site, at the entrance to Charlottetown Harbour, that the English established the first command post on the island, Fort Amherst. Visitors have a magnificent view of Charlottetown from this place so full of remnants and memories.

Piecing together the past

Visitors can easily understand why the soldiers built a fort at this location, as they stroll along the pathways dotted with interpretive signs scattered along the vast perimeter open to the sea. Looking down, they can see the deep water that offered a safe and well protected port. From the spit of land that holds the harbour in its grip like pincers, they can easily understand that this geographical formation protects the inhabitants within the harbour. Visitors can see the exact position of the two successive fortifications as they walk on the grass‑covered foundations of Fort Amherst, built by the British on the same spot as the French fort.

A short distance from the site, a monument indicates the exact place where most of the first 300 colonists from France built their dwellings in 1720. This monument commemorates the arrival of Michel Haché-Gallant and his wife Anne Cormier, in the same year. This Acadian couple had come from Beaubassin, on the border between what are now New Brunswick and Nova Scotia. A few dozen other Acadians chose to settle on Saint-Jean Island at that time. These soldiers, fishermen, farmers and sailors were the first inhabitants of European origin to come and live on the island. Before them, the Indigenous peoples of the Mi’kmaq Nation inhabited what they called Epekwitk, which means “cradle on the waves.”

These 300 French pioneers worked for the Compagnie de l’Îsle Saint-Jean, owned by the Comte de Saint-Pierre, who had obtained exclusive right to fish on the island provided that he establish a colony there. However, the enterprise was not profitable, and many French people went back to the motherland. Those who remained on the island were for the most part Acadians, in addition to a few natives of France.

This small community of a few hundred inhabitants was under the authority of a governor, who lived in Louisbourg, on Île-Royale (present-day Cape-Breton Island). The initial objective, which was to supply this fortress town with food, was never attained, since local farming and fishing were barely sufficient to feed the local population. Life on Saint-Jean Island was precarious.

The situation worsened in 1745 when Louisbourg fell into the hands of the British. A British detachment went to Saint-Jean Island and burned down the fort and dwellings. The French population had to leave the island. The French then re-established Port-la-Joye in 1748, under a peace treaty between France and England. However, there was great tension throughout the Atlantic territory, to such a point that the island’s population grew from 735 to some 3,000 people between 1748 and 1754. A large number of Acadians had abandoned their ancestral lands in Acadia to escape the threat of reprisals from the British, who had controlled this territory since 1713, and to take refuge on the island. Their efforts were in vain, however, since Louisbourg, Île-Royale, Saint-Jean Island and New France all fell permanently into British hands between 1758 and 1760.

At Port-la-Joye—Fort Amherst, a monument erected in 2008 commemorates the Deportation of 3,100 civilians, for the most part Acadians, whom the British rounded up there in 1758 and put aboard ships headed for France. More than half of these deportees died during the ocean voyage or shortly after their arrival. The British established their government on the site of Port-la-Joye, which they renamed Fort Amherst. They remained there until 1768, then moved the garrison and the government to Charlottetown, which is still the capital of Prince Edward Island today.

When they arrived, the British troops systematically “cleansed” the island of the Acadians who lived there. Nevertheless, a little over a thousand of them managed to flee the island before being captured. The 200 or so who came back to settle there after 1764, with the authorization of the British, are the ancestors of most of the Acadians who now live in Prince Edward Island.