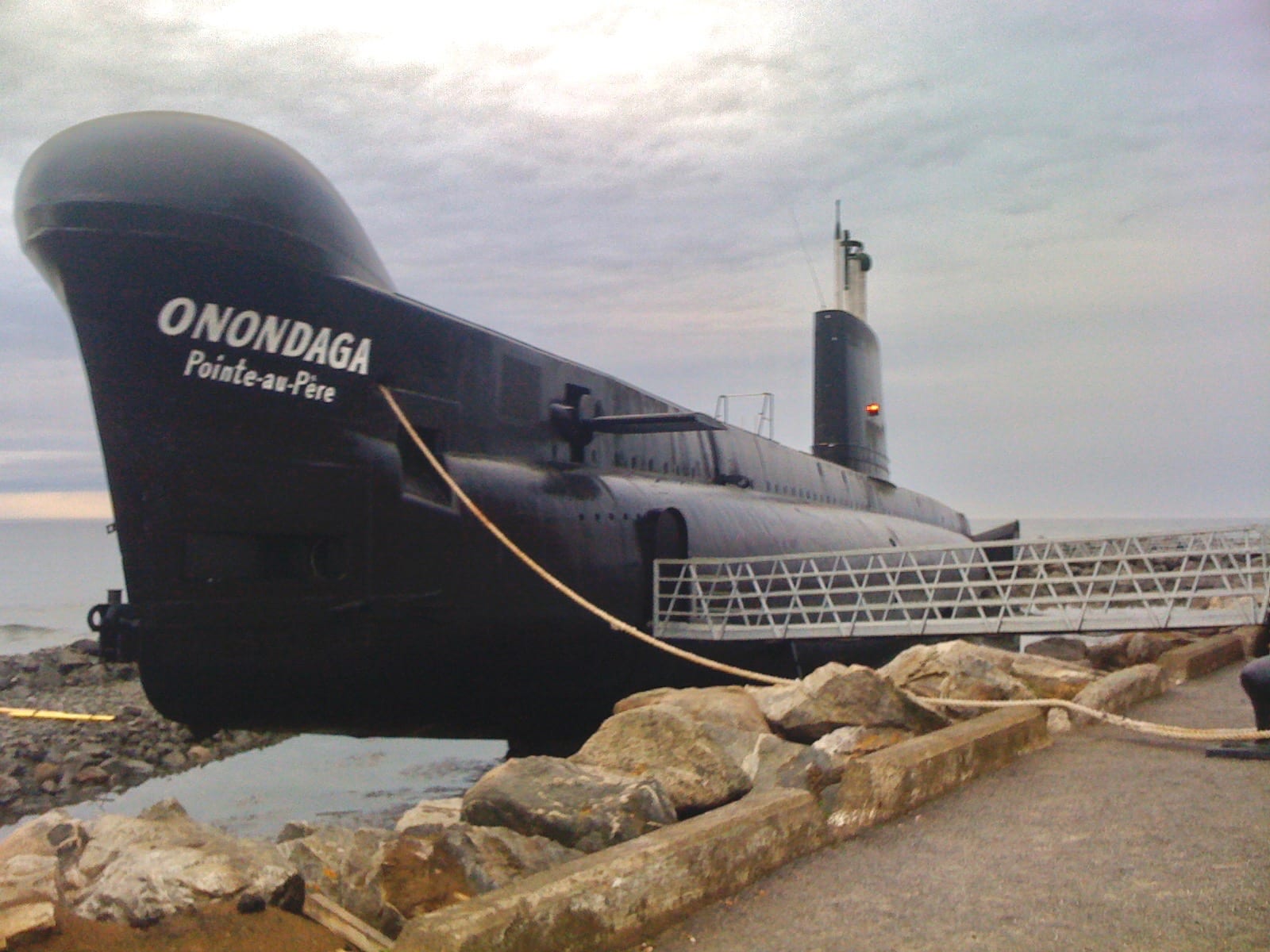 The Pointe-au-Père lighthouse, located a few kilometres east of Rimouski, played a key role in navigation on the St. Lawrence River. Designated a National Historic Site in 1974, it preserves the legacy of a way of life as well as knowledge and skills that for many years were essential but have all but disappeared today. On the same site, visitors can board the Onondaga submarine, view a gripping multimedia show on the sinking of the Empress of Ireland, the second deadliest maritime tragedy after the sinking of the Titanic, and take in an exhibit depicting life in Quebec in the early 1900s. These unique attractions make Pointe-au-Père one of the most popular and interesting destinations devoted to maritime history in Canada.

The Pointe-au-Père Maritime Historic Site is part of Quebec’s Lighthouse Trail, a heritage tour that includes about forty of these vital aids to navigation that are now open to the public. The decommissioned octagon-shaped lighthouse at Pointe-au-Père is made of reinforced concrete and has eight projecting buttresses. The second tallest lighthouse in Canada, it is one of nine built in a similar style across the country in the early 1900s. From the top, 33 metres in the air, visitors can take in breathtaking views of the town and the St. Lawrence Estuary and its shoreline. Beside the lighthouse are the foghorn shed and the lightkeeper’s cottage.

Nearby is the Empress of Ireland exhibit, where visitors can learn about—and relive, through a high-spec multimedia show—the tragic sinking of this transatlantic steamship, that went down off the coast of Sainte-Luce-sur-Mer (very close to Pointe-au-Père) on May 29, 1914. Of the 1,477 people on board, 1,012 perished. This disaster occurred two years after the sinking of the Titanic, which a number of Empress of Ireland passengers had survived. An interactive exhibit summarizes the ship’s history and the underwater exploration of the wreck. Steps away, visitors can also board the Onondaga, a submarine built in the 1960s for the Royal Canadian Navy, and discover what life was like for the 70 men who lived for months at a time on this narrow, 90-metre vessel. There is even the option of spending a night aboard!

For more than 100 years, the Pointe-au-Père lighthouse was the core of one of Canada’s largest navigational aid stations. In fact, three successive lighthouses were constructed after the first, built in 1859. The buildings on the site reflect key stages in the history of navigation on the St. Lawrence.

Pointe-au-Père was designated the eastern limit of the St. Lawrence Estuary in 1805, after which time vessels travelling to Quebec City had to take on a river pilot to navigate the dangers of the estuary, such as currents, reefs and shallow waters. In 1860, the Corporation of St. Lawrence Pilots began overseeing the profession to prevent pilots risking their lives by going farther out to sea to meet vessels. Some pilots had already chosen Pointe-au-Père as their embarkation point. To help ship captains pinpoint the location, the first lighthouse was built in 1859, accompanied by a cannon to send out sound signals in heavy fog.

From 1905 to 1959, the St. Lawrence pilots used Pointe-au-Père as their base of operations, making it necessary for all vessels on the river to pass by the station. The present lighthouse, taller and better reinforced than its predecessors, was built in 1909. The site also served as a Marconi telegraph station (1907), a test centre for sound signals, and a medical inspection station. The Pointe-au-Père navigational aid station was closed in 1998.

The navigational aid station at Pointe-au-Père was designated a National Historic Site as part of an appeal launched in 1973 to save Canada’s most historic lighthouses. Not long after, the heritage value of the lighthouse itself and the foghorn shed were also recognized. A monument unveiled on the site in 1995 honours the memory of seamen of the Royal Canadian Navy and the Lower St. Lawrence merchant navy who died at sea in the Second World War. A plaque erected in 2002 pays tribute to the significant contribution of the Lower St. Lawrence pilots in the development of Canada.

Maritime life and navigation helped shape the identity of the people living in the Lower St. Lawrence region. Place names, like Rue du Phare (lighthouse road) and École du Vieux-Phare (old lighthouse school) in Rimouski, reflect the community’s attachment to this heritage. In 2000, the entire complex was renamed the Pointe-au-Père Maritime Historic Site.