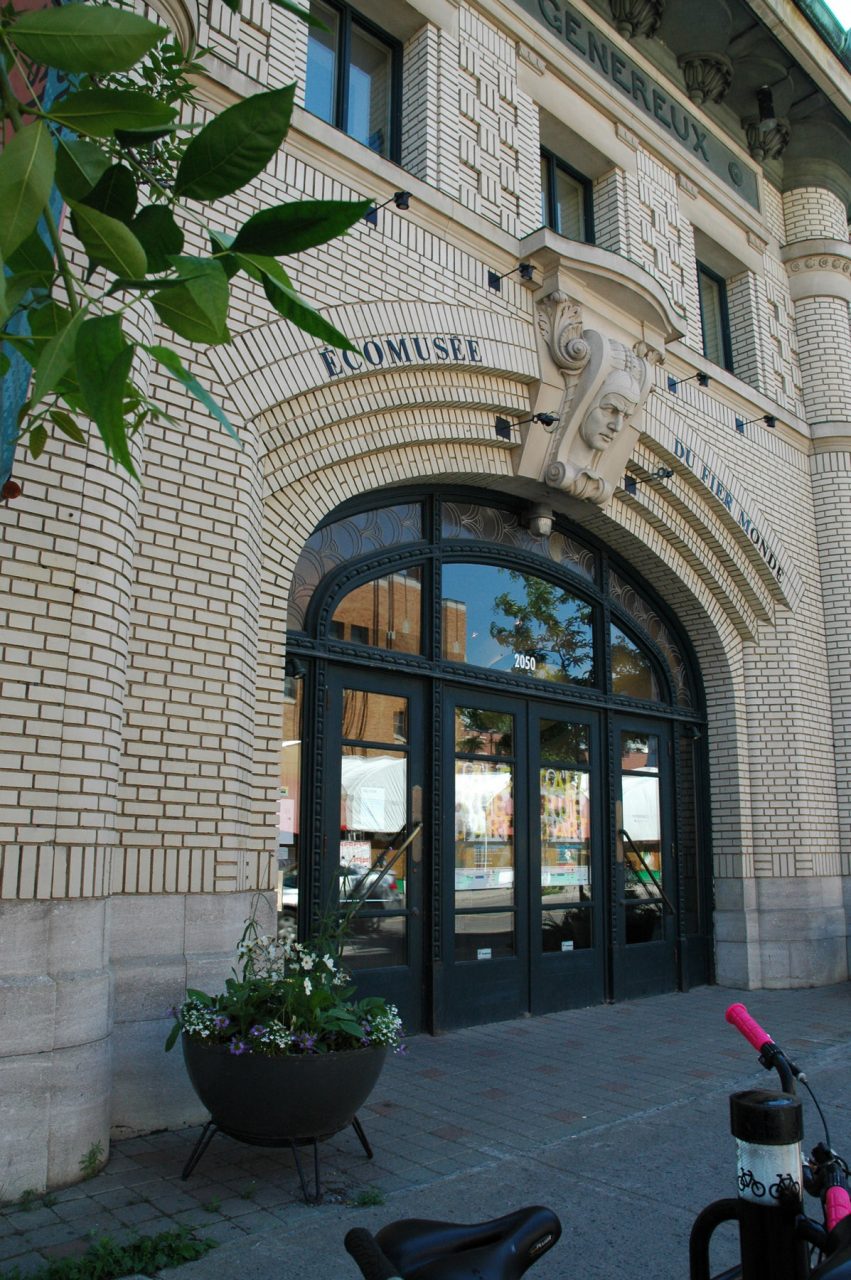 The Écomusée du fier monde is the brainchild of community organizations in the Centre-Sud neighbourhood of Montreal, which, in the 1970s, were working to attenuate the negative impact of deindustrialization. The museum’s goal is to preserve its community’s past and foster its future development. Its vocation as an ecomuseum was established from the outset, and is maintained thanks to participation in its activities and contributions to its collections by organizations, businesses and residents in the community. Its exhibitions recount the story of the working class and their living environment through the different phases of industrialization, deindustrialization and revitalization of the Centre-Sud neighbourhood from 1850 to 2000. The museum’s promotion of the neighbourhood’s material and immaterial heritage involves participatory projects, public education, thematic urban tours and the designation of heritage property belonging to partners. The Écomusée du fier monde has won some 15 awards in museum practice and heritage interpretation for its innovative work.

A museum steeped in its community

Since 1996, the Écomusée du fier monde has been located in the old Généreux public bath, which was open from 1927 to 1992. At the time of its construction, many families in Montreal’s working-class neighbourhoods did not have access to a private bath or shower, or even to running water. To address the problems of poor hygiene and high infant mortality in the poorer districts of Montreal, the city constructed several free public baths between 1910 and 1930. At the Généreux bath, a building in the art deco style, a large pool also satisfied the public’s recreational and sports needs. The renovation/transformation of the pool into a multipurpose space at the centre of the exhibitions earned the Écomusée an Opération patrimoine architectural de Montréal excellence award in 2002. The Généreux public bath has incredible value as a work of architecture and as an aspect of the local identity, since it reflects the daily reality of several generations of residents of the neighbourhood.

Faithful to its community roots, the Écomusée du fier monde contributes in several ways to the construction of today’s neighbourhood. Its virtual exhibition Citoyens: hier, aujourd’hui et demain! showcases a number of men and women who marked Montreal’s social history and who now contribute to the public good. Its annual benefit auction of dozens of works of art by the many artists in the community raises funds that are shared among the Écomusée, the artists and selected community organizations. The museum also hands out an honorary distinction, the Ordre du fier monde, to persons or groups who have made a significant and exemplary contribution to its mission. The Écomusée also carries out projects in collaboration with adults learning to read and write, such as the photographic work Voici notre quartier! which gave voice to these adults and allowed them to share their vision of the world. In addition to its “traditional” museum collection of objects and documents, the institution has an “ecomuseum” collection of buildings, events, places and people with special meaning for the community, but which it cannot acquire, thanks to a community designation process.

The industrial history of the Centre-Sud neighbourhood

Since the Centre-Sud neighbourhood is located near the Port of Montreal, industrial development began toward the middle of the 19th century and increased after the construction of Canadian Pacific’s railway workshops in 1882.

Like everywhere in the Western world, the industrial revolution in Montreal was based on a large underpaid labour force. Much of this labour force came from rural regions, where the scarcity of good farmland was forcing more and more people to seek employment in the city. Montreal’s industrial development drew thousands of unskilled workers, who in turn contributed to the city’s development. In general, workdays at the shops were long, and working conditions were difficult. Women and children often had to work to meet the family’s needs. The main sectors of activity in the Centre-Sud neighbourhood were leather, textiles and food.

In 1950, several shops began moving or closing, and major works including the development of the road network and construction of large buildings requiring the demolition of businesses and residences gradually and profoundly transformed the neighbourhood. Several television companies set up shop, and huge administrative office buildings were built like those of the Sûreté du Québec and the Confédération des syndicats nationaux. While community organizations came to the aid of working-class citizens hit hard by unemployment, thereby preserving a piece of the neighbourhood’s traditional social fabric, artists benefited from cheap spaces and recycled some of the disused industrial buildings, such as the Grover building. Today, the transformation of the Centre-Sud neighbourhood, now much more diverse than it used to be, continues.